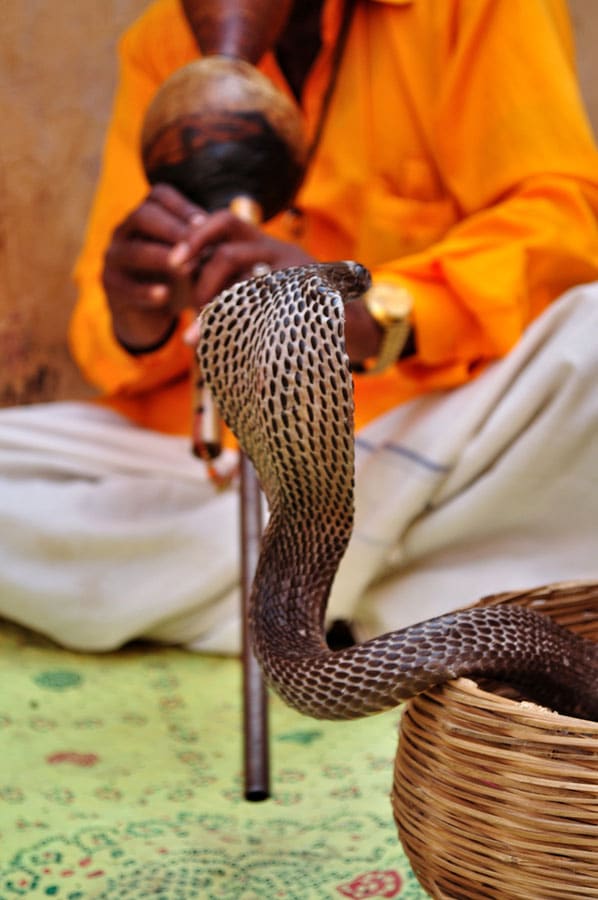 At some time or the other, when we see the snake charmer sitting with crossed legs, blowing his flute, it makes us awestruck, as at that time, his venomous cobra, wakes up from the basket and spreads wide its puffed-up hood, rocks its hood hither and thither in tune with the music. The snake charmer song  has captivated and hypnotized snakes and the audience since centuries. The first  snake charmers originated in early Egypt. Actually, the snake is deaf and reacts more to the sense of the movement of the flute-like instrument.

The act of pretending to spellbind or hypnotize a snake by playing a musical  device known as the pungi is called snake charming. This includes characteristic acts like holding a snake or doing other noticeable risky performances and also several other acts on the street, such as hand tricks and juggling. It is in India that we usually see this, even though you can also see performers in nations in Asia like Bangladesh, Thailand, Pakistan, Malaysia and Sri Lanka, just like the North American countries of Tunisia, Morocco and Egypt.

Earlier Egypt practiced snake charming in some form or the other, but the practice of snake charming we see today started in India. It ultimately reached all over Southeast Asia, North Africa and the Middle East. In spite of the some kind of golden age celebration in the 20th century, today snake charming is in extinction. This accounts for several factors, mainly the current enforcement order of 1972 that banned owning snakes. Against this, the snake charmers recently joined together and objected the loss of their only source of income, for which the government made certain proposals to them. One of the first mention about the snake charmer appeared in the Bible, Psalm (58:3-5): The wicked turn aside from birth; liars go astray as soon as they are born. Their venom is like that of a snake, like a deaf serpent that does not hear, that does not respond to the magicians or to a skilled snake-charmer.

The snake charming that we see today, perhaps had its origin in India, Hinduism, considered  serpents sacred; they believed that animals had a relationship with the Nagas, and several pictures of gods portray cobras protecting them. Therefore the Indian people consider snake charmers as sacred.

The foremost snake charmers were more of  customary healers by profession. In the course of their training, they studied how to heal snake bites. Most of them studied the perfect way to handle snakes, and they were invited to take off the serpents from their homes. Baba Gulabgir (or Gulabgarnath) was made their teacher, because legend mentions that his teachings were to respect and not to get scared of reptiles. This practice ultimately extended to close-by regions, and finally reached Southeast Asia and North Africa.

Snake charmers in particular stroll the roads with the serpents held either in pots hanging from a bamboo pole slinging over their shoulder or in baskets. In between performances, they wrap the container with a cloth. The costume in Pakistan and India and nearby countries is usually the very long hair, earrings, white turban and necklaces of beads or shells. The moment the charmer locates a suitable place to settle, he lays his baskets and pots beside him.  He then sits on the ground crossing his legs with the closed basket or pot in front of him, uncovers the basket or pot and blows an instrument resembling a flute manufactured from gourd shell called a pungi. As though attracted  by the tune, the snake ultimately comes out of the basket or pot; In case it is a cobra, there is a chance for it to bring out its hood.

When the snake charmer is at home, he keeps the snakes in closed enclosures like pots, baskets or sacks. Prior to taking them in front of people, he trains them. The charmers, who do not de-fang their pets, put the snake in a hard vessel like the pungi. Here the snake understands that when it strikes an object, it gets painful.  Sometimes he removes the snake’s fangs. By this, it does not mean it is harmless: because the poison emerging from the wounds that remain after removal of the teeth that conducts venom, are liable to circulate. Still, the belief is  that this type of snakes does not bite, and if they do so, the danger is very much less. The Hindu knows well that his cobra is used to being teased  and handling, it dances with little enthusiasm; thus he reserves some fresh serpents with him.”
For the sake of safety, the charmers of Northern Africa sew closed the mouth of the snake that is performing, providing limited gap for the snake to make movement of its tongue in and out. This is because the audience belonging to that area, particularly believes that the snakes can bring out the venom through its tongue and not its fangs, they are convinced observing the snake tongues shine unsteadily through the gap. The reverse effect on the snake is that they die due to mouth infection or starvation, where new snakes need to be substituted.

Snakes are cold-blooded reptiles; and rely on the surrounding temperature to maintain their warmth. Scientists opine  that the temperature in the tropics of Colombia were at a time warmer by 10 degrees when compared to today.
Jack Conrad, a specialist of snakes from the Natural History Museum of America, made a remark on Titanoboa as follows:  “This snake is of weight that exceeds that of a bison and its length exceeds that of a city bus. It is capable of consuming anything as big as a cow. A person will be an instance toast” The profession of snake charming is hereditary. Therefore, those planning to practice this profession start their training at the very early stage from their fathers. In 2007 a corrupting influence of a video brought out headlines of an infant handling a de-fanged cobra. Snake charmers belonging to the association of the Sapuakela or Sapera castes,  have no other option other than this profession. Actually the whole settlers  of snake charmers and their families originate from certain portions of India and adjacent countries in Bangladesh. They particularly come from the nomadic ethnic family Bede. They most probably reside adjacent to rivers and travel by boat to other cities during festivals and on market days.
Snake charmers of North Africa normally settle in souks and open-air markets for performing. In the main tourist places and in  coastal resorts, you can observe charmers preparing food for the tourists, but in many other places they play snake charming for the local audiences; A main source of income is selling pamphlets of magic related cures for snake bite.
However, now in India, snake charmers have been given a new lease of life, that of supplying snakes to vaccine collection centers, like those promoted by the famous Whittaker in South India. They collect the poisonous snakes in the wild, bring them to the centers for venom extraction and leave them back in the wild for rejuvenation and recollection another day. This has helped the community of snake charmers to make good money as the prospects of their earlier profession are on the decline.