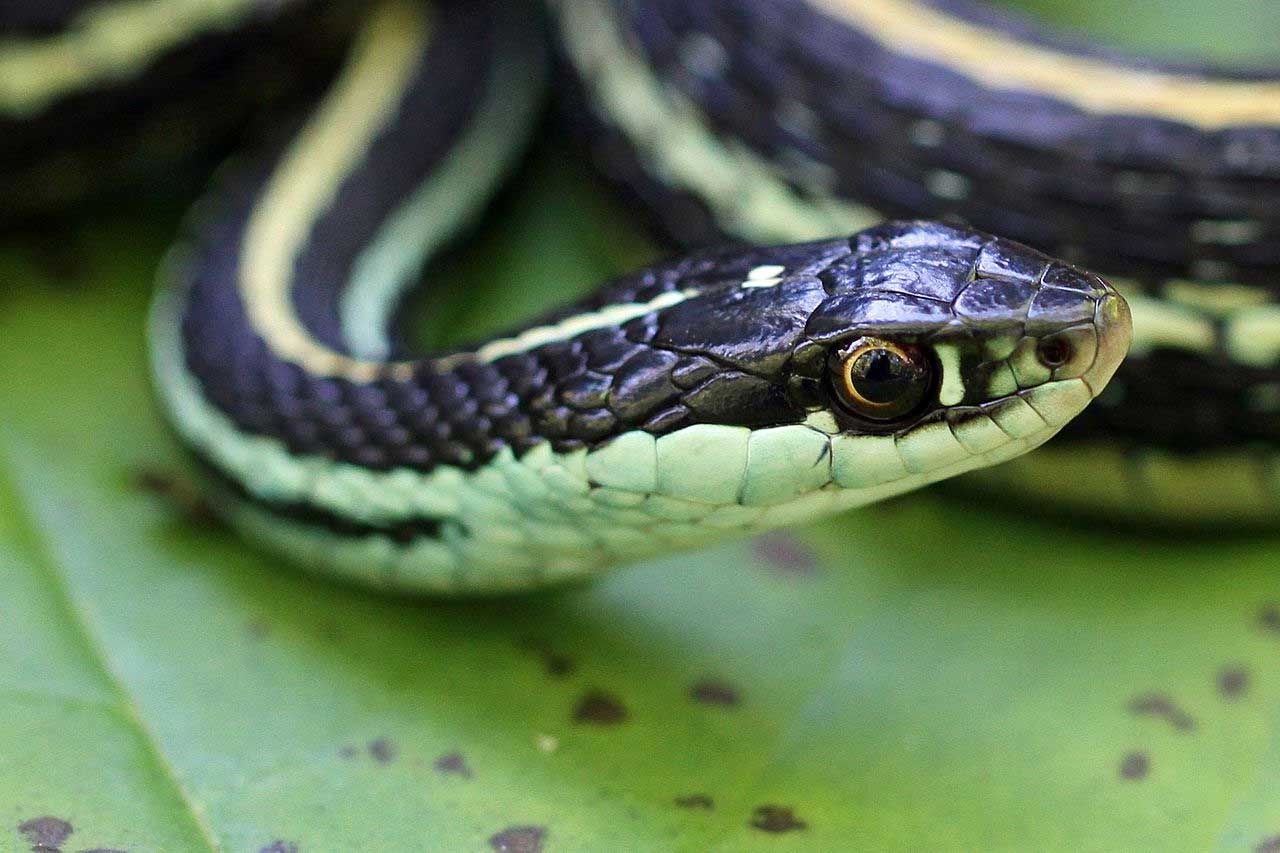 The Ribbonsnake or Ribbon Snake,  biologically named Thamnophis Sauritus, is a normal variant of the garter snake, widespread in the eastern regions of North America. These snakes are associated to the genera Thammnophis and measures 16 to 35 inches (41 to 89 cm) on an average.

The four different types of ribbon snakes identified are given below This snake is named Eastern Ribbon Snake because of its extremely slim body. When fully matured, it measures 18 to 86 cm. This slim black snake possesses a yellow colored stripe on either side of its back from the middle. On either sides of the belly it has 1 or 2 rows of brown striped scales. The remaining part of the belly is colored light green to white. In between the black stripes and the side stripes you can find black spots. In addition, it has a lengthy tail about 1/3 the length of its body. The lip scales, surrounding its mouth have no markings and are colored white or bright yellow all over. The front of the eyes is bordered with a dull yellow or white bar. The color of the young ones is same as that of their adults.

When you capture a Ribbon Snake, or it is terribly distracted, or roughly handled, it wriggles around violently and sprays its anger emitting a nasty strong smell of the anus gland, expelling feces. Besides, it is able to shed off its tail, which in turn will wriggle about putting the predator in bewilderment when it takes this opportunity to flee. This discarded tail will not form again. Researchers conclude that one-third of the female Ribbon Snakes that are captured are those that have earlier shed their tails. But a lesser percentage of male snakes do not have tails. This information leads one to believe that this variety has a high degree of predators and also shows a rise in the vulnerability of female snakes to predators (especially when they are gravid with the young)

The Ribbon snake that is agile and curious will observe you carefully the way you observe it. In captivity, this snake seems to take pleasure in parading through the foliage, boxes, toilet rolled tubes and similar places to hide. In case you place clean peat in the tank, it is likely that they burrow in it. This snake is very smart in escaping through holes that seem very tiny and in astonishing ways. Ribbon Snakes in general, make good pets as well. These snakes are very quiet. A tank with a capacity of 10 gallons will do well for one ribbon snake.

Mating takes place in the month of May (the ribbon snakes attain the stage of reproduction when they are 2 years), and they hatch the new babies in the month of August. They litter around 3 – 26 young living snakes.

Similar to all varieties of snakes a couple is essential to breed, but you are lucky if you have bought a pregnant female snake. The size of the adult males is comparatively small 18-24 inches (45 – 60 cm), and  their tails are also long. The build of the female snakes are sturdy and lengthier 24 – 36 inches (60 – 90 cm). Exceptions occur, hence you would do well to inquire with a professional.

There are varieties that need to hibernate to persuade breeding during spring. Three to four months following mating they give birth to the young snakes. At the earliest, separate them, because there is a chance of the adults consuming them.

The minimum size of a terrarium for a single snake is a capacity of 20 gallons, with a lid that is tightly fitted, as they are sure to try to flee.

Facilitate hiding in several places, by placing leaves and making hideouts. Also keep branches for them to climb.

Provide a temperature of 85°F towards the warm area and 65oF towards the cool area at daytime and at night keep the temperature of the warm portion to 68°F and 59°F at the cool portion; Provide a ceramic heater or an incandescent lamp as the main source of heat. And as a means of secondary heat, provide a heater below the tank.

require a cyclic period of 8 to 12 hours, to receive light daily. A total spectrum of UV light is a must, because they are diurnal. Switch on the light for a period of 12 to 14 hours. In case you feel, your Ribbon Snakes need a resting period in winter, well then reduce the lighting hours and reduce the temperature in the terrarium. In such cases, be certain that their digestion system is empty. It is possible that food left undigested in its system can kill them.

Their preferable choice is earth worms or fish and insects (Even though some ribbon snakes never eat insects); besides they eat newts and frogs.

These ribbon snakes also prefer feeder fish. Crickets, tadpoles and earth worms and you can give them this stuff weekly twice. Make certain that you vary their food habits. Even though their favorite dish is fish, substitute this occasionally with frogs and worms.