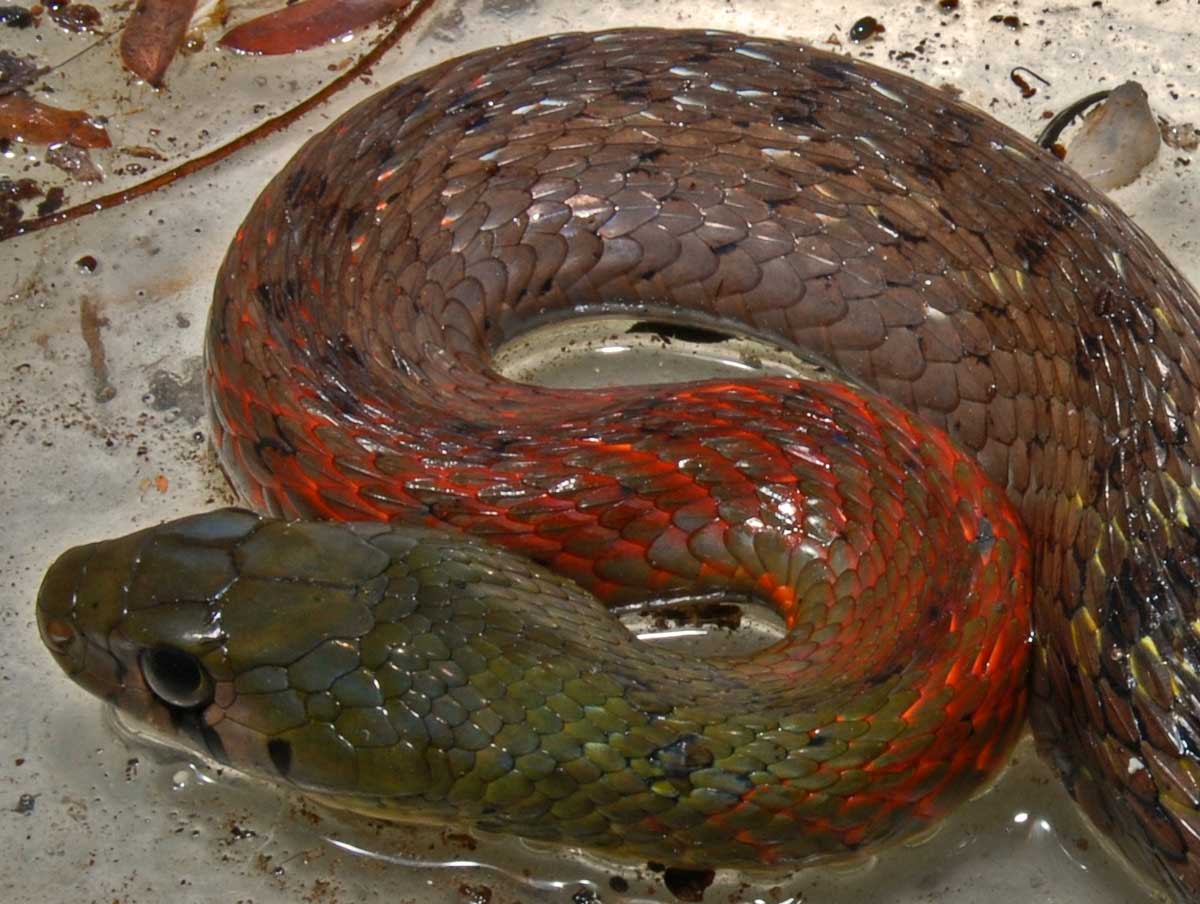 The snake Rhabdophis Subminiatus, called the Red-necked Keelback, belongs to the Colubridae family of snakes. This snake has a green tint, with yellow and red portions about the head. The length of this snake is 70-90 cm (28-35 in). This snake, which measures not more than one meter is an attractive snake, and not troublesome.

The fangs of this Red-necked Keel back snake are placed at the back. Earlier it was considered harmless. Despite this, later on, by one or more nearly poisonous inflictions, a study was conducted on its venom’s toxicity. Of late, this study showed that it belonged to the group of hazardous varieties. They were now recognized as rear-fanged, which means that, in the process of injecting the venom, ducts situated behind the oral cavity open up and the venom is injected into the person by gripping on to the person or continuously biting in order to inflict the victim.

This reptile is the lone genus of snakes on this planet that displays the twin effect of venomous and Poisonous features at the same time (The poison oozes from the neck glands and it delivers its deadly venom through its rear fangs). The characteristic features of this poisonous red necked snake are big eyes, large head in comparison to the body that is thin and long, (about 110 cm.) Its color is olive or gray-green with a tint of yellow and red. They have large eyes. At times, the younger ones do not show the red color; however, at the rear of the neck, they have a big black spot and a dim black mark on the body.

The design of the adults is complicated. The body is colored olive to brown, sometimes plain and otherwise, with markings of black and yellow. This feature gradually changes in stages, to yellow and red on the head and nape.

In order to have a bigger appearance, this Keelback Snake expands its neck, though the effect is not as impressive as that of the cobra. They raise their neck and head, 4 to 5 inches above the ground. You can see the Red-necked Keel back snake in the following world regions: They consume vertebrates living in water like, tadpoles, fishes and frogs.
Keel back snakes consume toxic cane toads and even frogs. These snakes are the only variety that is resistant to the poison of the cane toad.

These snakes are more like the garter snakes and are passive while handling.