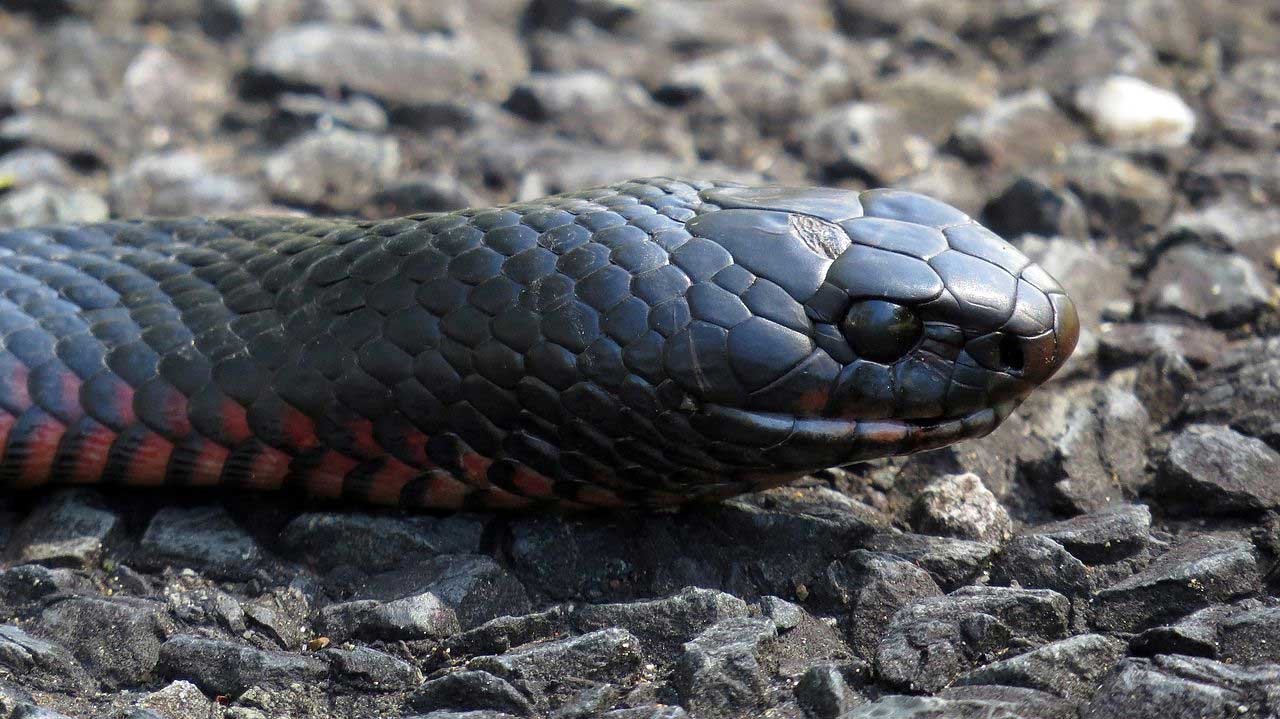 The snake, Pseudechis Porphyriacus, biologically called the Red Bellied Black Snake,  is a variety of Elapid snake,  inhabiting the Eastern regions Australia. The venom of this snake causes a notable sickly feeling; normally its bite is not that deadly and compared to the other Australian snakes, it is less poisonous. We often see them in Eastern parts of Australia’s swamplands, forests and in the woods. You can frequently  find this Snake  in the urban regions of the east coast of Australia, and so, it is one among the Australia’s well known snakes. The aggregate full length is 1.5 to 2 m. The back portion of this Red Bellied Black Snake sports a black color and its belly’s lower sides are colored pink or crimson. The color of the snout is pale brown. This snake is comparatively a big one, attaining a length of 2 m, The normal size of this specimen is nearly 1.4 m. Similar to the Elapid snakes, this one too has its venom-tooth in the front. In the middle of the body, there are 17 rows of scales. The  immature snakes resemble the eastern small-eyed snakes and to differentiate between the two is difficult.

This Snake grows to an average size and has a  reasonably sturdy build. Its head is very prominent from the thin neck. The body and rear side of the head are colored black throughout, but the snout is light brown in color. The scales on the bottom most sides and on the outside edge of the abdomen has a  brilliant crimson color, diminishing to faint red, pink or orange towards the belly. In the northern regions, the color of the ventral portion is white to a mix of gray and pink. Below the tail it is black. The scales on the body are silky and smooth. The moderately sized eyes are shaded by a clear ridge,  brown in color. The pupil of the eye is round shaped, with an extremely dark iris. There are 17 rows of scales on the middle of the body, 170 to 215 on the ventral side. The scales towards the anus are divided, with a single color at the  tail end. At the buttocks have divided scales (infrequently all are single in number).

Normally the snake is not violent, but if aggravated, there is a chance for it to retreat with a striking pose,  threatening you. At first it attempts to escape. It is very energetic at daytime. At the time of rest, when it is not basking or hunting, it is found under rocks, timbers and garbage or in burrows or holes. The  Black Snake (Red-bellied),  is an inhabitant of the eastern coastal regions of Australia. You can see them in the woods, bush lands, and plains of Canberra, Melbourne, Blue Mountains, Sydney, Cairns, Brisbane and Adelaide. Very often you can  find them adjacent to streams, dams, billabongs (isolated ponds),  and in several water bodies.
This snake has frequent acquaintance with rivers, streams, swamps, creeks and other wetland areas. They also live  in properly vegetated personal gardens, close to sources of water.

Quite different from most of the other types of snakes,  these Black Red-bellied Snakes deliver live young ones. They are born draped in a thin, transparent; this membrane that tears  easily to allow the tiny snakes to  struggle for their freedom. In a single litter, it gives birth to 20 baby snakes.

The minimum size of a terrarium for a single Snake is 2.5 ft x 2.5 ft x 2.5 ft. Generally they require sufficient area to move about. Place hideouts, plants and climbing facilities in the enclosure. This variety of snake is always sluggish as they like to bask.

At one extreme of the terrarium keep a heating pad. Similar to the other mammals, this Snake  exhibits exothermic features,  favoring warm as well as cool places inside their enclosure, for regulating the temperature of their body.

The food of the Red-bellied Snake consists of different vertebrates, like tadpoles, lizards, fish, frogs, snakes (even their same variety) and reptiles.

When they are in captivity, these snakes warmly receive mice and rats as food, They are gluttons. They eat raw chicken, fillets of fish and canned dog food.

Once they get hold of their prey, they gulp it down, even prior to the poison entering it completely. The captured reptiles have a history of  regurgitating living frogs, which means it did not use its poison,  or perhaps the frogs are resistant to the poison.