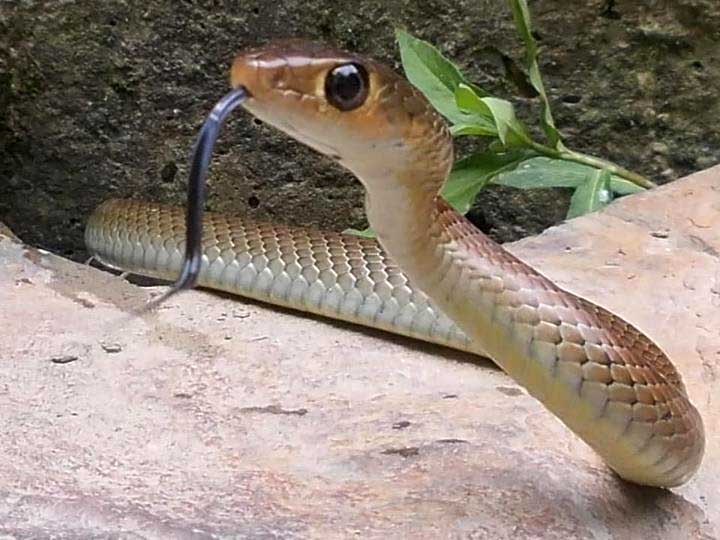 You can find Rat snakes all along a great part of the Northern Hemisphere and they can be described as a medium to large constrictor. They feed on rodents and birds, usually. Some of these species exceed 3m which is 10ft in their total length and they occupy the very top level of some food chains, known to mankind. The rat snakes are very docile in nature when captive and this makes them ideal as a pet. The corn snake is widely considered as one of the best pet snake anyone has ever known. An adult rat snake can be between 3 and 5 feet or  91 to 152cms in length, but the larger ones exceed 6ft or 183cms in length. Mostly the geographic range determines the changes in their appearance and size. The Black rat snakes, which you find in the northern half, have a very blackish patch on the top with some faint white colors, which are visible between the scales. The Yellow ones can have predominantly green, yellow or orange color, but they would all have very prominent dark stripes, which would run along the length of the body. The Gray Rat Snakes vary from being light to dark gray and would have brown blotches or darker gray color on their body. Surprisingly enough, the juveniles would look similar to the Gray Rat Snake. The bottom portion or the belly part is whitish around the head and would usually become checkered or mottled towards the tail part. The body-cross sections are not really round, but loaf-shaped instead. The anal plate of the rat snake is divided and they have weakly keeled scales.

The rat snakes are very friendly and active by nature. They are diurnal, but sometimes they are awake and really active during the daytime and will sleep during the night time. At times, when they feel threatened, the snakes would assume a kinked position and would become absolutely motionless. The tail is the only part that would rigorously vibrate and they will release a  very foul odored musk.

You can find Rat Snakes along a very wide range of habitats. They exist throughout the Southeastern and the Midwestern states, which extend as far north as the southern New England and southern Michigan. Their habitat also includes the mountains and the Piedmont regions of central Georgia and South Carolina. The yellow rat snakes are most likely found along the coasts and the gray rat snakes inhabit the regions of southern Georgia and along the Savannah River in Southern South Carolina. The rat snakes can endure much and possibly that is why they are known to live in places which has rocky, wooded hills, or even in the hardwood forests, in the river floodplains and swamp margin as well. No wonder, you find them  in abandoned buildings and barns, where they have their quiet. One fun fact, which probably the world knows, is that people often consider them  as the more commonly known large snakes found in the suburban areas. To accurately determine the sex of the adult snakes it is important that one uses the method of probing. Although it is quite possible for a veteran to understand which gender the snake belongs to by examining their tail, still probing is considered to provide accurate results. You can sex the hatchlings by applying a method which involves one to manually avert the hemipenes which they also call popping.  These methods or probing or popping should always be carried out by a veteran or someone who is absolutely sure about what he is doing, or it might end up harming the snake or even killing it. Brumation or hibernation of sorts is a process that every snake of such kind undergoes, before they set on to breed, Rat snakes have even bred under normal conditions. A typical clutch is known to consist of about six to twelve eggs, but this number can vary. The process of incubation would require 60 to 75 days, under an average temperature of 81F. The species do not create much hassle when they are made to breed and even produce very large, durable and easy to hatch eggs. These are the reasons why the amateur breeders must begin their journey by first breeding such species of snakes.

These snakes are good climbers, or semi-arboreal. This is why the tank must have some good height, so that there is enough space for the snake to climb.   Also,  a good latch is necessary. Always remember that a snake has enough strength to unlock a very loosely attached latch and escape. They are good escape artists in nature and so the extra secure enclosures are the best option when you are attempting to pet such snakes.

A water bowl, which would fit the entire body of the snake, is an absolute essential. Along with that, you must provide a good substrate which acts as its hiding place. When in the wild, the Black rat snakes would spend their time in densely forested areas, and every owner who wants to keep this snake, much have a hide out that resembles the wooded areas. A  Jungle Mixor a Repti-bark is a good option.

Although rat snakes prefer cooler temperatures that many of the other snakes, to prevent them from going into a state of hibernation, it is important that you maintain a temperature of 80 to 85 degrees on the warmer side of the tank and make sure it never drops below 70 degrees along the cooler side, or at night.

The baby rat snakes usually require two meals per week, but when it comes to the adults, it depends on their appetite. While some would require only one meal per week, others might prefer getting fed twice per week. They usually like rodents, whose size must be determined according to the size of the snake itself. It is important that you feed fresh, but pre-killed prey to your snake. Firstly, it is illegal to feed live animals to the snakes in the UK, and the live animal feed tends to cause harm to your pet, which is absolutely not desirable. The food must be de-frosted and brought back to the room temperature. If your snake fails to prey on a particular de-frosted rodent, then throw it away instead of trying to keep it back in the freezer. While shedding, the snake might not eat at all;  not to worry. Try to feed it once they are done shedding.

The snakes must have a free supply of fresh water at all times.

Rat snakes are very safe and good pets; all you have to do is keep an eye on the tiny ones as they are very fast. Be gentle and nice to them and never try to agitate them, as that act would not bring any joy to you and can be fatal instead, for your pets.