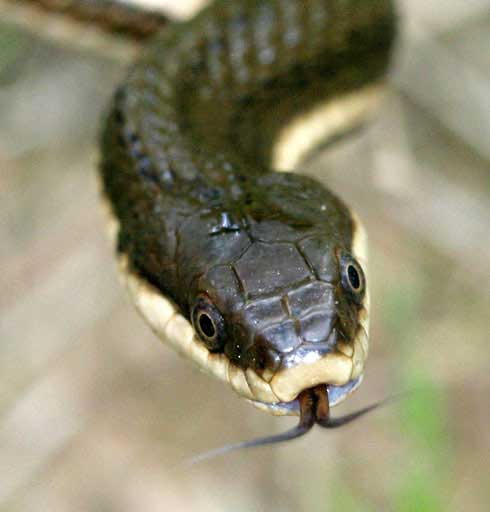 The Queen Snake Regina Septemvittata, belongs to the sub-order Serpentes, family of Colubrid snakes and are very much a non-venomous species. You can find them along parts of North America. The queen snakes grow up to a length of 24 inches and are fond of water with fast to moderate currents and at times, you can see them basking on the branches of the trees,  particularly elevated parts of the tree that  are close to the pond. The queen snakes inhabit areas with spring-fed streams that have clear water and around those water bodies, which have rocky bottoms.

The queen snakes are directed towards their prey by ability to smell. Sadly enough, captive bred queen snakes do not perform that well, because people fail miserably when they try to feed the snake with a specialized form of a diet. The scales of a queen snake, that usually ranges in length from 15 inches to about 24 inches, are keeled in form. Even more, there is a ridge-like pattern which runs along the length of these scales, which are in turn is responsible for the rough look of the snake. The queen snakes are known for their different colors; while some of them are Olive in color; some might vary from being brown, darker shade of brown and even at times,  black. The color around their belly is either cream or yellow, extending right up to the point where their lower jaw begins,  and running along the very length of the body,  the point where the second scale would begin. The very first row of scales is usually covered by the two brown broad stripes that would run until it reaches the ventral scales which are situated in the snake’s body. There are possibly two such centerlines which would run along the length of the snake’s belly, and it might just disappear into thin air once it reaches the part where the tail begins. On a very rare occasion, some dorsal stripes, usually three in number might be present,  but as time passes by, they may fade away.

If you observe closely, you will see that the queen snake’s head is relatively narrower and that they even have nine scales,  that mostly look like plates. Even their chin would have some scales which are much thicker than the usual ones. The thick scales provide some protection to save them from any wear and tear as a snake would go about slithering after its prey. They share almost every feature, with the other Colubrid species,  including the round pupils present in their eyes. These snakes have a divided anal plate, and they have around 19 rows of the scales around their mid-body segment.

Queen snakes do love an aquatic life and you can often see them basking  on elevated platforms near the water bodies. They are active during the day. When dusk nears, you can see them crossing roads from one point to another in search of a resting place. The queen snakes are close friends with the northern water snakes known scientifically as Nerodia Sipedon, as they are often found to be chilling by the water bodies. These snakes take rest somewhere, maybe under the rocks that are found along these streams. Moreover, they hate the hard shelled crayfishes and prefer mostly the softer newly molted ones.

The queen snakes are mostly rumored to have lived along the eastern half of the United States,  but, they often count as one of the rarest snakes to be found in the New York State itself. While stories of their appearance in the western parts of the US persist, only a few of such encounters with the queen snakes have been recorded, primarily because these snakes hate to move away from the water bodies. They thrive in the water, and that is their basic requirement. To be more elaborate, they love the shallow streams which have a rocky bottom with warm water. The cover that they prefer as their hideout, may either be branches, or the rocks by the stream or even some plants which are aquatic in nature. Other than the elevated lands, the queen snakes also prefer the debris found near these water bodies as a suitable place to bask in.

It is hard to breed a queen snake in captivity because of their peculiar feeding habits. Since They like only freshly molted crayfish that you can hardly get on a daily basis, and  they refuse to eat most of the time. And thus, it becomes problematic for one to keep them.

Spring, or to be more precise, the month of May or even late July is the ideal time for queen snakes  for their mating. They can give birth to live snakes,  which vary in number from 10 to 14. The juveniles are never more than 7-9 inches in length, and they grow almost up to 80% in the very first year after their birth. Although they wait until they are three years of age, the snakes are very much capable of reproduction when they attain two years. 50 degree Fahrenheit is the optimum temperature,  which the queen snakes require to survive. Like any snakes in general, a queen snake too is a cold-blooded animal, and that is the reason  they would require such a setting to survive, which also keeps them active and allows  them to hunt

Clean water, is another very important aspect. The queen snakes live right beside the clean water, and if they are being denied similar water, it might affect them.

By keeping some rocks in the enclosure, it will let them bask and because of that, the temperature of their body might go up, which is desirable. The queen snakes hibernate and so you would have to give them the space to hibernate.

Newts, tadpoles, soft kind of shelled crayfishes, at time’s snails, are some of the things which the queen snake loves to eat. Since they are devoid of any form of teeth, they cannot feed on hard or solid like shells or any solid food.