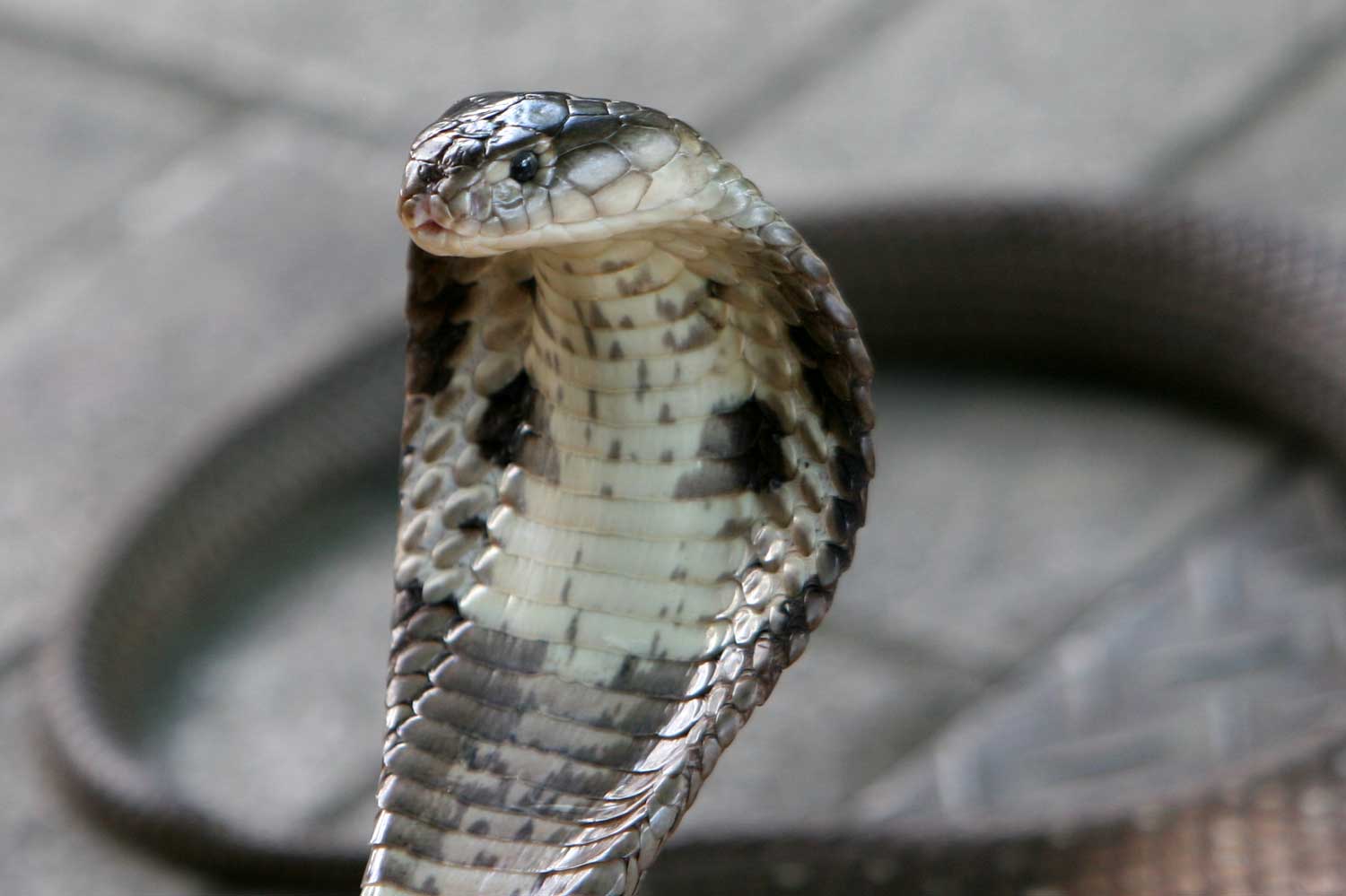 The monocled cobra,  Naja Kaouthia,  is otherwise called Monocellate cobra, and it belongs to a cobra variety endemic to the southeastern regions of East Asia and South Asia. In contrast to the Indian cobra, the monocled cobra sports an O or Monocellate pattern on its hood. The color of the young cobra remains stable, with the color of the dorsal part as brown, black, yellow or gray. The cross bands are either very clear or ragged. They can also have an  olive color or shades of black and brown, and yellow or orange monocles on the hood may be present or absent. On both sides of the lower exterior of the hood there are black spots,  and behind the belly,  You will find one or perhaps two black crossbars.  The remaining portion of the belly is normally colored identical to the back,  but a bit duller. The color fades with age, and turns olive or brown tinted when they turn into adults. The stretched nape of the nuchal ribs permits the cobra to enlarge the frontal part of the neck in the shape of a hood. There are two permanent frontal fangs. The biggest fang documented is 6.78 mm (0.678 cm) in length. The fangs are reasonably tailored for spitting. The length of an adult monocle cobra is 1.35 to 1.5 m (4.4 to 4.9 ft), the length of the tail is 23 cm (9.1 in). There are instances of bigger specimens, but only a rare phenomenon. The greatest length an adult attains is 2.3 m (7.5 ft).

The number of cuneate (straight sided wedge-shaped) scales on both sides can exceed one.

The frontal scales are square and short.

It has an upright head and flat neck. The head flashes fairly wide in contrast to that of the body and flares wider than that of the King Cobra. Monocled cobras live on land; they are agile at dusk and towards the evening. They hide from view in the burrows of the rodents in rice fields in the dykes that supply water, thereby becoming partially aquatic. Amphibians are the normal food of the juveniles, whereas the adults eat snakes, small mammals and fish. When they are agitated, they try to escape, but only rarely are they known to be seen spitting venom. Even then when they are scared, they lift the frontal part of the body, stretch their hood and generally hiss with loud sound and go through the motions of a strike. You can normally see them in places where rodents are found in great numbers and in the holes in trees.

The Monocled cobras are widespread in the west from India up to China, Cambodia and Vietnam. They are also seen on the Malay Peninsula and in Bhutan, Laos, Bangladesh, Thailand, Myanmar and Nepal.

These reptiles are adjustable to a wide range of habitats. They favor dwelling in places adjoining the water, like, swamps, mangroves and paddy fields. You can also see them in shrublands, grasslands and forests, and in cultivated and residential areas, including f cities. You can also find them in hilly places, 1000 meters (3,300 ft) above sea level. In captivity, you normally feed these snakes throughout the seasons, but when the breeding season nears, refrain from feeding them just a month before the cycle. During September retain the temperature as usual and do not feed them. At this time begin to reduce their provision of daylight to 12-off, 16-on, 8-off to 12-on, Later mist their tank thrice a week. By the beginning of October every provision for heat and light is switched off. The frontal view of the enclosures is wrapped either with blankets or newspaper in order to obstruct light. During the month of October retain these reptiles in complete darkness.

The majority of the Elapid snakes is quite agile; they need sufficient moving space for exercising and climbing. The length of a fully grown monocle cobra is 6 to 7 ft. The standard size is 4.5 to 5 feet. You can keep an adult snake in a transparent cage of about 4 feet. The substrate used is newspaper. You can also use aspen and cypress mulch. The reason why many prefer newspaper as substrate is that, the snakes cannot swallow it while feeding. In the cool and warm extremes of the tank provide shift or hide boxes. Low watt bulbs and heat tapes sustain a high temperature of 80° on the warm side, and keep the cool side at about 30 to 40 F. Mist the tank several times in a week to maintain the humidity at about 60%, Keep sufficient clean water in a container for the snake to soak in. Place younger snakes in hand -made wooden cages with a door that open in the front, but with a reduced size of a cage. Hatchlings are taken care of in rack arrangement with tubs made of plastic as big as a shoe box. The light may not play as important a part as the temperature does, in the breeding cycle of monocles. You can keep a timer to operate the lights while bringing up adults. During the spring, switch on for 12 hours and switch off for 12 hours. A 20 gallon cage for the juvenile and 55 to 70 gallons for the grownups seems ideal housing. These monocled cobras are timid, so provide one or two plants (artificial or natural) in the cage, but to be on the safe side, ensure that they are not toxic. Otherwise the snake will not come out of the box for relaxation. Do not over pack the cage, causing hindrance.

The diet of the monocled cobras consists of toads, rodents, frogs, fishes and also birds, and snakes, including the poisonous ones, and tiny mammals.. Monocles are voracious eaters, but they cannot swallow large food portions like other snakes.. They prefer feeding on prey that is smaller. You can give them 20 inch young snakes 3 or 4 pieces of mice and not a full mouse. You can subsist your Monocles by giving them a diet of thawed/frozen rodents. For example, you can feed a four foot Monocled Cobra with 2 average size rats weekly twice. Feed the middle aged ones 3 or 4 big mice twice a week. The juvenile eat fuzzy and pinky mice.

Adopting a suitable protocol, and with a bit of general knowledge, it is possible to deal with this monocle cobra in a safe manner. However, take care that they do not meet with any accidents. Avoid mistakes with this very venomous animal or you will regret.