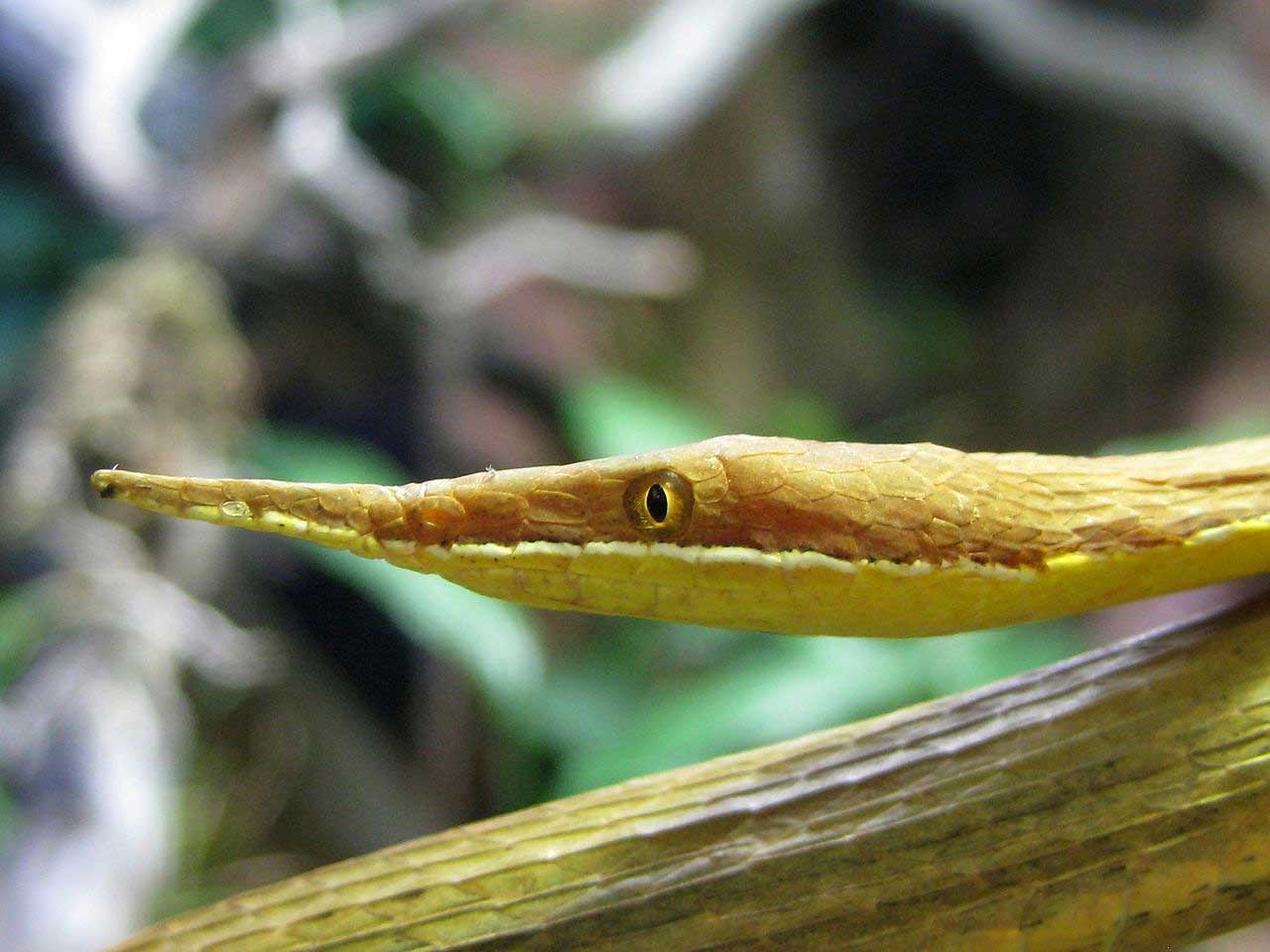 The Malagasy leaf-nosed snake belongs to the species  Langaha  Madagascariensis. They are a species of poisonous snakes, also known as Madagascar (Leaf-nosed) Snakes.  These snakes have characteristic scaly appendages on the snout. These reptiles get their name from these leaf-like structures. The appendages appear jagged and leaf-like in the females while the scales are long and tapered in the males. The real function of these structures still remains a mystery. The snakes are arboreal and are enigmatic.

The Malagasy leaf-nosed snake is venomous and  rear fanged. A bite from this snake can cause a lot of pain. There will be a swelling at the site of the bite. However, their bite is not known to inflict serious bites as a bad bite, normally is the consequence of the snake chewing on you, which is unlikely, as they are good tempered snakes.

These species are  members of the Colubrid family. Malagasy Leaf-nosed snakes are found only in Madagascar. They inhabit rain and deciduous forests.  They prey or invertebrates and small animals that they catch from the trees. Their strong venom kills prey instantly. The venom is not fatal to humans,  even though it can be extremely painful.

Leaf-nosed snakes are the most unique among the snakes of Malagasy. In fact, this snake is so unique that there is no other snake in this genus. The snake finds a place in the book Ophiologie, a 1790 book that describes eight genera and 224 species of snakes.

The camouflage of these snakes is so brilliant that they  are almost impossible to locate. They just look like twigs or a vine. This has two advantages. They can easily catch prey using this camouflage and avoid predators at the same time.

Many call Madagascar the eighth continent  for a few valid reasons. The large size is one reason. The habitats are unique.  There is a high degree of Flora and The Fauna and a variety of linguistic and cultural inputs. The species are sexually dimorphic. The males have dorsal brown and yellow ventral color. They also have long, tapering  (spear-like)  snouts. Females have drab mottled gray color and leaf-shaped snouts. Males also exhibit white stripes running down the side. The flanks and belly are bright yellow.

The nasal appendages of these snakes are really bizarre.  Nasal appendages of the females are elaborate and serrated. The males possess longer, more pointed appendages. These appendages are present at birth itself.  The implication seems to be that these structures do have functions beyond signaling (sexual)  between  rival males.

These snakes are natives of Madagascar.  We can find them in rain forests as well as deciduous (dry) forests.

The Malagasy leaf-nosed snake stresses easily,  and only experienced snake keepers can opt for them as pets.You can often see these hanging upside down from the branches.  Are the snakes doing this to drain the water off  their body?  When hanging like this, they resemble  the pointed, long- seed
Pods of  certain plants of Malagasy, including some Bignonias  (a kind of cross-vine) and Legumes. Are they trying to mimic these, with their nasal structures and their posture? We cannot be sure.
Malagasy (leaf-nosed) snakes always wait to ambush prey. Even their resting behavior is curious. They rest upside down, straight from the branches.

You can maintain these snakes easily. They are wonderful to observe and feed. They have one distinction that is quite unusual in Colubrid snakes.  You can determine their sex even from a reasonable distance.

There is not much information about the snake  breeding or behavior in the wild. All knowledge comes from the observations of the behavior of captive snakes, especially from the Florida Museum, from  Kenney Krisko. These snakes are egg layers. At the time of hatching, the nasal structures of the juveniles stay in a folded state. This enables them to break the eggs with their egg teeth. The appendages reach their normal position within 36 hours. The juveniles show the same upside down hanging behavior of the adults. According to Krysco, this posture might be deterring predators. There is not much information also about who the predators of these snakes are! For the snake’s enclosure, you can try  using a  40 gallon tank equipped with screen tops, live plants and branches along with garden soil for substrate.
Leaf-nosed snakes need no large cages. But, they need a lot of security and cover.  So, provide branches and plants in the enclosure. They usually feed on Frogs or lizards.  You can mist the cages daily and keep them well-lighted.
You can keep them at room temperature. The basking temperature can be around 80 degrees F. Since they inhabit both rain forests and deciduous dry forests, with extended dry spells, their requirements oh humidity may not be consistent.
These snakes will do well in captivity as long as they get enough water and humidity. They may lick droplets,  or drink from the water bowl. The humidity can be 60 to 70%.

You can feed them with  house geckos and Anoles two times a week. You may not get to see them eat, but the preys disappear in a couple of days. Try  keeping a pair of these snakes and feed them a few geckos. Most geckos vanish in day one itself.
The venom is not a medium for these snakes to immobilize their prey. They use their teeth first to  grab the prey and hold them in their coils. The rear fangs dig in only after the prey moves into the mouth.

These snakes  are about three feet in length. Use heavy duty gloves to handle them. They are not very aggressive. But they do bite, but seldom.
The venom content in these snakes is not conclusive as  taxonomic assessments  have not yet been conducted. It is a fact that no human fatalities or serious injuries from the bites have ever been reported.

The lifespan of the snake is around 3 years. They thrive well in captivity and they do not seem to be bothered by parasites.

Beautiful, unique Madagascar, As a result of savage deforestation and illegal incessant logging, slash and burn agriculture and  human encroachment of its wild habitats is quickly losing out on its pristine environment to to human greed, as you can see all over the world. The remaining forest area is dwindling rapidly. If immediate and effective conservation measures are not taken, including the support of the communities that live on the biodiversity of the environment,   our children may never get a chance to find the real use of the leaf-nosed snake’s nose.