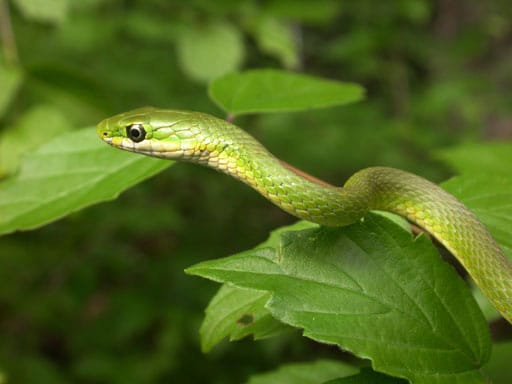 It is because of the solid green color, on the dorsal part of the skin, with a crash or a yellow underside, that these snakes are known as the Green snakes. These snakes would very rarely cross a length of 90 cms or around 36 inches, and hence are truly tiny in size. They can be characterized as having blunt shaped heads that consist of very large eyes. Both of the two distinct species found along the North American areas are known to be emerald green in color, with a very pale yellow or a creamy color around their belly, but when they get excited, they would often undertake a very light yet distinct bluish shade.

An area which is heavy with vegetation and near  to some permanent water body is the favorite haunt of these kinds of snakes. Very oddly enough, these snakes can follow human activity and  hide or camouflage, in the trees,  using  their green color. But mostly, when they are threatened, they would much rather escape.

These snakes are not really active after nightfall, but they would much rather prefer the daytime. Again, their skin color lets them blend in very nicely with the green foliage, and that is possibly why it is very difficult to find a rough green snake. Both rough and as well as the smooth green snakes have the same kind of care routine when they are bred in captivity, most probably because they are very closely related in nature. And, as already mentioned earlier,  they can both be found in North America.

Captive bred snakes are always a better option because a wild snake might be a bit too difficult to handle. Most the time they are stressed out because of the change of their environment that  can pose as a threat to the owner and the pet as well. Again, the wild ones run the chance of contaminating the owner with the parasites that it had housed on its skin for some time. Then, there is an  illegality angle in capturing  a wild snake. Therefore,  captive green snake breeds are the ones you would like to buy anyway.

These snakes prefer to mate sometime during the spring and at times during the fall, and are known to lay around 3-12 eggs at a time. Rotting logs are the preferred locations, where the female snakes like to lay these eggs and the hatchlings would break through these eggs during the fall. They do not vary much in the form from the adults, but the only thing is that, their skin colors are not that vivid. Since these snakes are very small, they would never require very large tanks,  but what they absolutely require is some space on the vertical side because they love to climb. 30-gallon tanks are considered to be the perfect size and a hide with a good amount of greenery is an absolute must. These green snakes do not create a fuss,  and it is because of their calm nature that allows you to  gather more than one snake in a single tank. Make sure that these tanks have well fitted mesh screen as their lids so that the snakes find no way to escape.

In the case there is very little greenery inside the tank, the green snake can really get very stressed which is not good for your pets. Small plants which are not too fine like the silk plant can be kept inside the tank without any hesitation. Plants like the nontoxic ones and the Pothos  or the Ivy are ideal, which will allow them some space for climbing. It is recommended that at least one-third of the total size of the tank must be filled with some form of greenery. Reptile carpets are the best options if you were wondering about the substrate. Even unprinted papers will just do fine as long as you  make sure that these substrates cannot be ingested very easily by your pets.

Although there is a debate about the best temperature gradient in the tank,  you would do well to make sure that it is within 70-80 F (21-27C), even though some suggest a higher temperature, within 77-90 F or (25-32C). During the night time, the temperature can fall, and it can be somewhere within 65-75 F (18-24 C). A ceramic heater or a headlamp can be used for the heating purposes, or you can even consider a heat mat which can be placed under the tank for this purpose.

UVA/UVB bulbs are of absolute importance for the survival of these snakes, and one other thing is a shallow dish containing water. This dish should be able to hold the snake’s entire body, for times when it would feel like soaking itself in some water. Misting the greenery  is an essential task for the owner, because these snakes love to drink water droplets from the tiny leaves on the trees.

Soft bodied arthropods are what these snakes desire the most as their diet that  would also include some butterflies, crickets, grasshoppers, moths and of course spiders. Since these snakes are completely insectivorous by nature, they are among the few snakes that can live on a diet consisting essentially of insects and nothing else. When they are living in the wild, they  prefer food like the grasshopper, caterpillar, fly larvae, crickets, spiders and moths.

You must change the diet  from time to time for such snakes because this will ensure that they get enough important nutrients which are essential for their  survival and healthy living. You can make them eat crickets, grasshopper’s earthworms, moths and spider, while you are trying to pet them. The very tough exoskeleton of the meal worms renders  it very difficult for the snakes to ingest, and that is why,  although you may feed it with these meal worms, make sure they are the molted type. Feeder worms which are soft for the snake’s choice, like the wax worm, also make  a good meal for the snake.

One thing to remember is that you should ensure the quality of the prey by feeding them properly,  or in other words, gut loading them to ensure that your pet snake gets a nutritious diet with enough vitamin and mineral supplements. Some experts suggest  that you would do well to stuff the prey with good quality reptile foods like the turtle dragon, iguana or the bearded dragon diet, which must be combined with other foods like the carrots or the collard greens for the snake’s good health. You may also try dusting these prey with some good calcium supplements, although gut loading is much more effective.

It is always better not to serve your pet snake with any prey that is larger than its girth. Also keep the gut loading food with the insect after you have put them in the snake’s tank, so that they never try to nibble on the snake which is sleeping. A deep container with a wide mouth must be used to keep the insects, so that you get a good idea as to how much was eaten.

For beginners, green snakes are not the best thing to handle as they are very shy in nature and can really be reluctant when it comes to eating. Both the snakes are better for admiration and appreciation from a distance, and  rather not be handled, as they tend to stress out a lot.