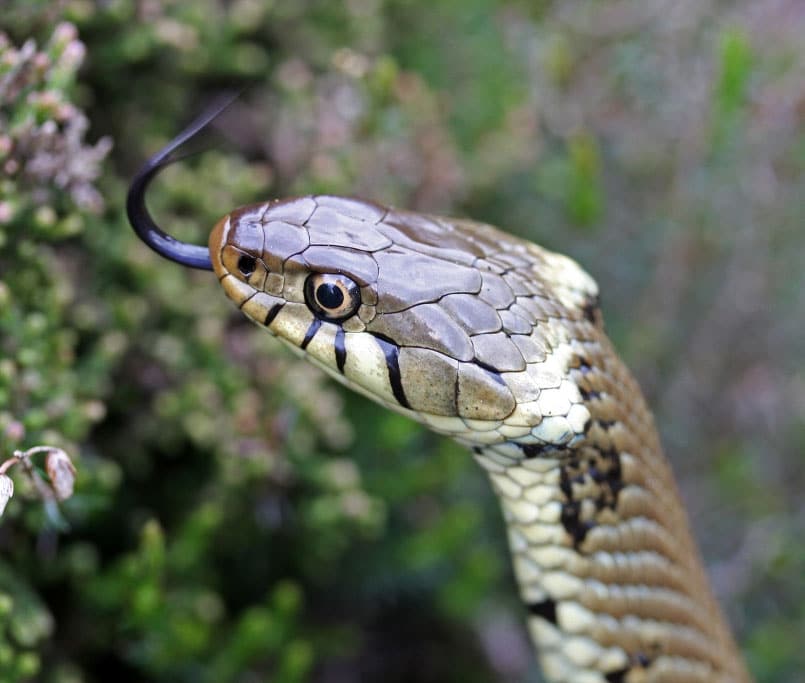 The grass snake (Natrix Natrix), which is  also well known as the  ringed snake,  can be defined as an Eurasian non-venomous snake. Usually they tend to live near water bodies and would feed primarily on the amphibians. They are also commonly known as the water snake. The grass snakes have a very distinct yellow collar behind their head and they usually are dark green or brown. It is because of this appearance of theirs that they are known as the ringed snakes. There might be species whose color might vary from gray to black. The type of water snakes, which are of dark colors are more likely to be found in colder regions,  as this dark color brings thermal benefits to them. The underside, or the portion around their belly, is whitish in color with some black blocks which appear irregularly on their body. This helps one to recognize them. In Great Britain, the grass snakes are considered as the largest reptile, because it may reach a length of 190 centimeters or 6ft 3in in total. The females are usually larger than the males, who might grow up to the length of 90-110 centimeters, which is 2ft 11in -3ft 7in in length. The males are known to be 20in or 50 centimeters shorter than the females and they are even smaller in girth. An average weight of a water snake can be approximately around 240 grams or so. Because of the white stripes near its head, in the Balkans region, the snake is generally known as belouška/bjelouška which is in a Serbian / Croatian language, which means white eared snake.

Since these grass snakes are unable to produce any venom out of their body, they produce a garlic-like-smelling fluid out of their anal glands, or they would completely stop moving and be able to secrete blood (auto-hemorrhage) from their mouth and nose while doing so, tricking their predators into thinking that they are  dead. At times, the snakes  might also become extremely aggressive and start hissing and striking without even opening their mouth. They are rarely known to have bitten someone, in defense. While acting like they are dead, they are even able to regurgitate every content of their stomach.

The water snakes are known to inhabit areas which are close to the ponds, lakes, or slow running rivers, where there is ample availability of frogs and toads for the snakes to feed on. The grass snakes are very good swimmers in attempts to fend for their food and they even try to feed  on fishes or small mammals, which they do not prefer normally.

You are most likely to find the grass snakes among heaps of  dead and rotting plant, under which they would hibernate and lay their eggs. And if the compost heaps are near a pond or places in which water can be found, then the snakes would have a gala time, living near it, because there it will get to eat frogs, toads and newts as well.

The grass snakes are generally nervous and timid in nature; they get reluctant when it comes to their feeding. It’s because of these problems, that these snakes are not good as pets for beginners, as keeping them might prove a hazardous task.

The green colored grass snake will  lay around 40 eggs at a time in spring and would incubate them in their burrows for about 10 to 12 weeks. The little ones which hatch are left to live on their own, but they often become a meal for the predators out there. The water snakes,  being small in size,  do not need very large tanks, but what they absolutely require is a vertical space to climb. 30 gallons is considered as the perfect size, because it not only has enough space to hold the snake,  but it will also provide a good lot of space for them to climb. They are really shy and docile,  and hence, in one 30 gallon tank, you can even put 3 of such snakes and they will live happily. Anyway, this tank must have a well fitted lid, so that it can hold the snakes and never allow them to escape.

The grass snakes are very fond of the greenery around them when they are in the wild, so once they are devoid of such an ambience, they get stressed. Non toxic plants are the better option, but you can fill the tank with silk plants. Make sure that at least one third of the tank is filled with these plants. The branches and the vines will in turn provide them with an option to climb on, they do not cause much hassle when it comes to roaming about in their terrarium. All they need is some greenery and a good space. The hide boxes, as always,  is a must. Reptile carpets are the better options as the substrate, but a simple paper towel will suffice. Those substrates that the snake can easily eat or ingest you must avoid.

Being insectivorous, they have a weird appetite as they love to live on insects entirely and completely. When in wild, they are known to eat almost any kind of insects available to them, even a spider.

In captivity, you must feed your grass snake with crickets as that is the safest option. But then again, you must vary the diet, as the snake requires all sorts of minerals for a healthy lifestyle. You can feed them with items like grasshoppers, spiders, moths, earthworms and the options are varied. Mealworms are not really the best thing to give to your snakes, as their exoskeleton, which is tough might cause impaction, but freshly molted mealworms pose much less threat. You can feed other worms such as feeder worms too.