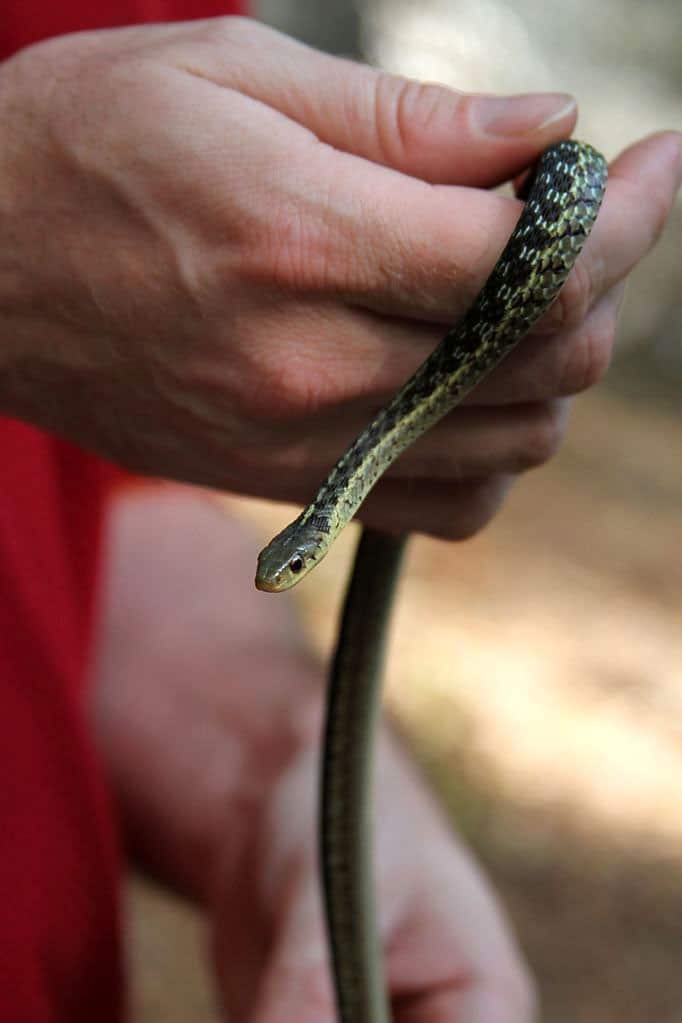 The Garter snake belongs to the Colubrid genus. They are fairly distributed through North America.  You can find them in the  panhandle of Alaska and you can see them in Central America.  Colubrid  snakes are the most extensively distributed reptiles genus in North America,.  The garter snake is quite a celebrity. It is the state reptile of Massachusetts.

Garter snakes exhibit  high variation in color patterns.  There are three light colored stripes running along the length of the body against a background color  of brown, black, olive or gray. The color of the stripes also varies.  They can be yellow, white, green, blue or brown.  There is a central stripe that that runs along the back of the snake. The other two stripes are on either side of  the central one.  In the case of some snakes, the stripes may be poorly defined or even absent.  Some garter snakes have rows of very dark spots that alternate and run alongside the stripes. They look like light checkerboard designs.  The head of the Common Garter Snake is broader than its  neck  The heads are uniformly dark.  They have  red tongues with black tips.  They have keeled scales,  meaning you find raised ridges along the length of the scale.   The throat, chin and  belly conform to the color of the stripes,  which can range from yellow to white., green, blue or brown.

Garter Snakes (the common variety) grow to lengths of 46 to 137 centimeters.  Generally, the males are smaller than the females.  But they have longer tails. Young garter snakes measure 12.5 to 23 centimeters at birth.  They resemble the adults in appearance.  There are dozens of regional, recognized Garter Snake populations with distinctive color patterns.  Common  Garter Snakes resemble their close relatives, the ribbon snakes and Butler’s Garter snakes in appearance,

Garter snakes have very complex systems of Communications involving the use of pheromones.  They can find other snakes by following the pheromone trails made by them. The skin pheromones produced by the males and the females are very different,  and one can distinguish them immediately.  The surprising fact is that male garters can often produce female hormones in addition to their own male hormones.  This ability fools other males in the mating season who think they are females,  and promptly  attempt to mate with them.  This is no freak of nature.  This blunder on the part of the other males allows the transfer of heat to the trickster through Kleptothermy (Heat steals).  In other words,   Kleptothermy is a form of thermo-regulation seen in reptiles and birds (as well as some mammals).  When birds or animals huddle together for warmth, it is kleptothermy of the voluntary kind.  The kleptothermy used to garner heat by the garter snake male is certainly  certainly involuntary. This is more beneficial immediately after hibernation,  when they simply need heat to become active. Male snakes that produce both male and female hormones have been noticed to be sexually more active when females enter the melee for mating.

A Garter snake, when threatened, may coil its body and strike. The typical behavior is to flail (swish) its tail and hide the head. It also discharges a bad smelling, musky secretion from a cloacal gland, to discourage predators. Garter snakes use these and other techniques to escape from the predators. If a predator on land chases them, they will just get into the water quietly. The main predators of the species are Hawks And Crows Among The Birds, crayfish, Raccoons, other snakes like the king snake and the coral snakes, shrews and believe it or not, frogs which eat the juveniles!

Garter snakes are distributed all through North America. Common garter snakes are the only species of snake that you can find in Alaska. They are possibly one of the most northern species in the world, with the probable exception of Crossed VipersThe reasons for the wide distribution of this genus is that these species are not very discriminating as far as diet is concerned. The second reason is their very high adaptability to different land-forms and biomes with varying closeness to water bodies. The garter snakes that we come across in western parts belonging to North America are certainly more aquatic than the ones in the eastern parts. Even in the matter of hibernation, we can notice the divergence. They hibernate in very large groups in the northern parts, while the groups are much smaller in southern populations. Snakes are fascinating reptiles and can become really tame with careful handling. It does not mean that snakes are the proper pets for everyone. Snakes are unique creatures with unique requirements. If you possess the commitment to understand their needs, you will make an ideal keeper of pet snakes. There are a few things to consider before you decide on keeping snakes.

Understand that you are about to make a long term commitment. Most snakes have fairly long life spans and may live up to twenty years.
You must be ready and willing to provide prey animals for their food. Pre-killed, frozen pray would be less messy and altogether a better idea. You may well have to make room in your freezer for frozen rodents and the like.
Snakes are very good at escaping. Give them a little gap and they will slither out.
Keeping large snakes that constrict and venomous ones would not be a very good idea.

How to Choose Your Snake

Suppose you decide to keep a garter snake as a pet, try to get one bred in captivity from a well-known snake breeder. Wild caught garters are more prone to stress and disease as well as parasites. They are rather tough to tame.
You can ask for feeding demonstrations. This will ensure that your pet will eat frozen, pre-killed creatures and that there is nothing wrong with its appetite.

Garter Snakes start mating in spring as soon as they come out of hibernation. The males are the first to leave the dens and lie in wait for the females, and promptly surround them when they come out. . The males release the pheromones which make them irresistible to the females. After choosing her mate and mating, the female goes back to her summer habitat to look for food and the right birth place. The males linger on in the hope of finding new mates. The females possess the ability to store the male sperm until it is needed. The females are very choosy and will not mate if she does not find the right mate.

Female Garter Snakes are not egg layers. They will nurture the young ones inside their bodies till birth. The newborns spend only a very brief period (a few hours or a couple of days) with the mother. The mother does not give them any parental protection after birth.

A vivarium made of wood can suit your Garter snake pet rather than glass tanks or plastic ones.. Wooden vivariums are better insulated so that heating can be properly arranged. Escapes are unlikely unless you leave the door open. These vivariums allow more privacy since they have a single glass only in front.

You would do well to provide a 24” vivarium for a hatchling. When your pet reaches one year of age, you can go for a 36” vivarium

If you put very young snakes into a large vivarium, they tend to become stressed and refuse to eat food,. Garter snakes are basically very active. Once they settle, they would relish large vivariums.

Remember to give fresh water to your snake every day. The water bowl must be big enough to allow the snake to submerge itself in the water. If the bowl is big enough, some snakes would readily swim. If you use very big bowls, make sure that you have adequate ventilation in the vivarium. Otherwise, your pet could develop respiratory and skin problems.

Like all snakes, Garter snakes are carnivores. They will eat almost any creature they can overpower. The list can be quite exhaustive. Ants, amphibians, crickets, earthworms, frog eggs, lizards, leeches, minnows, rodents, toads and slugs. They will eat aquatic creatures if they happen to live near water. The ribbon snake has a particular liking for frogs and tadpoles in spite of their potent chemical defense systems. They swallow food whole. Garter snakes being highly adaptable, take whatever food wherever they find it. As a rule, they eat animals live. Occasionally, they may consume eggs.

The garter snakes diet in the wild has a lot of variety. They include amphibians, small rodents, fish and earthworms. In captivity, you can offer them frozen whole fish and small mice. Remember to supplement their diet with vitamin powder, since freezing could destroy thiamin.

You can feed your snake every week. Make sure that the prey is no bigger than the snake’s largest part.

Snakes do not use energy to keep the body warm like mammals do. Naturally, they require only a little energy to properly function.
You must not feed very large prey or feed them frequently’ The result will be that the snake will grow fast. The head will not grow at the same rate. Obesity can be a severe problem even for snakes! If you overfeed the snakes, they will become indolent and this could be very bad for their health.
Snakes may not feed when they are molting or shedding.

Most garter snakes, especially captive-bred ones, are docile and they are not averse to handling. Just pick them up gently and let them explore your hands.