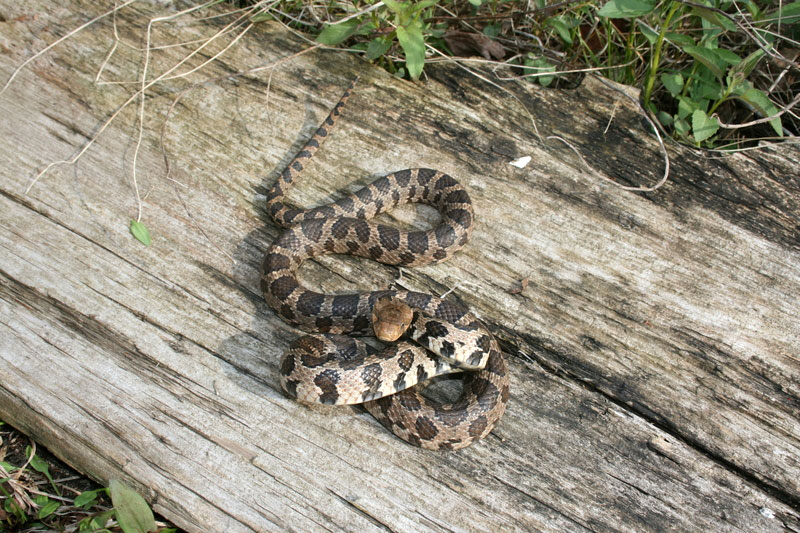 Two different species of the North American Rat snakes are also very commonly known as the Fox snake or the Foxsnake. These snakes are non-venomous in nature, although many easily confuse them with the venomous kind of the Massasauga Rattlesnake, which are known as the Sistrurus Catenatus. Both the Massasauga rattlesnake and the fox snakes,  to some extent,  are known to share the same geographical range, and it is because of this, that the Fox snakes are being harmed.

The Fox Snakes are known to grow to about 3 to5 feet in length. They are usually yellowish or light brown color with  dark brown,  and even at times,  black blotches running along its backside. The color of the head may vary from being reddish or orange, and their underside or the belly portion has a  yellowish color with a hint of checkered black. Not more than around two species of the commonly known Fox snakes are known to inhabit the Michigan area, but neither species have been known to cross paths, or,  in simpler terms, neither of these species’ geographical range is known to overlap. In an attempt to scare off their predators, the fox snake would mimic the actions of a rattlesnake,  vibrating  their tails as well. But all these attempts were soon in vain, as humans started to hunt for the rattlesnakes, and with them,  the fox snakes too fell prey to the pangs of human wrath. In all honesty, the Fox snakes are very docile creatures and they are absolutely non-venomous in nature. They are terrestrial animals and would be active both in the daytime, as well as after nightfall;  in short, they are diurnal creatures. They primarily feed on rodents, but in case they face impending harm or feel  threatened in some way, they might bite. These bites feel nothing more than just a silly puncture by a needle and they never affect you much or cause much damage.

The fox snakes have a tendency for stalking and most  people would recognize them because of the reddish color that few of their heads have. Some of the members who belong to the rat snake family are known to have stripes, blotches or even the combination of the two patterns, while there are some species that are known to be mostly uni-colored.

Pantherophis Glyoydi or the eastern fox snake are a species that  most of us other than those who have crossed paths with them are not well aware of,. They inhabit a very small area in  Ohio,  Ontario and Michigan,  where you can find them only near Lake Huron and Erie.

You can find the western fox snake or Pantherophis Vulpinus can in places like the western Michigan, Iowa, Minnesota, Wisconsin, Illinois and South Dakota. These species,  mostly love to live in open forests, farmlands and the prairies.

The Elaphe vulpina are the  species that  are more comfortable to live in old fields, dune areas and even the woods, but on the other hand,  the Elaphe Gloydi prefers to live along the marshes,  or any place that are usually marshy in nature, like a wet meadow.

Late April and even sometimes during early May is the time when the Foxsnakes would mate and they produce eggs that are yellowish in color. The number of eggs varies in the range of 8 to 27 which they will incubate until late August, after which they would hatch. The hatchlings are relatively larger than few snakes and are mostly 1 ft in length. For the tiny little hatchlings, all you would require is a faunarium  (an all-purpose plastic terrarium for reptiles), which you should equip with a heat mat that you can spread across at least throughout half of the area. Further, you must provide two hides of varying temperature. A water bowl that is big enough to hold the entire body of the snake is essential to facilitate the snake’s desire to soak in the water. The rest of the decoration is up to you, some twig here and a branch there will allow the snake to move about and climb a little height as well. The substrates can be plain kitchen papers.

The Corn Snake and the Fox Snake have similar taste with regard to their living arrangements. You can provide both the corn snakes and the fox snakes with the same sort of a care as their needs are quite similar. The adults require a much larger area and 36x18x18 inch tub is ideal The  vivarium must have a constant supply of heat,  either from a  light emitting bulb or a heat mat or you can even install a ceramic bulb which you must arrange to protect from burning your pet snake.. The temperatures must be controlled as it is desirable to keep one side of the vivarium set under a temperature of around 21 degree C,  which has to the cooler side of the area, while the hotter part must be somewhere around 28 degree C. Aspen is the best option for a substrate or anything which matches the features of the aspen that does  not absorb water will just do fine

They are really non-venomous by nature and do not pose much threat to the humans. They are not difficult to feed. They can thrive on the rodents or the birds and even frogs are good for them. When they live in the wild, they will eat small mammals and even birds,  but in captivity,  they would readily accept mice, chicks, gerbils, rats and the like. You need not feed these snakes. Just keep the food on the floor and let the snake find its way to its meal. Juveniles would need a gap of around 4 or 5 days between feedings, while the adults will  feed after every 7-8 days. You might also need tongs for some, because they require strike feeding.

It is simply because of their fear that the juveniles seem to bite more often than their adults. Give some time for them  to feel comfortable in its new surroundings and make sure that you do not agitate them or cause them any harm. Once they get to know you, the snake’s behavior will change drastically for the better.