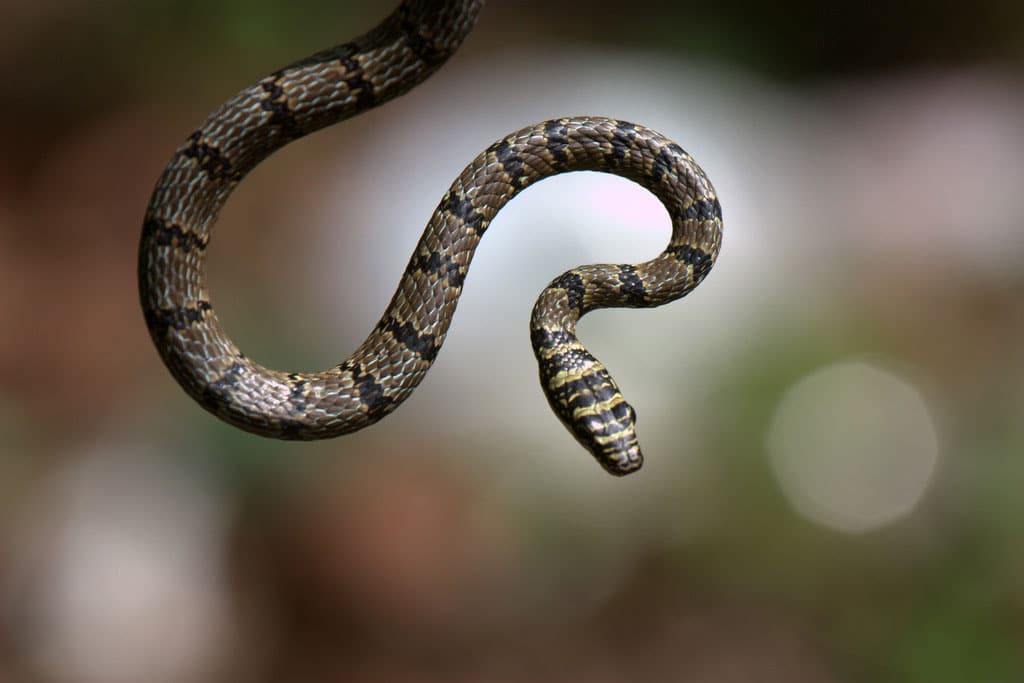 Flying snake,  commonly called  Chrysopelea,  is  from  the Colubridae family. They have only mild venom that works on small prey.

The Flying snakes represent a small group which belongs to the species of the tree snakes that lives in South and Southeast Asia. They are remarkable to look at when they are at rest or are slithering, but they have the unimaginable ability to jump from one tree to another or to the ground by flattening their body This action gives  their movement an impression of flying.

The flying snakes climb the trees by using the ridge scales that they have along their belly,  to  push against the rough barks of the tree on the trunk. This allows them upward vertical movement,  and when they reach the tree branch’s end,  this snake will still keep moving till its tail is dangling from the branch’s  end. Finally,  it will make a J-like shape with its body and lean forward in an attempt to adjust the inclination, according to its wishes. This helps them to control the path through which they intends to fly and also allows it to choose the area that it wishes to land on. Once it has fixed its destination, it will  propel itself by rearing up, and launching its body towards its destination or the forest floor.

The flying snake sucks in the abdomen and flares out the ribs to give its body the appearance of having  pseudo concave wings. The continuous, parallel lateral undulation helps it to realign its path midair to help it descend and land safely on the appointed spot.

Sucking in the abdomen and making its motion of lateral undulation while in mid air,  helps this incredible gliding snake in its process of gliding midair. This way, it gets to conserve a lot of its energy and even avoids any risk of having to face an unwanted predator, of which there is a risk in the lands.

You have five types of species till now and they are listed as follows: They say that the last one mentioned has the least size among the species of flying snakes, which reaches a length of two feet. The base color is dark gray or black, and thin yellow and thick red lined  colors with very evident black bands, cover the body.

Some of the less significant species include the Chrysopelea Rhodopleuron (the Moluccan flying snake)  and Chrysopelea Taprobanica (the Sri Lankan Flying Snake), .

The Flying snakes usually display a very nervous nature and they have the ability of flight.

The flying snakes are known to share quite a lot of their habitats with the humans. Their existence can be found all along Southeast Asia(the  mainland), Vietnam, Cambodia,  Laos, Greater and Lesser Sundas, Maluku, and the  Philippines, southernmost >China, India, and  Sri Lanka.

They are really not suitable for an amateur who would want to pet a snake. Not only do they demand a lot of attention, but not much is known about them. Even very few can be found in their captive-bred situation. The wild ones many certainly contain parasites, so they are a lot of hard-work.

Very little information has been gathered up until now. All that is known is that they lay 6-11 eggs and the hatchlings are usually 15-20cms long. They resemble the adults in their body pattern,  but are much brighter in appearance.. An arboreal cage is an essential when you are trying to keep these species as pets.  They must  have ample space for climbing and doing all those things that they are able to in their natural habitat.

It is recommended that you provide a good size of a cage which will let it climb to a certain height. Additional plant foliages are also to be provided and an example of the ideal size of the cage is 1.5 ft deep, 2.5 ft wide, and 4 ft tall.

Basking lights, like the mercury vapor is a must,  as these snakes love to bask up at an altitude. Heat pads, which are also essential, will help them when they are down on the ground. You must leave the heat pads on all the time,  but you should keep the basking light on for maximum 13-14 hours a day.

A water dish which will hold its entire body is important as well. Use a bowl that is  4.5 inches in diameter  and  2 inches deep, but make sure that the bowl is not too large. They love to immerse themselves because this adds to their humidity.

First,  it is important that you do a good research before you go ahead and feed your snake, but you  can safely assume that they feed on lizards, rodents, birds, bats and so on. You can certainly feed the females with 10 days old mice.The males refuse to eat mice. For them, lizard skin is an absolute necessity.

Do not agitate these snakes. Other than that, make sure you have done ample research work before you try to attempt anything new.