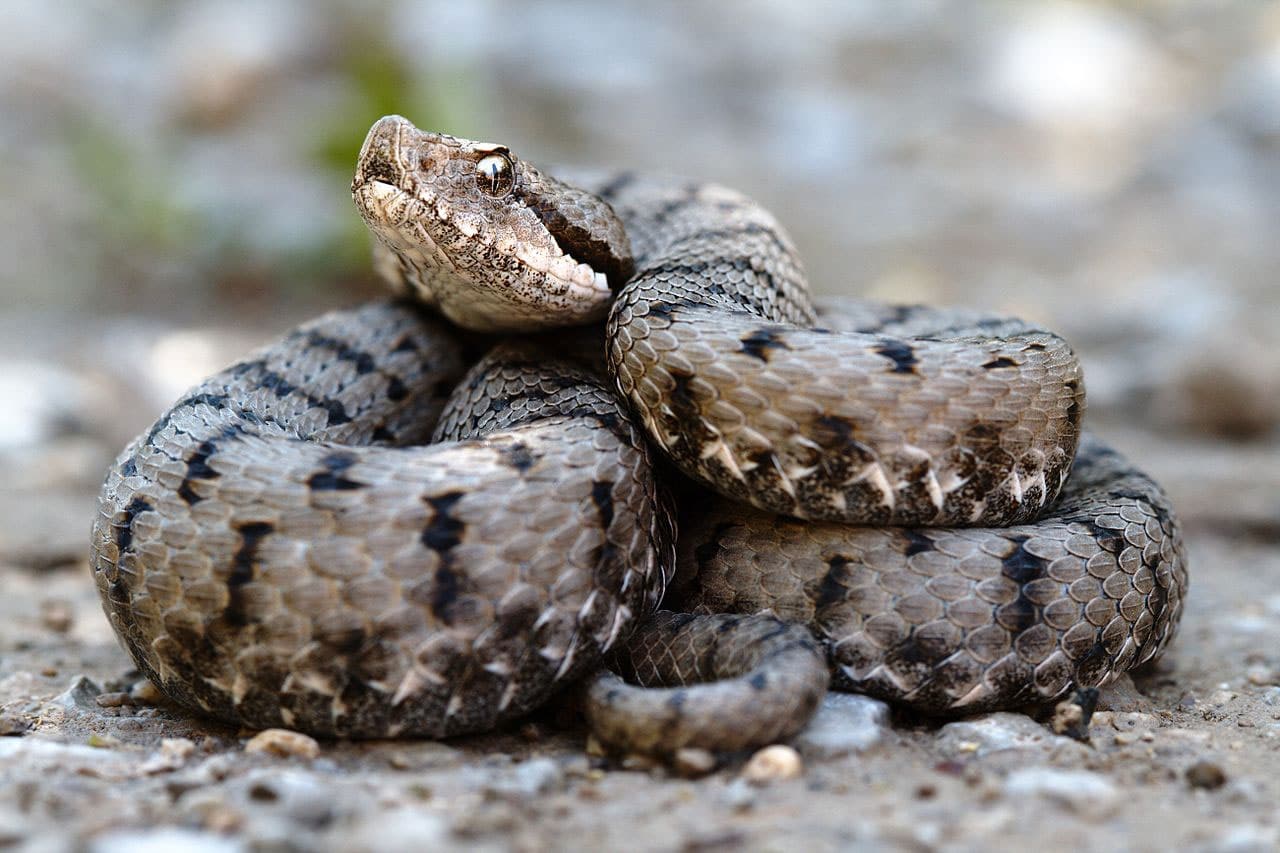 Herpetologists and snake enthusiasts do not look up to Europe as an ultimate destination for any worthwhile study of the poisonous varieties of snakes over there as there are not only fewer options, but also a relatively small population of the dangerous ones when you compare the statistics the world over. Of course, in the UK, you can see a limited variety of venomous snakes while Ireland is totally bereft of them.

Nevertheless, Europe has its fair share of these reptile species. Most of them are from the diverse and big groups of Colubrids including the  non-poisonous or of the mildly-poisonous variety, but of course not dangerous to human beings. The only real poisonous snakes of Europe are from the family of vipers that are quite different from their American relatives. Here all the vipers are True Vipers of the family Viperidae, as opposed to the pit vipers of the new world like in the US.

The method in which Vipers inject venom is complicated. They have big tube-like fangs, hinged at the frontal portion of the mouth that they can  fold when unused. It is believed that their bites are very painful and deeply inflicted. The designs and color of the Ursin Vipers are similar to that of the Long-nosed Adder and the Common Adder. This tiny snake grows to a length 45 -90 cm (18 – 36 in). It is bad tempered. If you go near it, you can be certain that it will  strike you immediately. The haemotoxic poison that it possesses,  is very strong and leads to death of human beings, even though only infrequently.

The habitat of this Viper is farthest Southern west Europe – Portugal, France and Spain as also the North West of the African Continent in  Algeria, the Mediterranean provinces of Morocco and Tunisia.

The total length of the snake is approximately 72 Centimeters or 29 Inches, though you  normally find them in shorter lengths.

This Lataste’s Viper comes under the classification of Near Threatened in the  IUCN’s Red List of endangered varieties (2001). There is a decline in this particular variety on account of their systematic habitat loss and massacre. The population of this variety is surely on the decline,  particularly in Tunisia, where  this variety may even have ceased to exist. The Aspic Vipers derive from the Greek word Aspis which means Viper, is native to the  Southern west regions of Europe: Andorra, Northern east parts of Spain, covering a big area of France- inclusive of the Oleron Islands – Sicily, Monaco, in Elba Islands of Italy, San Marino as well as Monte Cristo,  North West regions of Slovenia, the  farthest southwestern  provinces of Germany – Southern parts of Black Forest and Switzerland.

In the year 2006, many of these were identified in forest regions of Southern Rotterdam in the Netherlands. As the Asp Viper does not originally belong there,  it is supposed that a few were relocated there and  let free.

The Asp Vipers favor locations with sunlight, shaded with plants and with reasonably dry soil. In France and Italy, you can  find them in lower down the mountain areas or hilly places, preferably in regions of limestone. Sometimes, you can find them in the lower plains as well.. You  also see them in the mountain meadows, scrub-lands, forest clearings, glades, in the edges of forests, adjacent to streams, chestnut / oak, in mesic,  and perhaps in stone quarries and where rubbish is dumped. In spite of the fact that these snakes do not normally inhabit the mountainous terrains, some have been seen  in the mountains of the Pyrenees at heights about of 2100 meters (6500 ft).

This viper measures 60 – 65 cm in length, but has a  short tail. Its head is triangular in shape and snout inverted. The markings on the dorsal side show a wide variation, even though the  zigzag design, is not distinct as in Common Adder.

These snakes deliver  more painful bites than the Common Adder. Besides being painful, it can be fatal in about 4% of the cases if you do not administer the anti-venom promptly.  Statisticians in France take this snake as the most deadly snake in all of France, and go on to estimate that  90% of the snake bites occurring in Italy are attributable to these snakes.

The symptoms, post-injection of  venom  includes severe pain, discoloration and  edema. In certain cases,  after some time,  acute hemorrhagic necrosis can set in.   The resulting degradation of the blood vessels and of the blood circulation to the eyes, it affects the vision horribly. The poison can affect in both  anticoagulant as well as a coagulant manner,  and in some cases lead to a  Glomerulus condition of entwined fibers or blood vessels.  Death is  also a possibility resulting from the failure of the renal system.    The affected patient builds up neurotoxic  symptoms that lead to swallowing and breathing problems and can even lead to limb paralysis of the bitten part.

At present five subordinate varieties have been recognized: The tiny viper measuring 45 – 60 cm (18 – 27 in) is widespread all over Europe. In the United Kingdom, this is the only venomous snake. The habitats where they are seen are diverse, from rocky gradients to grassy lands, on farms and in cultivated areas..

The usual Adder variations in their color: The color of the males varies from steel gray to dull brown. The females have brilliant colors varying from yellowish to brown and  perhaps brick red. A few of them are totally black, but the majority of them have dashing dark colors with designs of zigzag stripes all through the body length above an oval shaped line of spots. The common adder’s head has V or X black marks.

The Common Adder is known for its irritating temperament when you handle or trouble it; there are chances of it biting you. The venom of this snake is haemotoxic, it destroys the cells of the blood and causes damage of the tissues. Most of the bites are imposed on hikers, campers and workers in the field. This Nose-horned Vipers are found in the south east regions of Europe, Australia and Hungary right up to Italy, formerly Yugoslavia, Romania and north of Albania

This tiny viper measuring 45-90 cm (18-36 in) is normally seen in the various habitats of open fields, farm lands and irrigation lands further to rocky elevations.

On the point of the snout the tiny scales juts out, by which it is named nose-horned or long-nosed. In addition, this reddish to gray viper has a clear black or deep brown zig zag design throughout its back.

This Adder snake whose snout is long is the cause of several bites that is deadly, despite of the fact that you may survive with medication. This haemotoxic venom leads to acute pain and severe damage of the tissues.

The  yellowish or gray snake is the American copperhead’s  counterpart, with  which it has great similarity. The Pallas Viper inhabits the whole of South East Europe. We see them in the open fields, farms and elevated slopes.

This snake is a timid one and hardly strikes. Its haemotoxic poison is not often deadly to human beings. We find this poisonous variety of vipers in the farthest regions of South West France and also the Northern provinces of Portugal and Spain (in the  Galicia mountains, the Basque country and in Cantabrici)The Seoane’s Viper is generally not longer 30 in or 75 cm.   You can discern a lot  of variance  in their color. The design on their back is properly formed with brown zig zag designs in brown to pale gray or ground hue.

You can see fragmented  or twin-striped designs on the back or sometimes, none at all.

This Ottoman Viper exclusively inhabits the Northeastern parts of Europe, Greece, Turkey and also certain regions of the Sea islands of the Aegean (Leros, Simi, Lipsos, Kos, Patmos, Kalimnos, Samos, Lesbos and Chios). It is assumed they have a rich population.

The coloration of this snake is pale, it ranges from white to gray with zigzag designs, black in color all through its back. This viper is comparatively a big one of length 70 – 95 cm (28 – 38 in). In certain of Greece they attain a length of 130 cm (52 in). This poisonous viper is widespread over the central regions of Ukraine.

The Adults have stout bodies, and they are short, with a length of only about to 68 cm (27 in). These Greek Vipers are endemic only to the following Greek Islands of the Aegean Sea in  the Cyclades Archipelago: Kimolos, Sifnos, Milos and Polyaigos