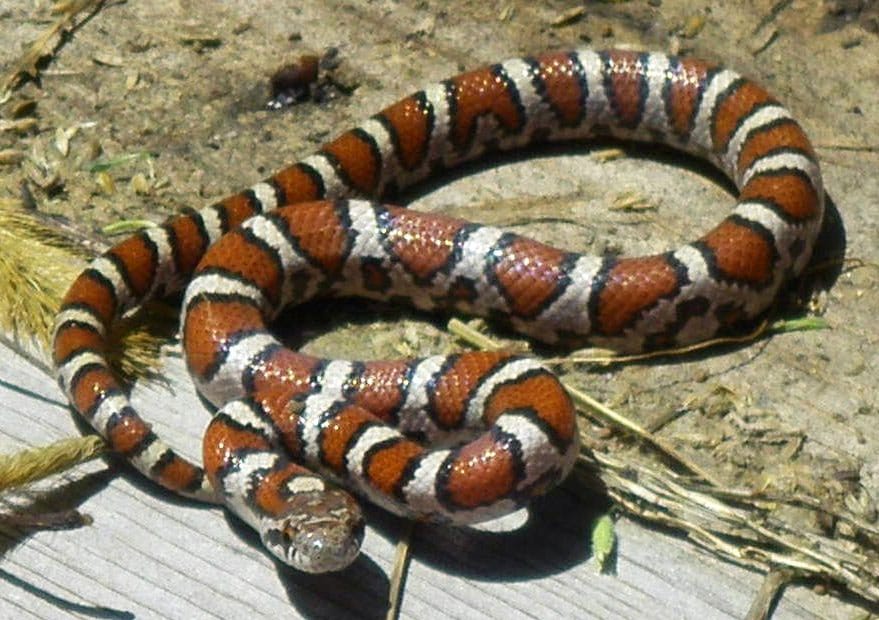 The Eastern Milk Snake, a biologically termed as Lampropeltis Triangulum Triangulum,  is a slim non venomous snake with smooth scales. Its body has a background color of tan or gray, on which there are patches of brown or red. On the rear of its head we find pale V of Y shape marks. The snake’s belly has a design of the checker board; the length of an adult is 2 – 4 ft.

The Eastern Milk Snake is different from its like, which has a triangle shape head. It adds beauty to the ecosystem of the garden. Do not get confused  by the legend that gives way the name milk snake – this slim snake never feed on milk, neither does it draw out milk from any kind of animals. Its only task in a diary farm is to dine on a rich diet of rodents.

When the eastern milk snakes are in hiding, these 2 to 4 ft animals are not scared of people and often make burrows adjacent to the foundations of buildings that are outside,  where rats, mice and voles flourish. We find these Eastern Milk Snakes in different habitats, such as farmlands, rocky hillsides, fields and woodlands. In addition, we see them in barns or pretty old basements with foundations made of stones. Their  hideouts are logs, boards, stones or piles of trash.

The habitat of the Eastern Milk Snake biologically extends from the Rockies of the Eastern regions of the United States and also Mexico, Central regions of America and Canada. In the winter, they assemble together to hibernate. When they gather together,  the temperature is regulated. When they are in solitude their physique does not provide this warmth.

The adult Eastern Milk Snakes separate after mating when the climate gets warmer. By the time the summer season sets in and the spring is over, the female snakes lay eggs in clutches of  6 – 20 in the damp and warm nests. The babies hatch between 28 – 30 days and their mothers separate from them.

In the month of June they lay 6 – 20 eggs. The brilliantly colored  babies’ are hatched by the end of summer.

Ensure that the enclosure is very safe as it is crucially imperative, since these reptiles are well known for gauging their cages and fleeing away through the minutest gaps. Any type of cage needs a safe, locked top, Even though it is costly to set an enclosure similar to this, it is worth having one. Even through gaps where it seems not possible to escape, the snakes succeed in doing so. Set tubing of plastic (similar to the airline tubing of aquarium) linking the brim of the cage and the cover  to protect them from escaping.

An enclosure with 10 or 15 gallon capacity, with a screened lid through which it is unable to escape, with natural light entering through the window indirectly is fine. Use substrate (so as to allow them to dig) like wood chips (not cedar), aspen beddings, sand, smooth and small sized gravel, shavings of pine, with perhaps half the area covered with dried moss.  Provide spots to hide at either end, with variation in temperature, for which, sheets of folded paper are a good option.

A good number of materials are possible for use as substrates. For fresh snakes butcher paper or paper towels are good, for cleaning, monitoring the feces and making certain that the snakes are safe from fleas. The different types of substrates for use are reptile bark, aspen shavings, or mulch (do not use redwood, pine or cedar). When the wood shavings are used as substrate; ensure that the snakes do not ingest them as  food. Outdoor-indoor carpeting (e.g.Astro Turf) is also a good substrate. Whichever type of substrate you use, the most important criteria is to maintain cleanliness, therefore select a kind of substrate that is easily cleanable whenever essential. Often,  feed each hatchling separately (after its initial shedding), with mice (adult, fuzzy or pinky prey depends on the size of the hatchling). For the adults: offer the mail food once a week. (They are not likely to consume during the season of mating.

For females: feed them twice every week, especially those that breed, but with tinier food items. Certain pregnant snakes do not consume, however, feed them regularly, and cease to feed them just prior to brumating. A  few of them are likely to have trouble when you feed them.

When you handle them gently they stay cool, otherwise they are a bit restless.