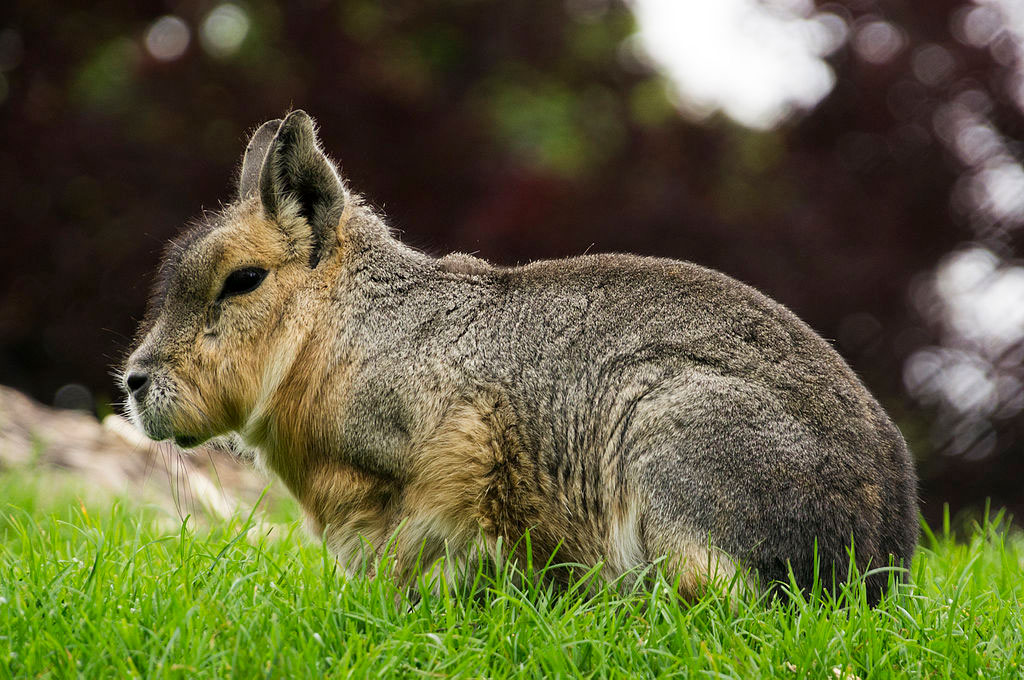 Mara Dolichotis patagonum, is comparatively a huge rodent of the Mara genus (dolichotis) which they otherwise call Patagonian Cavy, dillaby or Patagonian.

The Patagonian Mara, looks like The Patagonian a jack rabbit. Its long limbs and long ears characterize this breed. Its forelimbs are shorter than and not as muscular as its hind limbs which have a longer radius longer than humerous(the long bone in the forelimb). The feet have hoof-like looks. The hind feet have 3 digits, whereas the fore feet has 4 digits. Its tail is nearly hairless, depressed and short. Its dorsal pelage is gray with patches of white on the rump, with a black part separating it from the dorsal fur. Besides, the underside is white with a about orange flank and chin. The head along with body, measures to 60-75 cm (27 – 30 in). The tail is 4 – 5 (1.6 – 2.0 in). The weight of the Mara is 8-16 kg (18 – 35).

They are monogamous; as such the Mara stays in pairs lifelong. They substitute partners only when one of them dies. The male goes after the female, having the full responsibility of maintaining the pair. We see the Patagonian Mara travelling in mated pairs, they are life partners.

We see these herbivorous animals resembling rabbits in the semi-open and open areas of Argentina, and in the vast areas of Patagonia. We see the Patagonian Mara only in Argentina. The habitats preferred by the Maras are plenty of shrubs as shelter; despite this they occupy barren and over-grazed soil in the Monte Desert biome. In the North-west regions of Argentina we see the Mara occupying the primary low-lying lands such as creosote bush, habitats resembling forests or Larrea. Mara also favors low shrub regions in Valdes Peninsula and sandy areas. It adapts to the cursorial pattern of life in the Steppes and open plains, with its reduced clavicle, long legs and properly developed sensory organs, which help them to run and communicate in these open habitats. When you compare certain more exotic, uncommon pets, the Maras are quite comfortable to keep.

In a year they litter four times with two young ones in a litter. The breeding of Cavy pairs is 2 to 3 times a year, with 1 to 3 young ones in a litter after a gestation period of three months. The young ones seem developed at birth. They give birth outside a burrow and move quickly into a communal den; this den is forms part of an existing tunnel or hole that another animal had abandoned.

Once they grow fully, they adapt to life outdoors provided they have access to shady places in the heat and heated shelter in the cold. Mara adjusts to cool weather. Once they fully adapt to the climate and surroundings and when they get a shelter free of draft, you can keep the grown-up Maras safe outdoors up to a -10 Celsius temperature.

The favorite diet of Patagonian maras consists of herbs and grasses; if grass is not available they eat other vegetables. The Maras are easy to feed and are not expensive. Their major diet part consists of grass/Timothy, hay and mare ration. Also feed them with rabbit pellets, provided you can feed them a small quantity of fresh fruits on a partially regular basis. If not, dust the food with some ascorbic acid.

Cavies given birth in captivity become human friendly. If they have not mingled with humans, they turn nocturnal to stay away from human interaction.