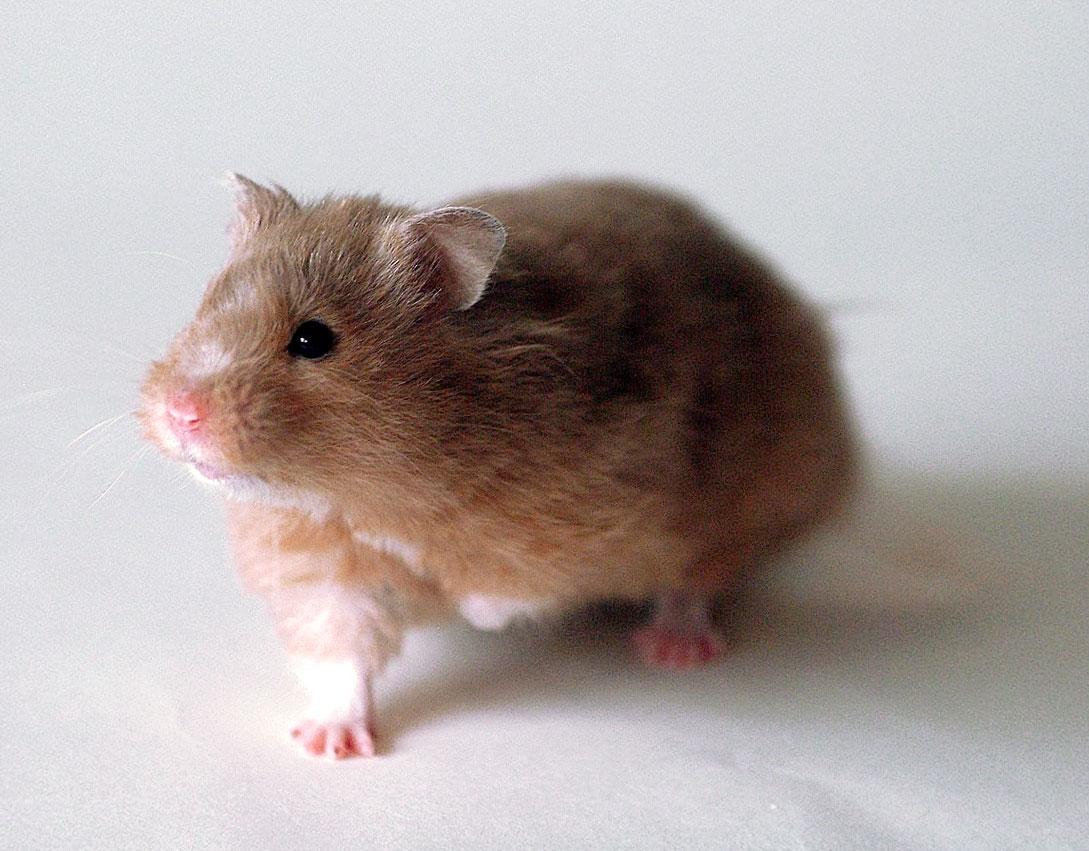 Hamster Mesocericetus auraturs or the Golden Hamster or Syrian Hamster, , belongs to the subfamily of the rodent Cricetinae. They are at risk in the wild; their numbers are reducing on account of intentional devastation as well as farming of their habitat by human beings.

The length of an adult animal varies from 5 to 7 in (13 to 18 cm), they live up to 2 or 3 years. Similar to most of the subfamily, the golden hamsters have cheeks with pouches that expand till their shoulders. These hamsters are larder hoarders in the wild; they use their cheek pouches to transport food to their burrows. The innate color of the Syrian hamster is golden brown (technically agouti) which means that bands of lighter and darker colors shade the hair, with a lighter shade on the belly. Their cheeks have dark marks that run from the ear to the jaws. Since hobbyists breed them selectively, you can find many differences in the pattern and color.

Golden hamsters are highly defensive and never tolerate one another. Everywhere, they assault one another. Even the siblings attack each other on attaining maturity. When they are in captivity the young ones are kept away from their mothers and separated gender wise for four weeks, since they get sexually mature when they attain the age of 4 to 5 weeks.

The original habitat of the golden hamsters was Syria. In 1839 the British Zoologist George Robert Waterhouse discovered them. Their natural atmosphere is a hot and dry desert climate. Hamsters prefer solitude and meet only to mate. In the wild, the gray and common male hamster goes visiting the female hamster burrows in order to mate, after which, the females evict them from their burrows. When they are in captivity, separate the golden hamsters following mating failing which the female is likely to kill the male. The common hamster undergoes a gestation period of 19 to 20 days and it is 15 days for a golden hamster. In the burrows the hamsters give birth to 4 to 12 blind and naked young ones in a nested chamber. When they are two weeks old, we find their eyes open and they have a thick coating of fur. Weaning of the young hamsters take place fast, within 3 to 4 weeks and they gradually separate from their mother. A mother hamster is too motherly and if threatened with danger she carries her litter away either by laying them across the toothless area of her jaws or by stuffing them into her cheek pouches. The female hamster is likely to have 2 to 3 litters in a year.

House them in a big cage – the bigger the better. Syrian hamsters are territorial and solitary; always house them individually. A nest box in the cage is essential; this they use as a pantry or as a ‘bedroom’. We recommend a habitat of minimum 2 sq. Ft. Floor area for a Syrian hamster; you can divide into 2 floors, but just a few inches apart (to prevent them from dangerous falls). Syrian hamsters love hiding spots in a transparent terrarium. They also enjoy a firm and steady floor exercise wheel.

Provide the Syrian hamsters with fresh store grains of high quality mixed with seeds added with small amounts of hamster-safe fresh vegetables and fruits. Remove them immediately if not eaten. Occasionally feed them with small amounts of cooked boneless unseasoned chicken or fish. Always give them fresh water.

The strongest sense of a Syrian hamster is smell; their respiratory system is very delicate. Keeping their environment clean needs special attention. Before handling them, always wash your hands.