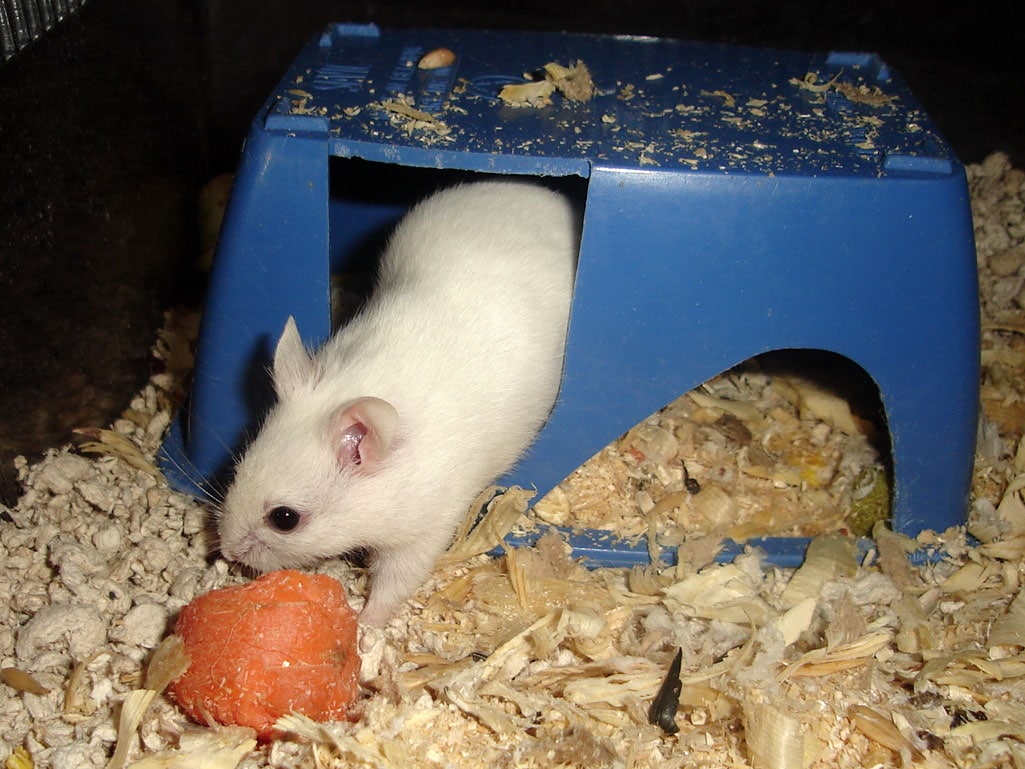 The Chinese Hamster Cricetulus is a charming being; and just like a harvest mouse, its habits appeal to the fingers of those who handle it,. It is a magnificent pet, very intelligent and has a very good personality.

The body of a Chinese hamster appears ‘thin and long’ when compared to the other hamsters. The tail is comparatively long (for a hamster). A tiny slim hamster attaining the size of an adult is almost 4 inches (10cm) long, and hence tiny enough to force themselves through the bars of most hamster cages. As a result, an aquarium is a more secure housing for them.

In the wild, their color is brown with a black stripe running down the spine, with gray and black ticks and its belly is whitish in color. This tinge along with their supple build and lengthier tail gives them a ‘mouse’ appearance.

The Chinese hamsters behave in an unpredictable manner among themselves. The females are extremely defensive; yet you can keep them as a lone animal or you can keep them either as a breeding pair or single sex or in groups of single sex. Some breeders rear them in the colonies.

In case you house these hamsters in groups or pairs the owner must keep a watchful eye throughout on any signs of violence. Frequently we hear them bickering among groups or pairs on such trivial matters as a seed of a sunflower or even on a little space sharing.

Normally they are good-natured, quiet and hardly nip. Handling them becomes a real confrontation on account of their rapid movement and tiny size, particularly for kids.

The Chinese hamster (Cricetulus griseus), is a variety of hamster, initially hailing from the deserts of Mongolia and Northern China. When the Chinese hamster becomes 5 years old weeks, they gain sexual maturity. It is a bit difficult to breed these Chinese hamsters. Grown up females may turn violent to the males, resulting in afflicting grave wounds.

A glass terrarium with tight-fitting cover fabricated with mesh and wood is the ideal housing for a Chinese hamster. Use a terrarium of size 24” x 12” x 12”, with a good quantity of substrate (which is not spread throughout the floor) with a space for them to burrow. (For singles or pups) a 18 “ x 10” x 10” is fine and you can house 8 males in a terrarium of size 48” x 15” x 12”.

The diet of the Chinese hamster in the wild consists of shoots, grasses and seeds; in addition they have some insects. It is possible to use the same combination for those in captivity, along with a sufficient hamster mix of either some crickets or meal worms or some baked chicken or fresh vegetables. Elderly hamsters, nursing mothers, expecting mothers and pups enjoy and benefit from milk porridge.

Once domesticated, it is a pleasure to manage the Chinese hamster. A tamed Chinese hamster enjoys climbing on its care taker’s sleeves or sitting on the care taker’s hands. The pups, even though worried in the beginning, get accustomed to handling very soon. In the beginning the pups are very fast; thus it would do you well to hold them over or in their enclosure till they become familiar.