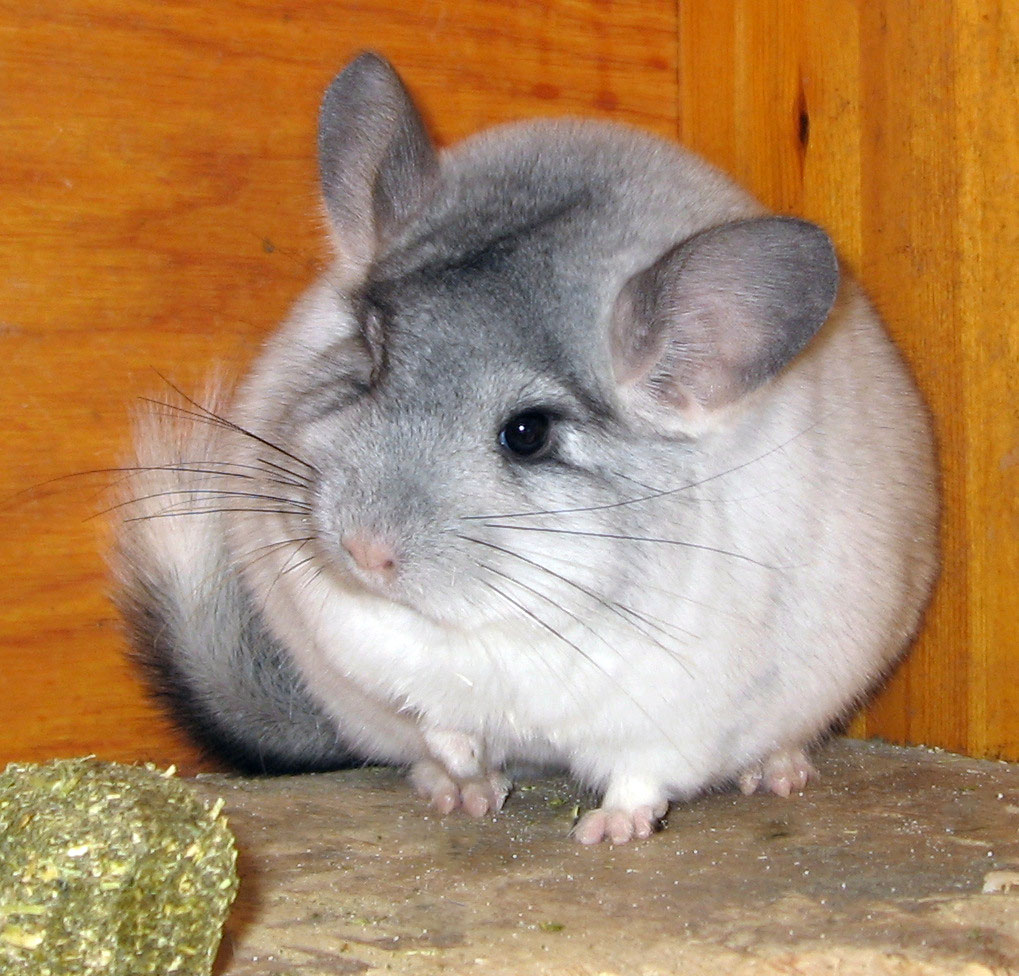 The chinchillas belong to the mammal category. Chinchillas are crepuscular (most active during dawn and dusk) rodents, they are a bit bigger and stronger than the ground squirrels. Chinchillas port several colors. The only, natural color seen is the standard gray color. We find them in general colors like black velvet, white, beige, violet, ebony, sapphire and combinations of these colors.

Around the size of a little rabbit

The male is normally smaller than the female

These are very clever, integrated, and curious as well as independent, and if you wish to build up a rapport with them, you have to spend time and endure to appreciate and communicate with him. Chinchillas are capable of distinguishing a male and female human being! They do not smell and are very hygienic creatures. They draw back their whiskers to clean them! Chinchillas bathe with a special kind of dust, but do not need water for their bath.

They hail from the mountains of the Andes of South America and live in settlements called “herds” at heights around 4,270 meters (14,000 ft). In the past chinchillas resided in the Andes Mountains of Peru, Bolivia and Chile, but as of today their colonies continue only in Chile and Peru. Female chinchillas gain sexual maturity at the age of 8 months to 1 year, because the males become sexually mature in almost 5 months. However, chances are bright for a chinchilla (or chin) to meet puberty before this time. When females meet the age of 6 months, they begin to go into heat every other 25 or 35 days. Usually a female delivers two litters a year, each having 1-6 kits.

Keep your chinchillas in wire cages, if not, they gnaw, and escape. They may heat up in an aquarium-like cage. Ensure your wired cage does not have a coating of plastic or painting, since the chin will consume them and get sick. Give the chins enough space in the cage for them to have exercise. The chins enjoy playing and running about, for which you need to house them in a big cage, especially if you do not allow your chin to have enough fun outside the cage. An unhappy chin is one that cannot run about and play.

Give your chinchillas a regular supply of hay (Timothy/orchard grass/Brome etc), rich pellet (no treats included). If possible, avoid alfalfa because their pellets already have alfalfa for a base. Feed them water regularly. For treats, feed your chins with cheerios, rose buds, rose hips, unfrosted shredded wheat and whole-wheat pasta. Avoid items like nuts, veggies, raisins and fruits that are rich in sugar content as they upset the chin’s microbial balance. If you make any change in their food, gradually mix the new one with the old.

Chinchillas are gentle and loving animals; do take care of them. In case you handle them from infancy, they become quiet and domesticated. Handle them with care; they are excellent pets. Handle your pet, as you would do with a kitten by gently sliding one of your hands beneath its belly and the other over the chinchillas. For it to feel secure, support the chin’s bum and hind legs with your hand. Avoid grasping the chin tightly, but bear in mind that they are fidgety. Thus, grasp them carefully.