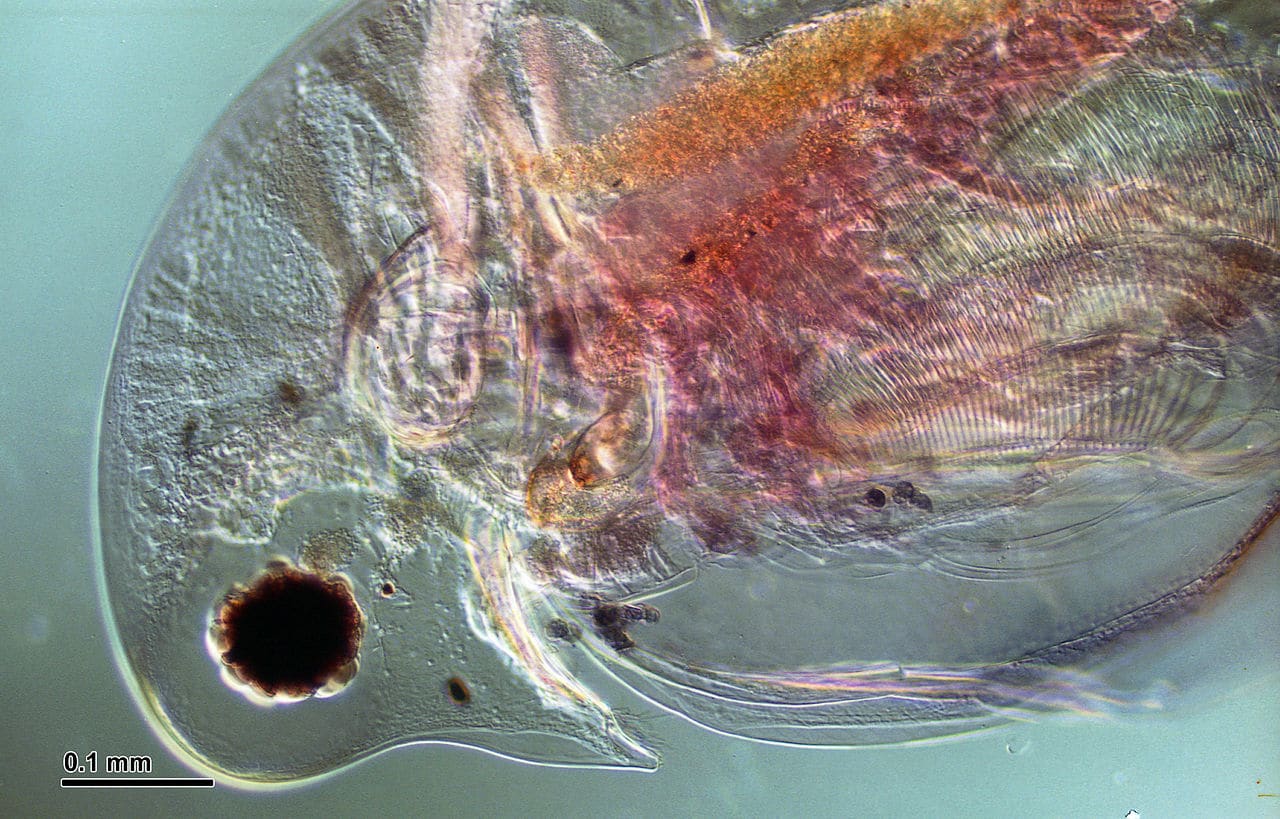 Daphnia is a genus of a small Planktonic Crustaceans and are members of the order Cladocera. They are also known as water fleas. The two most available species of Daphnia are D. Magna and D. Pulex. The magna is a large and Pulex is a small and common species. The Daphnia is a large genus and there are about 200 species which belong to the Cladoceran family of Daphniidae. Daphnia is an important source of food for fishes and other aquatic animals. They are transparent organisms.

Daphnia are filter feeders. They eat unicellular algae and various kinds of organic detritus such as bacteria and Protists. Just behind the head, their heart is located at the top of the back. Under the normal conditions, their average heart beat rate is approximately180 bpm. Their body is usually 0.04 to 0.20 inches long and is divided into segments. But, this division is invisible. The Carapace is the important feature of their anatomy. The Carapace is a folded shell like structure that covers the organism. The outer covering of this organism is clear which shows most of the internal organs at work, as well as the heart. With the help of a microscope, you can also see their heart beating and their last meal. The head of the Daphnia has both dark colored compound eye and numerous antennae which are used for swimming and feeding. Inside the Carapace, they have leaf like limbs which produce currents of water and carries oxygen and food to the gills and mouth. They are found in freshwaters such as lakes, streams and ponds. They are also found in rain filled tire ruts. They are habitually the most plentiful organism is a water body. In the open water lakes, they live as Plankton. The life span of the Daphnia depends on the conditions of environment. At the temperature of 20 degree C, their approximate life span is 50 days. In the life cycle of the Daphnia, four distinct periods are recognized, and they are egg, juvenile, adolescent and adult. The Female produces a brood of eggs in most of the growth season, every time they moult. This brood contains 20 eggs. Under usual conditions, these eggs hatch after one day and remain in the female’s brood pouch for around three days.

Daphnia reproduces both sexually and asexually. This process is called Parthenogenesis, where male gametes and essential. Parthenogenesis occurs during the summer season. So, the entire population of the Daphnia will consist almost completely of female. In the wild, during the late spring, early autumn and summer season, they reproduce by Parthenogenicity. The reproduction mode changes after the growing season ends. The female Daphnia produces tough “winter eggs” or “resting eggs”. The asexually produced offspring are females and a small number of males are also produced.

To test the effect of the toxins on an ecosystem, then the Daphnia may be used in certain environments. This feature makes them an indicator genus. Particularly, they are useful because of their reproductive abilities and short life span. As they are transparent, their internal organs are easy to study in live specimens. They are also useful because of their thin membrane. This allows for drugs to be added to this organism. Daphnia are prone to alcohol intoxication like many other organisms.