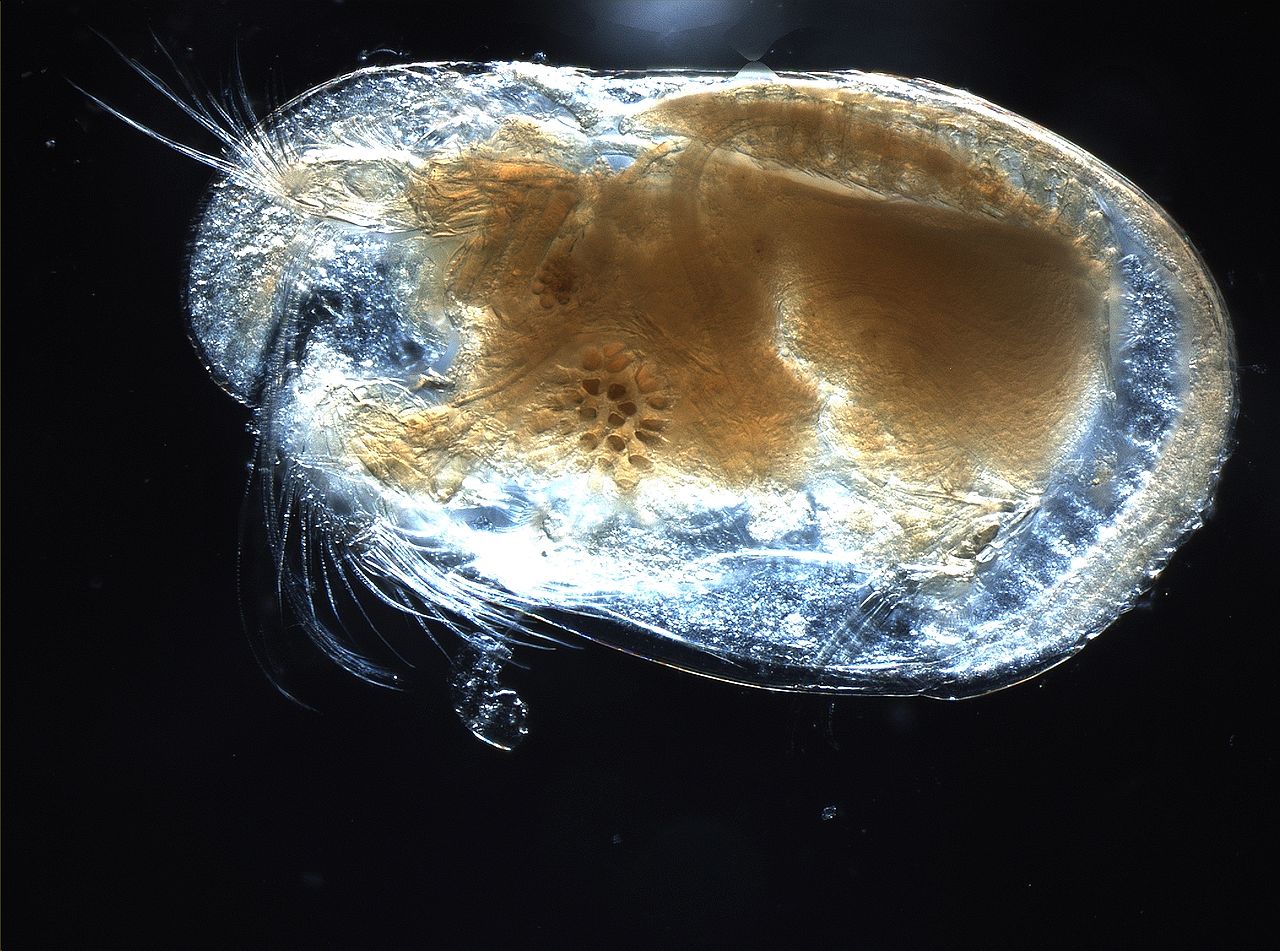 Cypris is a type of crustacean (Ostracods) which is related to shrimp and mussels. With a hard outer cell, they are about ½ to 2 mm long. Usually, they are found in freshwater ponds. At the shallow edges, they scuttle around among the debris. Between the two halves of their shell, they swim very smoothly with appendages. They withdraw their limbs into the shell, if disturbed, and clamp the halves closely together.

Cypris can be seen even by those with poor eyesight. However, their opaque shell makes it difficult to see their internal structure. Between the two halves of the shell, just the limbs and projection become visible out of the gap. For laboratory examinations, young specimens are most rewarding, because, their shells are more transparent than those of the adults.

Dating from the late Cambrian period to the present time, there are about 10,000 fossil species of Ostracods. For chronicling marine sediments, their vast profusion and extensive distribution have made them useful as an index fossil, especially in oil exploration.
Usually, in fresh water ponds they are less commonly found in open waters. As compared to other small Crustaceans, they are possibly less attractive creatures because of the opaque and strongly flashy shell. In the appearance, the Ostracods are very similar. Its appearance makes it less than easy for those who are not expert to differentiate one species from another.

The continual motion of the Ostracods makes them a pest to the person using the Microscope. They also disturb the observation of other organisms under the microscope. In the china shop of the sub-millimeter arena, they appear to be bulls.

Ecologically, marine Ostracods are part of the Benthos or Zooplanktons, because, they live in the upper layer of the sea floor.

Many Ostracods, particularly, the Podocodia are found in fresh water. The terrestrial species of this organism are known from the humid forest soil of Tasmania, New Zealand, Australia and South Africa. They have a broad range of diet and its group includes filter feeders, carnivores, herbivores and scavengers.

According to the data of the year 2008, there are about 200 genera and 2000 species of Non-marine Ostracods, even though a large part of diversity is yet to be classified, as is evident from the undocumented diversity of their short term habitats in  hotspots of Australia and Africa. More than half the Generic diversity of the Non-marine Ostracods represented by about 1000 species and 100 genera belongs to one family called Cyprididae. Many Cyprididae occur in the short term habitats and they also lay pathogenically drought-resistant eggs and have the ability to swim. These biological features help them to form successful radiation in these temporary habitats.

The word “Ostracods” come from the Greek word óstrako, which means tile or shell. Because of the practice of voting with shells, the word “ostracize” comes from the same source.

In the fossil records, with their discovery from the early Ordovician period (lasting about 45 million years, starting 488.3 million years ago and ending 443.7 million years ago) to the present, the Ostracods are the most common arthropods and this has been authenticated by the continuous discovery of fossils right up to the present time.  An outline Micro faunal scheme that was compiled by M.B Hart was based on both Ostracoda and Foraminifera. In the Baltic amber of the Eocene age also, the fresh water Ostracods have been found.

On a local and a regional scale, Ostracods have been mainly useful for the Biozonation of marine strata. Because of their small size, widespread Occurrence, easily preservable nature and generally molted condition, they are very useful indicators of Paleo environments. The body of the Ostracods is covered by two valves; apparently look like the shell of a clam. But, there is a difference between the soft parts (appendages) and hard parts (valves).

The body of the Ostracods consists of thorax and head, which are divided by slight constriction. Nothing like many other Crustaceans, the body is not visibly separated into segments. The adult gonads are fairly large. While, the abdomen is absent.

On the body and appendages of the Ostracods there are many sensitive hairs and these are the primary senses, likely touch. They have a single Naupliar eye, but in some cases, they have a pair of compound eyes also.

Male Ostracods have two penises, which are parallel to two genital openings. The individual sperms are often large and they are twisted up within the testis earlier to mating. In some cases, the uncoiled sperm can be up to six times the length of the male Ostracod itself. Mating occurs during the swimming, when the large numbers of female Ostracods join the male. Some species of the Ostracods are partly or completely Parthenogenetic.

In many Ostracods, eggs are either directly laid as plankton in the water, or they are attached to the vegetation or the bedrock. Though, in some species of the Ostracods, the eggs are clutched inside the shell and give them a great level protection. The eggs hatch into the Naupulis larva because they already have a hard shell.

In the both the aquatic and terrestrial environments, a variety fauna prey upon the Ostracods. The Ostracods are a source of nutrition for the Hydra and small Fishes. The action of certain Cuspidariidae in detecting Ostracods with Cilia sticking out from inhalant structure is an example of predation in the marine environment. Amphibians like Rough Skin Newt kill many Ostracods.

Some Ostracods produce luminescent chemicals from their light organs of the body. Some Ostracods use light for mating, while most use light in defense. These types of Ostracods are known as “blue tears” or “blue sand” because, in the dark night, they glow blue.