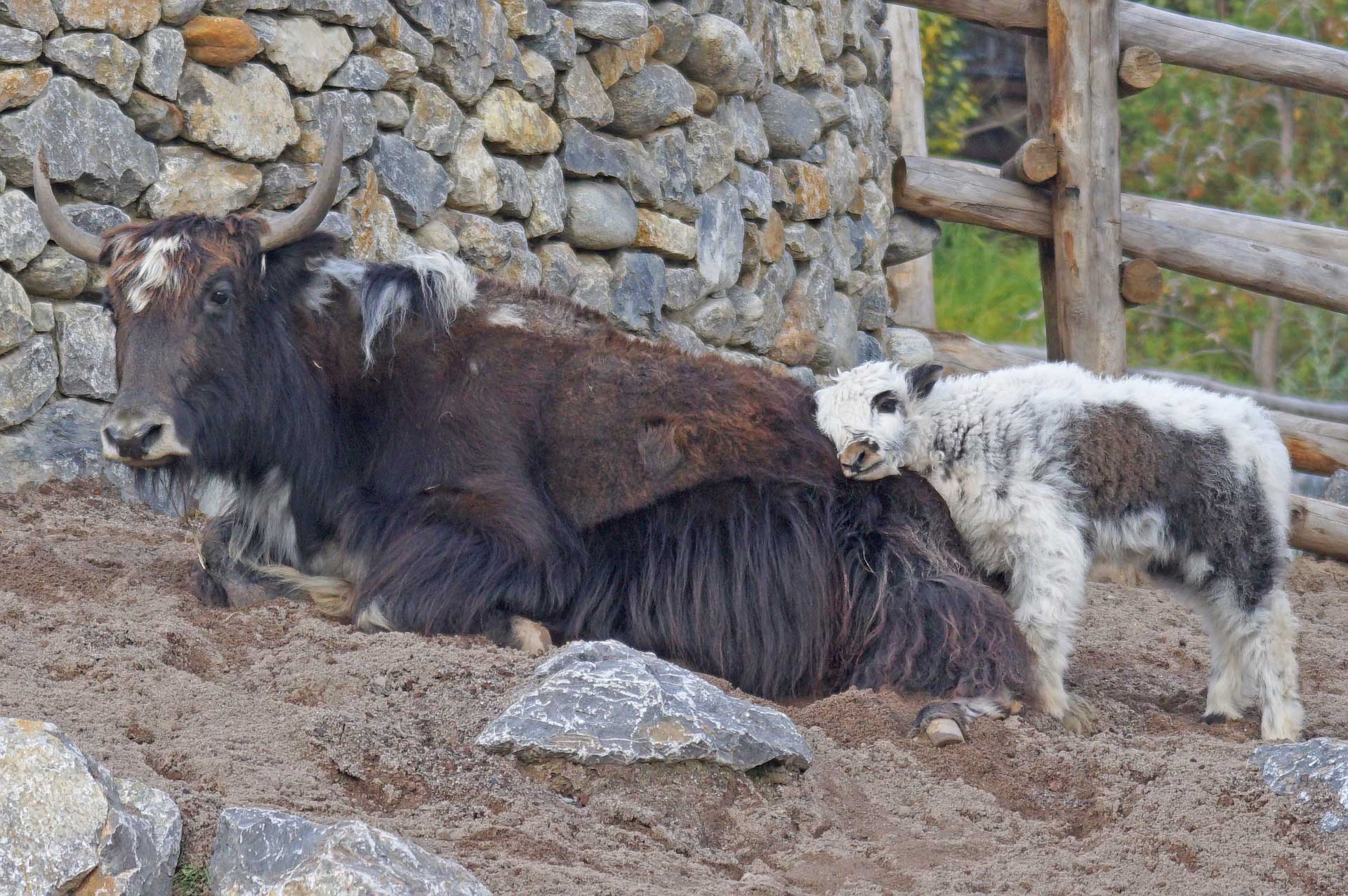 The yak is a long haired animal found throughout the Himalayan region of Southern Central Asia, Tibet Plateau and also in Russia and Mongolia. They belong to the genus Bos. They have a tendency to gather in herds from 10 yaks to 100 yaks. There are only few female yaks in one herd.

The Yak is a heavily built animal and it has rounded cloven hooves, bulky frame and sturdy legs. In the parts of Central Asia, they are used for transporting large loads and pulling heavy farm machines through the mountain passes. An adult wild yak is about 1.6 to 2.2 meters tall at the shoulder and has 305kg to 1000kg weight. Domesticated yaks are smaller than the wild yaks. Male yaks are normally 350 to 480 kg in weight and female yaks are 225 to 255 kg. Their average lifespan is about 20 years. Yaks are only wild Bovids with this size. They have extremely long and dense fur, which hangs down lower than their belly. Generally, wild yaks are dark, black to brown color. However, domestic yaks are fairly variable in color. They have patches of brown and cream color.

The Yaks are friendly in nature and can be easily trained. They have firmed, dense horns which they use to break through the snow to get plants. They also use their horn in defense. In the male yak, the horns sweep out from the surface of the head, and then bend forward. And they range from 48 to 99 cm in length. The horns of female yak are smaller and have an upright shape and they range from 27 to 64 cm in length. Over their shoulders, both male and female yaks have a short neck and pronounced hump. They have a wide forehead and small ears. Yaks are herbivore and they spend their most of the time in grassy plains. They feed on grasses and wildflowers. They graze on herbs, lichens, moss and tubers. They have great lung capacity to absorb more oxygen at high altitude. Their long shaggy hairs with dense woolly undercoat over the flanks, chest and thighs keep them warm and protected from cold.

Depending on the environment, the yak breeds in the warmer months, between July and September. The gestation period lasts between 257 t0 270 days. After a conception period of 9 months, the female yak gives birth to a single calf. But rarely, the female yak gives birth to twins. Within 10 minutes of birth, the calf is able to walk, and soon they rejoin the herd. Male yaks became aggressive during the rut.

United States saw no yak farming up to 30 years back. Only some large farms in Canada and a few in Europe had hosted this exotic animal. However, today, 7500 animals have been reported on farms ranging from Tennessee to Alberta from the United States. Today, yak meat is finding its way to American restaurants, butchers and supermarkets, where they are sold as purely herbivorous lean bison meat.

Yak farming has its stronghold in Colorado, but growth of farming is picking strongly all over the coastal region states like Washington, New York, Northern California as well as Vermont, not to speak of a rancher raising these animals in the heat and humidity of Fort Worth, in Texas that these animals detest as they prefer the snowy arid winters and require little or no shelter.

In the Tibetan Plateau, yaks have been domesticated by the people of Qiang about 4500 years back. The Qiang also bred the yaks with the cows that live in higher pasture ground.
In the UK, Cheshire Farms, 5000 miles distant from the Himalayas, were the first to venture into yak farming, where they bred the yaks with Holstein cows to produce a hybrid offspring called the Yow”. They plan to sell Yow meat to the local pubs.

Yaks are domesticated for thousands of years, mainly for their milk, fiber and meat and as a beast of burden. The dried dung of yak is important fuel, which is used all over the Tibet. On the high treeless Tibetan plateau, it is the only available fuel. In Mongolia, the yak’s milk is fermented in a leather pouch and distilled as a “milk wine”. A herdsman uses everything from yak to sustain his life. Yak is valued for dung, milk, meat and wool. During their lifetime, the products from yak are used for various purposes. Primarily milk and meat of yak is important products. Milk of yak is often processed to cheese called “Chhurpi” in Nepali and Tibetan language. In Tibet, people mainly consume Butter tea, which is made from yak’s milk.

The Yak and Spirituality

The Tibetans love their yak, a relative of the cow, and bond with spiritually. They claim that the yak and the Tibetans share a symbiotic relationship, and that, over the years, each has complemented the evolution of the other. Tibetans have long used the cheese, butter and milk provided by the yaks as part of their staple food., and the yak has been a steady partner in the transportation of goods in the inhospitable mountainous terrain. In the true sense, Tibetans, at least most of them are pure vegetarians who believe that slaughtering a yak is wrong, and eat yak meat only when it dies, preferring to abstain from this meat on other days.

Since the Buddhist religion believes that the negative Karma from slaughtering an animal outweighs the positive effects of spiritual mantras, religious strictures are clear; yak bone jewelry must be made only from the bones of those yaks that died of natural circumstances because, they believe that things to do with spirituality must have pure sources as backup.