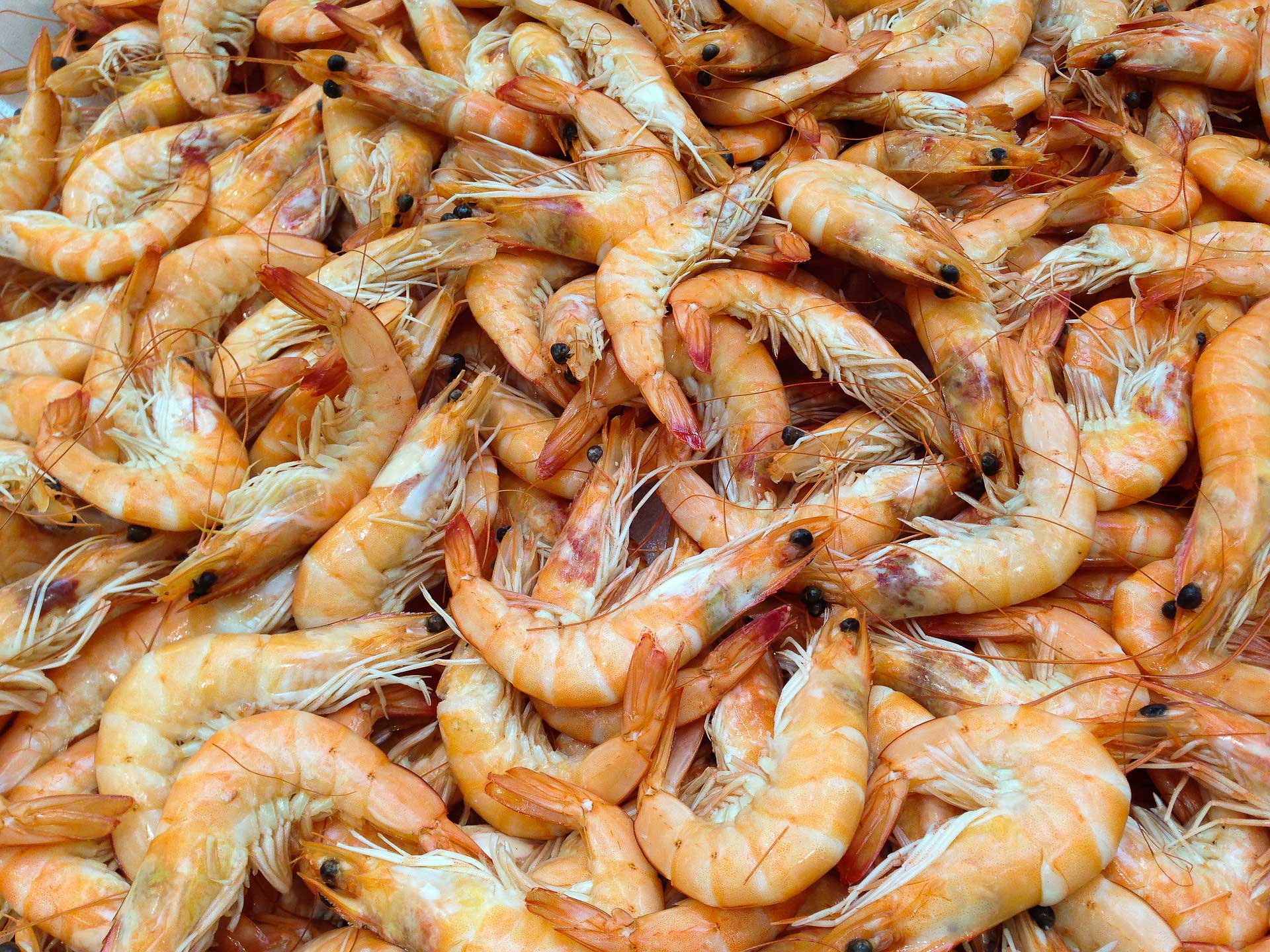 The prawn is the general name given mainly in Ireland, United Kingdom and in the commonwealth nations for big swimming crustaceans or shrimp, particularly for those of commercial importance in the seafood industries. Those shrimps that belong to this class are often of the subclass, Dendrobranchiata. In North America, this term is not often used, especially for shrimps in fresh water.

In United Kingdom, we find prawn more than shrimp in the menus, whereas in the United States, it is just the reverse. Any big shrimp is casually called prawn, particularly those numbering 15 (or less) in a pound (they are jumbo prawn or king prawn).

The Difference Between Shrimp and Prawn

In general, prawns appear bigger with claws on 3 pairs of their legs that are also larger. Shrimp have shorter legs and only two pairs have claws on them and they have plate-like lamellar gills.

Both shrimp and prawns belong to the Decapod Crustacean Group, with 10 legs and an exoskeleton. You can find them in both sea water and fresh water in habitats that have plenty of food. They stay on the ocean floor. They have similar flavors, can be minute to large.

Though these two names are mostly interchanged, but recently, in terms of commercial farming, only fresh water inhabitants are called prawns (palaemonids), while the term shrimp refers to marine penaeids.

The appearance of the shrimp’s physical traits varies according the species to which they belong.

But still, the body structure of the decapods shrimp is very much alike, in all the 2000 varieties, which are currently an endangered species.

The two segments of the body are the head and the thorax.

These two segments are joined together by the cephalothorax and a thin abdomen.

The shrimp activates its mouth, jointly with its gills.

Even though the body is protected by the hard exterior shell, the gills permit the shrimp to obtain oxygen from the water adjoining it.

It is out of this hard shell, that the rostrum, eyes and legs grow.

The shrimp has a rostrum, which is a sharp beak like a nose, extending beyond its body’s head.

While swimming backward and forward in the water, this beak acts as a stabilizer.

One single shrimp is capable of generating great many offspring.

In one session, it is possible for a shrimp to lay 1 million eggs.

It takes just 2 weeks for the eggs to get hatched.

After birth, the infant shrimp merges along with the plankton in the surroundings, so as to get protection and to feed on their own till they are sufficiently grown to hunt for nourishing themselves with the big elements in groups.

The life span of the offspring is short; as such, a large number of them are crucial for the species to flourish. The average shrimp survives for just 2 weeks.

Mating between a pair of shrimps occur quickly. The male pounces upon the female’s abdomen, against its abdomen, and within seconds, deposits its sperm, and quickly frees the female. Sometimes you can see the male continuously pester the female so as to pounce upon it; giving the impression of the  male  fighting with the female, it is perhaps, the male it attempting to mate with her.

This species is a very adaptable; therefore, it is capable of thriving below the surface of any water body, so long as sufficient food is available.

They are able to survive, both in saltwater and also in freshwater.

This variety of invertebrates, appear to congregate in crowds adjacent to estuaries and coastal areas, where a sufficient amount of food is available.

A particular species, seen at any location, and suitable for specific environments is exactly adapted to that particular region.

Most of the shrimps belong to the marine variety, whereas 1/4th of them are seen where the source of water is freshwater. The shrimps are capable of surviving in water to a depth of as much as 16,000 ft.

The behavior and appearance of the varieties of shrimps differ in several ways. Yet, among the shrimps of the core group of Caribbean type, the behavior and appearance of the fragile Pederson’s shrimp (above) is very much different from the snapping pistol shrimp or the big commercial pink shrimp. The characteristics of the Caribbean family consisting of the pistol shrimps have big asymmetrical claws. The bigger ones are capable of producing piercing shattering sound. They are a varied family and distributed all over the world. They consist of around 600 species. The colonies of the snapping shrimps are responsible for the main source of noise in the ocean. Besides, they cause disturbance to the underwater and sonar communication. The tiny emperor shrimp is symbolically associated with the cucumbers and the sea slugs, and they are able to free them from osteoporosis.

Most shrimps are omnivorous; however, few have peculiar feeding modes-. Some scrapes algae from rocks. Few are filter feeders; they use their Setose (bearing setae or bristles) legs for sieving. Cleaner shrimp are parasites; they feed on necrotic tissues of the reef fish that they groom. Shrimps are in turn eaten by different types of animals, especially seabirds and fish and often by the host Bopyrid Ectoparasites. The farming of shrimps has brought about a difference from the traditional, petty business carried out in South East Asia to an international industry. Technology has advanced, leading to farming shrimps at extremely greater concentration, and the stock that is bred is shipped all over the world. Almost all the farmed shrimps belong to the Penaeidae family, just two of them, the Penaeus Monodon (Giant Tiger Prawn) and the Litopenaeus Vannamei (named Pacific White Shrimp) are responsible for around 80% of all the shrimps that are farmed. These industrial monocultures are prone to diseases, leading to the wipe-out of the entire population of farmed shrimps in many regions. This has caused a lot of ecological issues. Towards the end of 1990, the increase in ecological issues, continuous outbreak of disease, criticisms and pressure from consumers and NGOs brought about changes in the industry, and strict government regulations were imposed. In 1990, a program focusing on the development and promotion of greater sustainable practices in farming was initiated; this was inclusive of an industrial representative, government bodies and surrounding organizations.

When the demand for these products in the US, Europe and Japan, grew by leaps and bounds, the small farms on just a few acres (which contributed to subsistence farming), were replaced by farms of 100+ acres with heavy technological advances  to enhance the quality and quantity of the product. The shrimps and prawns were now fed on artificial diet and subjected to advanced management techniques.

Texas researchers in intensive shrimp farming have devised an indoor aquaculture method, they call the “super-intensive stacked raceways” that has a higher shrimp output per cubic meter water than any other system of techniques in pond aquaculture, and the interesting aspect is that you can install this system virtually anywhere. This is how it works:

Large enclosed tubs (These are called Raceways), 4 in a column, are used to grow the shrimps.

The water is slowly circulated, but not entirely replaced, thus saving water and other costs. The tubs are moved down in the order of the column in such a way that the babies are always in the top tub and the eldest are at the bottom tub for facilitating easy removal of adults at harvest time.

The innovation here is the ability of raising about 25 kilograms of the U15 shrimp, or the Jumbo Shrimp from one CBM of water, which in other words, is equivalent to an output of one million kilograms of shrimps from one acre, though the actual output can vary from 20,000 (9 Tons) to 60, 000 pounds (27 Tons) per acre of water.

The marketing and commercialization of shrimps are done based on several concerns. Such as, the category in which they are presented, the color, grade and uniformity. The level of omega-3 fatty acids in shrimps is high and the level of mercury in them is low. In general the sale of shrimps is as a whole; however, at times only the meat is sold.

When compared to the other sea foods, the content of calcium, proteins and iodine in shrimps is very high, however, as far as the energy content in the food is concerned, it is low. A meal with shrimp signifies a source of cholesterol, ranging from 122 mg to 251 mg, in every 100 GM of shrimp. It depends on how it is prepared.

The consumption of shrimp, is understood as good for the circulatory system, since the deficiency in the required amount of concentrated fat content in shrimps signifies that a high content of cholesterol in the shrimp in fact advances the ratio of HDL to LDL cholesterol and the triglycerides becomes lower.

Prawns and shrimps are multipurpose ingredients, and mostly they are added in fried rice. The general cooking of shrimps and prawns are, boiling, baking, grilling, frying and barbequing. As for the cooking time, they are as fragile as eggs. The texture of the shrimp becomes rubbery and tough if overcooked. As soon as the color changes to pink, take them out of the heat.

In several cultures, recipes with shrimp are a part of the cuisine. In a good sense, dishes with scampi is compulsorily prepared from the Norway lobster, a crustacean, like shrimp very closely connected to the lobster, rather than the shrimp. Scampi is generally known as “Dublin Bay prawn”, besides, in certain places it is normally used as a substitute for prawns.