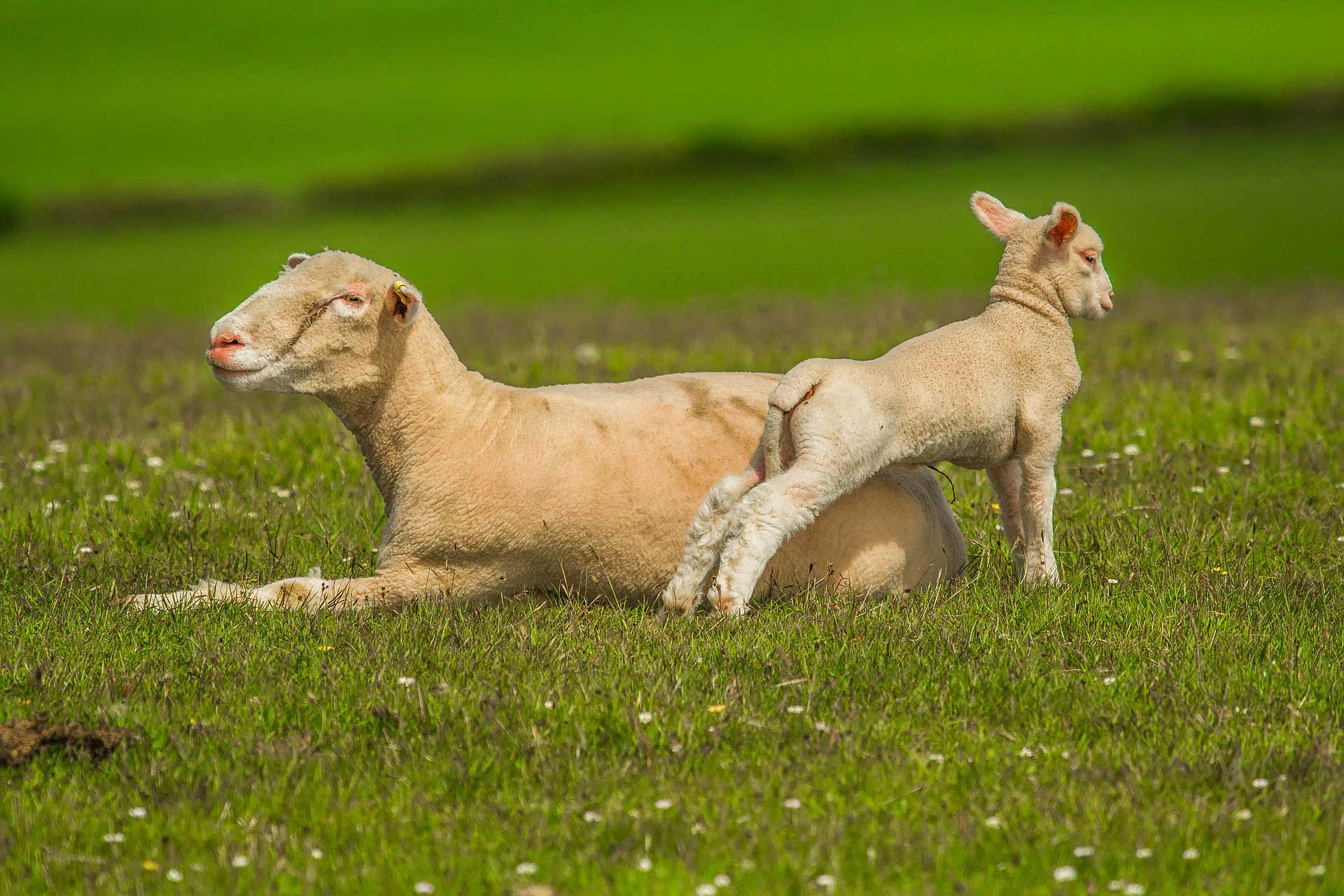 Sheep, biologically termed as Ovis Aries, are ruminant and quadrupedal mammals that are bred as livestock. They are the even-toed ungulates that belong to the Artiodactyla order. Many species from the genus Ovis are collectively termed as sheep, but more commonly the Ovis Aries is called sheep.

The body of the sheep is stockier than the goats. Some of them have horns and scent glands that are present in the hind feet and on the face. The male sheep does not have the beard, seen on the goats. They have short tails, and their outer body is full of hair, under which the fine wool is present. This wool later emerges as the fleece in such domesticated sheep. The male species are called rams, and the female sheep are called as ewes. The young ones are termed as lambs. The adult sheep attain a weight of 80 to 400 pounds.

Sheep are basically herbivorous by nature. Most of the species mainly feed on short roughage or grass, avoiding the woody part of tall plants. These sheep, as well as their relatives, the goats make use of their tongues and lips to choose the plant part that is edible, easy to digest and that has high nutritional value. The sheep know well to graze in monoculture pastures, but the goats are not good in that. Similar to the other ruminants, the digestive system in a sheep is also very complex. It comprises of four chambers, which helps to break down the stems, seed hulls and leaves consisting cellulose into the simple form of carbohydrates. The vegetation chewed by the sheep while grazing turns into a mass substance known as bolus. This mass gets shifted to the rumen through reticulum. The organ rumen has a 19 to 38 liter space, in which the food is fermented by the microorganisms that include protozoa, fungi, bacteria and some archaea that are able to convert carbon dioxide into methane. Like cows, this bolus mass is regurgitated into their mouth back as cud for salivation and additional chewing. This cud chewing process helps them to graze quickly in the day time and store them to chew and digest later. Other than the pastures, they also feed on hay. But it is believed that they can live with this simple diet.

Sheep is called as a flock animal, and is very social in nature. They were considered as a domesticated livestock due to their unique behavior of dominance hierarchy and their natural instinct to follow their leader, who takes them to new pastures or grazing lands. They are not known to defend territories, but they try to form ranges for their home. The tendency to get close to the other sheep in the flock is natural; hence they become stressed or disappointed when they are separated from the members of their flock. The sheep, during flocking, follow their leader, and this leader is the first individual to always make the initial move. If a group consists of sheep belonging to the subgroups of same species, then the female sheep and her descendants are seen to form a group and move together. Sheep too have a similar reproductive system to that of the other ungulate animals. A group of many female sheep is mated by the same male sheep, who is either dominant in the group of males or is selected by the breeder. Sheep are basically seasonal breeders, but there are some species that breed the whole year round. A female sheep becomes sexually mature by the age of 6 to 8 months, whereas the male sheep reaches sexual maturity in 4 to 6 months. But, it may change in different breeds, like the female Finn-sheep reaches sexual maturity by the age of 3-4 months, whereas the female Merino reaches puberty only at the age of 18 to 20 months. An estrus cycle takes place in female sheep after every 17 days, which leads to the emission of a scent. This scent is considered as a signal towards the rams for their readiness to mate. The average gestation period is different in different breeds. Mostly it extends from 142 to 152 days, and the average is considered as 147 days. Generally, the female sheep attaining early puberty has a less gestation period, whereas the ones that takes long time to become sexually mature has a long gestation period.

Sheep farming is an establishment in which breeding and raising of sheep are carried out. The main purpose of rearing is to commercially sell the meat, milk and wool. According to the records of 2012, there is a total of 84, 338 farms rearing sheep in America. Around 80% of the total populations of sheep belong to the large sheep operations. These large operations are mainly situated on the western parts of the United States. California and Texas are considered to be the regions with high sheep population. Even the smaller operations that own less than 100 sheep are carrying out business profitably, but their total contribution is less than 17 percent. According to the data of the Food & Agricultural Organization (FAO), there is above a billion sheep in the world. The popularity of sheep farming is increasing day by day due to its success, and profitability attained by commercially selling its meat, wool and milk. Some farmers also get income by renting sheep to graze the pastures. The meat of the sheep as well as the sheep’s milk has been considered as a staple protein food since ancient times. The meat of the sheep used for consumption purpose is either called lamb or mutton. Lamb meat is actually the flesh taken from the animal aged one month to one year. It should have a minimum weight of 5.5-30 kilograms. This particular meat has more demand than the meat of the older sheep, as this is more tender and soft. The meat of the adult sheep consists of more fatty acids, and hence are said to have a strong taste or flavor than the meat of the lamb. This meat is more suitable for casserole-style of dishes like in Lancashire hotpot. It is quite famous in many cuisines. The leg roast of a lamb is considered the national dish in Australia. They are served on Sundays or for some special occasions. The lamb curry or lamb satay is a popular dish served in Indonesia. The specialty of this dish is that the meat is cooked with the unique species available in the country. It can also be roasted, steamed or fried. The liver of a lamb, which is known as lamb’s fry, is quite famous in Australia and New Zealand. The heart and lungs of a lamb are also main ingredients in the cuisine of Scotland.