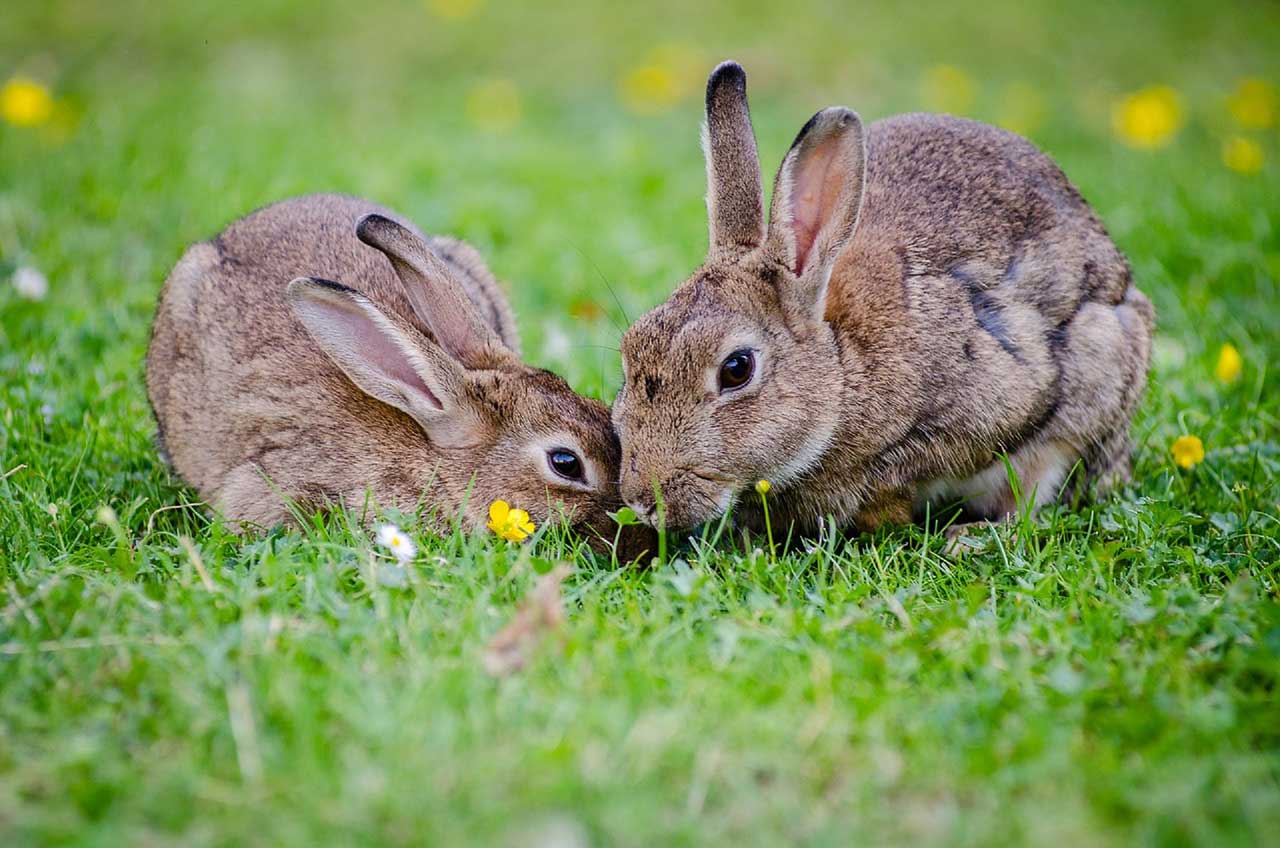 Rabbits are tiny mammals, belonging to the Leporidae family and to the Lagomorpha order; we find them in many places in the world. This family comprises of 8 different genuses in the rabbit family classification. This includes the European rabbit (called Oryctolagus Cuniculus), 13 varieties of cotton-tail rabbits (called genus Sylvilagus) and the Amami rabbit (called Pentalagus Furnessi- this is an endangered species of Amami Oshima, Japan). Besides this, several other species of rabbits exist, and they, together with the hares and Pikas, from the Lagomorpha order of the family Ochotonidae. The female is named doe and the male, buck; a juvenile rabbit is named kit or kitten.

The habitat of the rabbit comprises of the grasslands, meadows, forests, woods, wetlands and deserts. Rabbits exist in groups. The species that is best known is the European rabbi;, they dwell in burrows, underground, or in rabbit holes. A cluster of burrows is known as a warren.

It is in North America that we see over half of the rabbits in the world. Besides, they inhabit Southwestern Europe. Few are seen in the Islands of Japan and Southeast Asia, Sumatra and in regions of South America and Africa. In nature, we do not find them in the major parts of Eurasia; there we see a range of species of hares. Recently, rabbits have entered South America, in a joint effort of the Great America’s interchange. Most of the continents have only one species of rabbits, called the Tapeti. Whereas the majority of the South America’s southern zone do not have rabbits.

The European Rabbits spread into several places, the world over.

These rabbits get affected by several kinds of diseases, including pathogens, like Escherichia coli and Bordetella which affects many humans and animals, besides a disease called a Rabbit Hemorrhagic Disease, a kind of myxomatosis and calicivirus that are exclusive to rabbits.

Mostly, rabies do not infect hares and rabbits and also it is not heard of rabbits carrying these diseases to humans.

Tapeworms like Taenia serialis, external parasites, such as mites and fleas, Toxoplasma Gondii and Coccidian Species are some of the parasites that infect rabbits.

Cunuculture is an agricultural ritual of breeding and bringing up rabbits, normally for the sake of wool, fur and their meat. It is quite different from the practice of raring a single or a few rabbits for companionship, irrespective of choosing for reproduction, for breeding or for caring for young animals. There are few, who are rabbit fanciers, who practice of Cunuculture mainly for the sake of exhibition. Rabbit farming differs from place to place the world over. And in certain nations, it has a low intensity, whereas in other places there is a rise. In several parts of the world they have practiced rearing rabbits, just for meat production. In several countries, we see backyard operations or small-scale holders, whereas mass production of rabbit meat is seen in Asia and Europe. Local breeds of different varieties are used for petty operations. Several local, ‘Rustico’, heritage type breeds or Landrace is used especially in particular geographical regions.

Many people farm Angora Rabbits, exclusively for their high quality wool. From their original habitat in Turkey, they were distributed across the world, where mutations gave rise to a variety of Angora rabbits that differed mainly in the quality (the guard hair percentage in the wool) and quantity of wool. German Angora, one of the best, has a yield of 1000-1800 grams of wool per animal, if managed properly.

Angora Rabbits thrive in temperate climates and are compatible to kitchen gardens as well as intensive commercial farms. Their main advantage is that they not only produce 6.4 times the wool when compared to a sheep in terms of body weight, but also need very restricted grazing space. Moreover, the wool they produce is among the best of animal fibers, is in great demand for exports and commands a premium price in the world markets for the manufacture of woolens.  The electrostatic properties of rabbit wool have positive effects on those with arthritis. Rabbit meat produces good quality of proteins. People use them in different methods in which chicken is cooked. As a matter of fact, the famous chef Mark Bittman has said that rabbits that are domesticated have chicken’s taste, since the two are blank palettes into which it is possible to add any flavor. When compared to chicken, pork or beef, rabbit meat is leaner. The products of rabbits are labeled in 3 different methods; Fryer is the first, which is a young rabbit weighing from 2, 0 kg to 2.3 kg. (4.5 to d 5 lb).. This variety of meat is fine grained and tender. The second product is a Roaster; this is normally more than 2.3 kg. (5 lb) and goes up to 8 months old. Here, the flesh is coarse grained and firm, and compared to the fryer it not that tender. Further, there are giblets that include the heart and the liver. New Zealand white rabbit is the general variety of rabbits used for breeding. China, Italy, Russia, Spain and France are the biggest producers of rabbit meat. They produce 100,000 tons or even more in a year.