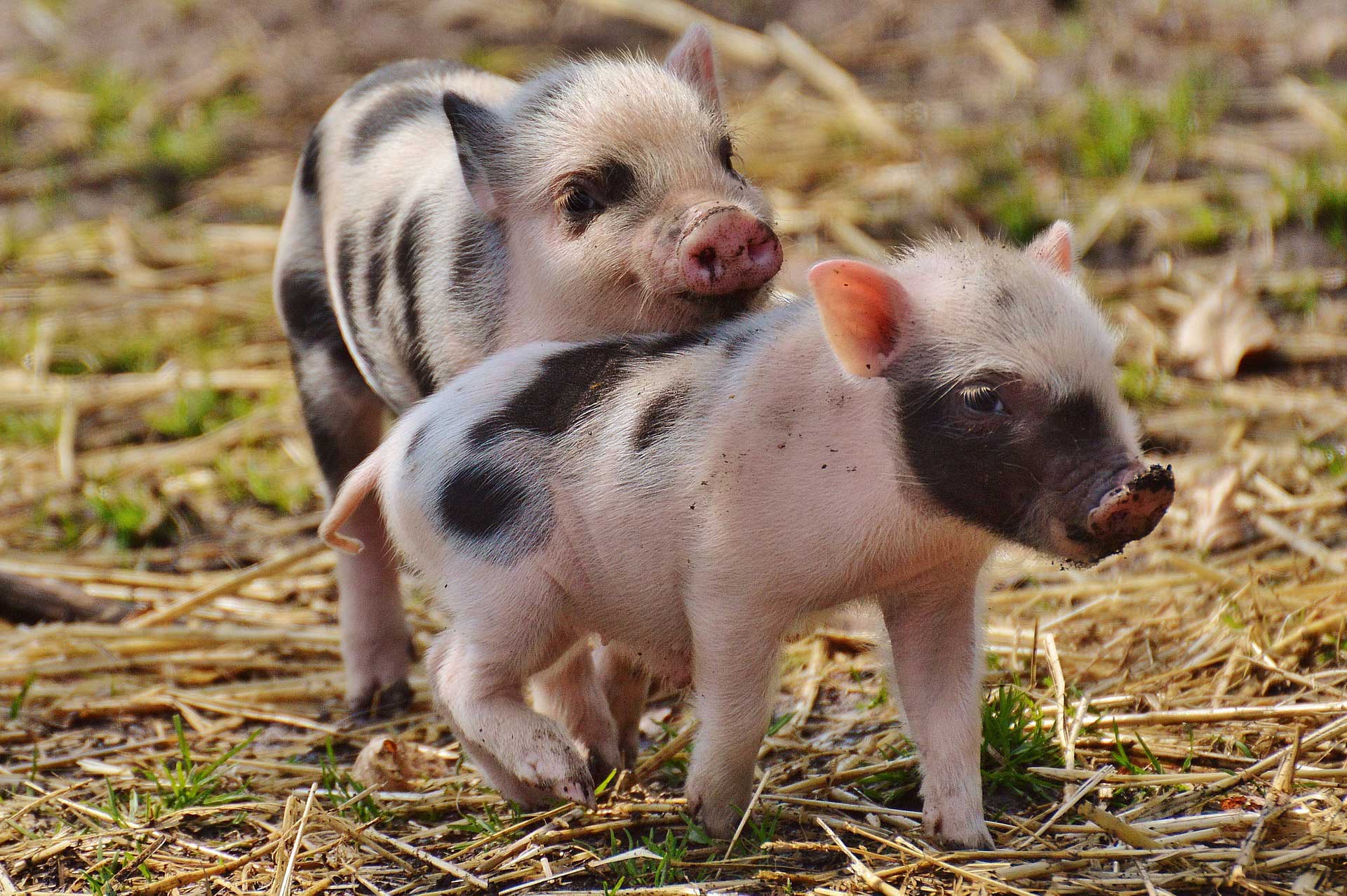 Sus Domesticus or Sus Scrofa Domesticus is the domestic pig that is also referred to as hog or swine. It is an even-toed large ungulate that is believed to be the distinct relative of wild boar. Pigs are mainly domesticated for their meat, which is referred as pork. Other than that, the bones and bristles are used in making commercial products. Some species like the potbellied pig are also kept as pets.

The whole body of the pig may range from 0.9-1.8 m in length, and may attain a weight of around 50 to 350 kg. The head of this creature is pointed, long and warts free. The long snout is the distinctive feature, which is strong due to the presence of a cartilage disk and a prenasal bone. It uses this snout to dig the soil for finding food.  A pig has a total of 44 teeth, out of which the back teeth are used for crushing. The male canine teeth act as tusks, which grows and sharpens as they grind against themselves. It has four toes, hoofed on each foot, two of which are used to walk on soft ground. Domestic pig exhibits skin that is covered by sparse hair.

The behavior of a domestic pig resembles more to humans and dogs, and not like sheep or cattle. These pigs often prefer each other’s company to keep physical contact, but never form large group or herds. Pigs like to eat, and can continuously eat for many hours, if allowed. Similarly, they can sleep for long hours. It is omnivorous, and maintains a unique feeding behavior. It can live on food that is usually eaten by dogs and humans, but the wild counterparts eat roots, grasses, flowers, leaves and fruits. Domestic pigs are considered to be very intelligent, and some can also be trained for performing tricks and tasks.

A versatile behavior of pigs, similar to the carnivorous animals is the bed making and nest building. They use their snouts to make depression or wallows in the soil, and the female counterpart builds the breeding nest for giving birth to their young ones. The female pig makes a depression of a size similar to its own body and then, carries grasses, twigs and leaves in her mouth to fill this depression. These things are then converted into a mound, where it uses its feet to place finer and smaller materials in the middle. When the mound reaches a desired height, she places big branches on the surface that are about 2m long. Then she slowly gets inside the mound to create a depression within the present material. Unlike the other artiodactyls that give birth in a standing position, pigs are known to reproduce in a lying position.

Similar to their wild counterpart, the domestic pigs are known to mate its single partner for life. They are known to mate in two seasons of a year, namely summer and winter. They carry out many courtship rituals before mating. The male pig impresses the female in a charming way by providing her food tidbits, scratching her back with his tusks, tenderly nuzzling her and other activities. Then the aggressive, quick and noisy mating process starts. The female pigs have 6 to 8 piglet litters, so if there is a good living condition with plentiful food and water, the female pig can give birth to a minimum of 12 piglets in a single litter. The female pig, also called as sow, is full of maternal qualities, and takes good care of its piglets. It is said that they should not be confronted while they carry food for their kids, as they may seriously harm you. Postpartum female pigs are said to bite and harm people, but are not considered as aggressive during the normal times. The piglets mature very fast, and attain a good size within 4-5 moths. The lifespan of a pig is around 9 to 12 years. Pig farming means to grow and breed domestic pigs. It is considered as a part of animal husbandry. The main purpose to raise pigs is for their meat, also called as pork. Different styles of farming like intensive commercial units, extensive farming and free range enterprise in which, these creatures are allowed to roam throughout the town, city or village, or may be kept in a simple shelter or in a pen made outside the farmer’s house. In the ancient times, the pigs were raised in a small shelter, closely related to the owner’s residence in small numbers. They were raised only for their meat. They were considered beneficial for eating up the waste products in the house. They are still considered a very important creature that helps to dispose the municipal garbage produced in a large quantity.

These types of pig farms are still operating in many parts of the world. Thousand numbers of pigs are raised in the developed nations in commercial farms in a climate controlled building. Worldwide, around one billion pigs are slaughtered each year, out of which, 100 million is in the United States. Most pigs are killed primarily for their meat, but their fat, skin and other materials too have demand in the commercial market. These things are used in making cosmetics, clothes, as ingredients for many processed foods and also in medical products.

The domestic pigs also have almost all the quality of their wild counterparts. Their unique ability of sensing by smell is the most significant one. Legend says, a farmer had made use of this ability of the pig to recover his lost kid. The pig with mild behavior can be trained to be a good digger that will help to dig up or hunt for many things in the soil like tuber roots, edible mushrooms, etc. They have a good searching skill; hence they always find their food. This creature is considered as unusually intelligent; they can forecast bad weather. They are too sensitive to the changing climate; hence they can easily alert you about the chance of bad weather or of an approaching thunderstorm by behaving very agitatedly. They usually show their agitation by continuously digging the soil to create huge piles of hay or dirt. The culinary name of the pig’s meat is pork. It is a very commonly used meat worldwide. This meat is consumed in both preserved and freshly cooked style. The curing of this meat helps to increase its shelf life. Some of the examples of pork in a preserved form are the smoked pork, bacon, gammon, sausage and ham. It is very commonly used in Southeast and East Asia, as well as in the Western World.