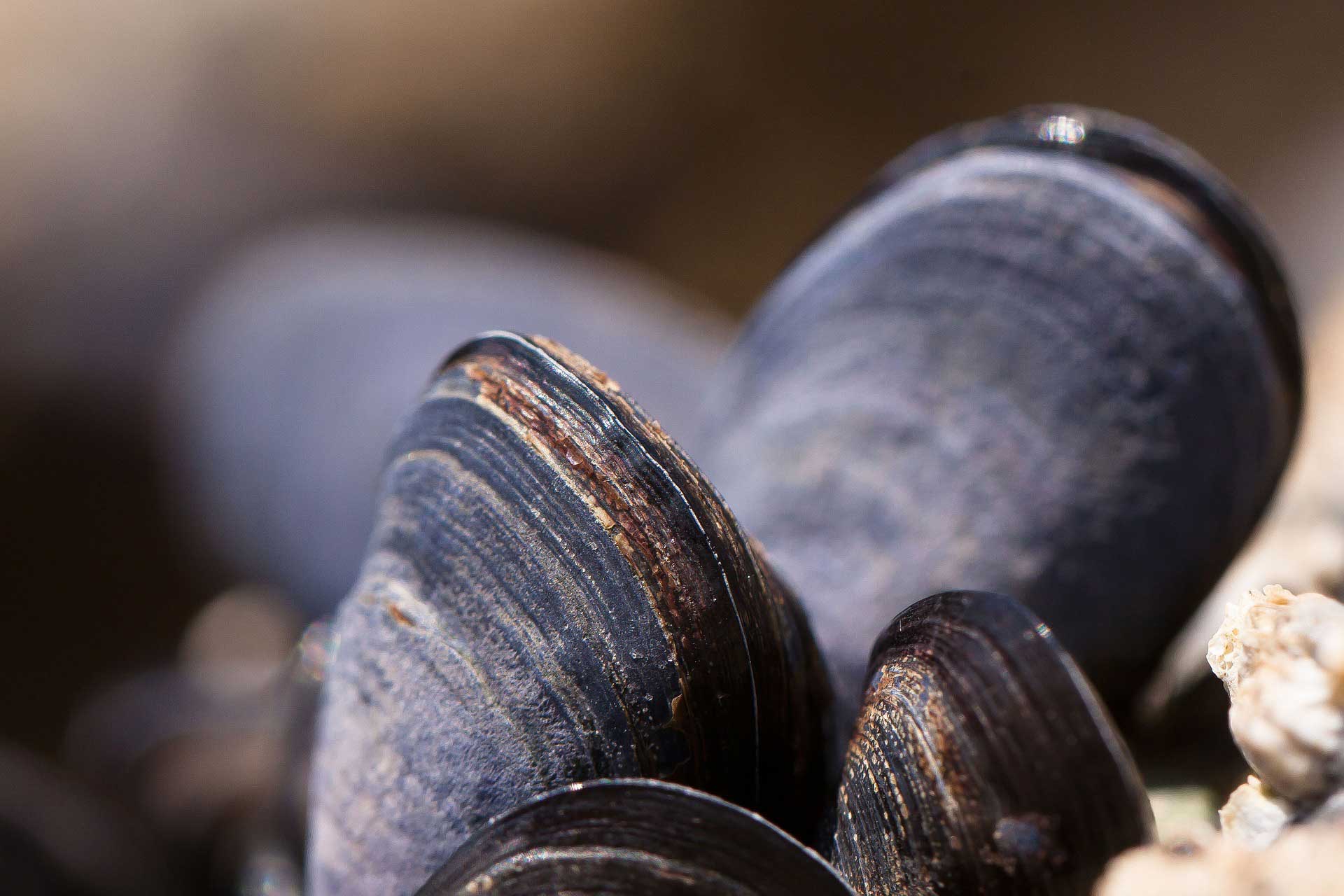 Mussel is a common name referred to marine edible bivalves under the family Mytilidae. Most of them live on the exposed intertidal shores and are firmly attached to the substrate by “beards” or Byssal threads. Some species like the genus Bathymodiolus live at hydrothermal vents in the ridges in the deep ocean. Marine mussels have shells that are characterized by asymmetrical shells brown/blackish-blue hues and longer than they are broad. “Mussel” may also refer to freshwater pearl mussels that inhabit ponds, rivers and lakes as differently classified bivalves in spite of visual similarities.

Their external shell includes two valves that are hinged and attached together by a ligament. Strong muscles close the hinged halves at will. The valves have a significant part to play in supporting the soft inside tissues, protecting against predators and from desiccation.

Mussels have a large organ called the “foot” that helps them to crawl through the substrate, and this appendage in the freshwater mussels is larger than its marine counterpart.

The freshwater mussel and the marine mussels are filter-based feeders, feeding on microscopic creatures in the water and consume floating planktons as well through the gills and then brought to the branchial chamber from where it is funneled into the mouth by the labial palps, and digestion starts here. Mussels, the marine ones and the freshwater ones are gonochoristic, meaning the males and the females have their own reproductive organs and systems are different. After fertilization occurs outside, the larval stage continues to drift for about 3 weeks to six months before attaching themselves to a hard substrate like a rock, using their byssal threads. In freshwater mussels, sexual reproduction takes place as the sperms released into the water are drawn by the female’s incurrent siphon and after fertilization, develop into a larval stage referred to as “glochidium”  that attach themselves to the gills and fins of parasitic fish.

China is the world’s largest producer of farmed mussels, while Spain leads the pack in Europe, and extensive mussel aquaculture is prevalent in the northwest and northeast of the United States.

Some of the Mussel Farming Techniques Are as Under

This method is a technique based on intertidal growth. Here, pilings are planted in a spiral mode on the sea ropes on which the mussels thrive, with mesh to prevent the mussels from falling off.

Here, the mussel seeds or spat is collected, and deposited on better and less congested substrate to ensure higher growth and less harvest problems.

This involves the seeding of socks of rope mesh suspended from a raft.

This method follows ropes seeded with mussel seeds and hanging from a rope backbone with floats, and is said to be the latest of mussel culture.

The mussels attain marketable size of about 40 mm in 12-15 months and different methods are used for the various types of cultures as given below:
For Bottom Line Culture—Dredges used
For long line and raft culture– Platforms lowered under the lines of mussels are pulled to the surface, and loaded into tanks on a vessel in the vicinity, and stored in seawater. For thousands of years, marine mussels have been a staple food of the humans. About 17 edible marine species like, Mytilus. Galloprovincialis, Mytilus Edulis, Perna, Canaliculus and M. Trossellus have been identified as fit for human consumption. Freshwater mussels are generally not considered healthy to eat.