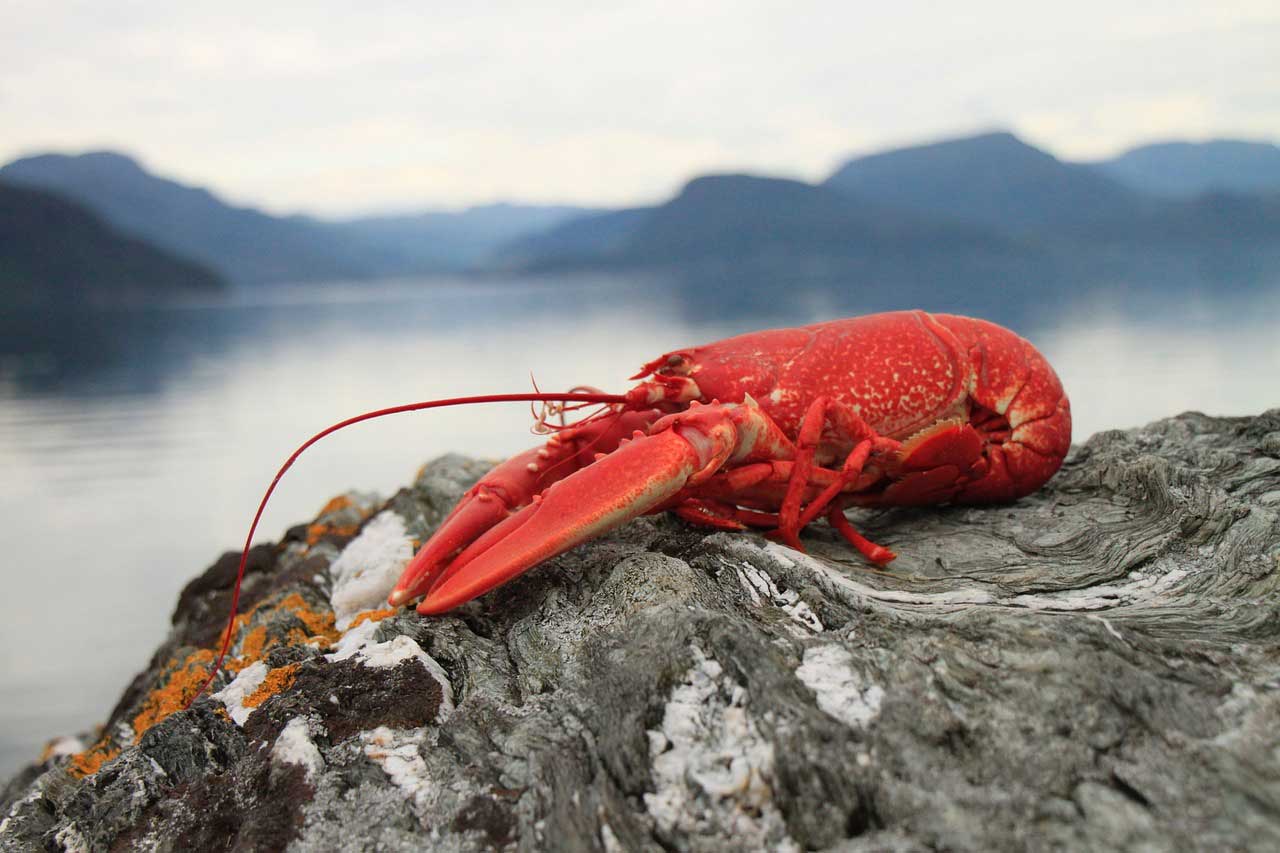 The Clawed Lobsters encompasses the (Nephropidae or at times the Homaridae) family, comprising of large crustaceans of the aquatic group.

Their body is long and the tail is muscular, they dwell in burrows or crevices in the floor of the sea. They have 5 pairs of legs, of which three of them, inclusive of the first pair possess claws; the claws of the first pair are comparatively larger. When compared to the other seafood, lobsters are of economic importance and prized very highly. In the population of their coastal areas, they belong to few commodities which are very profitable. The species which are of commercial importance comprises of the Homarus of the Northern Atlantic Ocean and the Scampi- the Nephrops, which is the genus belonging to the Northern-hemisphere and the Metanephrops genus belonging to the southern-hemisphere. Even though many other groups belonging to crustaceans possess the word “Lobster “attached to their name. The term Lobster, which is not properly defined is normally referred to the clawed lobsters; they belong to the Nephropidae family. The slipper lobster or spiny lobsters have no close relation to the Clawed Lobsters, which do not squat lobsters or have claws (chelae), The 3 families of freshwater crayfish and the reef lobsters are very closely related to it.

The freshwater lobster is actually referred to as Crayfish, mudbugs or Crawdads. They resemble small lobsters and belong to the super families Parastacoidea and Astacoidea. You find them in running fresh water like streams and brooks, rice paddies, ditches and swamps, but cannot survive in polluted water.

Lobsters belong to the invertebrates; their exoskeleton has a hard shield. Similar to the majority of arthropods, lobsters need molt for growth, without which they are left defenseless. While molting is carried out, many of the species have color changes. Lobsters have 5 pairs of walking legs; the three pairs in the front posses claws. The forward-most is the biggest of them. Even though similar to the majority of the arthropods, lobsters have bilateral symmetry. The claws of certain genus claws are peculiar and unequal.

The anatomy of Lobsters comprises of the cephalothorax that joins the thorax and the head; the two are enclosed within the abdomen and the chitinous carapace. The lobster’s head contains an antenna, antennules, the first and second  maxillae, mandibles, the 1st and 2nd maxillae, and the 1st, 2nd and the 3rd maxillipeds. Lobsters dwell in marshy surroundings right below the ocean, as such, quite often they make use of the antennae which act as sensors. The eye of the Lobster possesses a reflective construction over the concave retina. Contrary to the others, the highly complicated eyes have a reflected ray concentrator (which are lenses) and a concave retina. Swimmerets are included in the abdomen. The Telson and the Uropods together form the tail.

It is only after the molting of the female that the Lobsters are able to mate. Prior to this, the female discharges pheromones (a sort of chemical) in the water as a signal to the adjacent males, informing them that she is getting ready to molt and for mating. In case a number of males present have an interest in the female, it leads to a quarrel between them for the female and the one that becomes triumphant in the fight, carries the female to its cave and shields her from the predators, because she is defenseless when they molt. On shedding her hard exoskeleton, the male, calmly, turns her upside down and penetrates her abdomen using his 1st pair of pleodods. He then drops packets of sperms into the female sperm receptacles; further she stores these sperms for a period of 15 months prior to the release of her eggs. When the female is convinced of the exact time for releasing of her eggs, she releases them through the seminal receptacle, which further gets fertilized with the stored sperm. All the 5,000 and more eggs (a few elder females hold 100,000) are then attached by the female below its tail by means of a substance in the form of glue; this holds the eggs together for the remaining 10 to 11 months. The eggs resemble berries, therefore at this period the female is called Berried Lobster.

The hatched baby lobsters do not resemble their parents. Prior to the tiny larvae exhibiting any similarity of the parent lobster, they molt 4 times, and further 20 times within a span of 6 to 8 years prior to attaining the legal size when they are ready for harvest. These tiny larvae, the infant lobsters float on the ocean’s surface. Only some of the eggs that are hatched in every summer survive in the initial stage of their life; these tiny lobsters become food for many of the marine species. On completion of the first stage of the larvae, the tiny lobsters travel to the floor of the ocean in search of protection between the rocks and seaweeds. It is here that the small lobsters remain hidden till they are big enough to challenge their predators.

The major part of the day is spent by the Lobsters trying to get rid of their predators. The juvenile lobsters are defenseless and tiny; therefore it is mandatory for them to look out for an ideal shelter immediately. When they succeed in burrowing into the mud, sand or pebbles, they remain there for the initial few years of their growth, with the confidence of gaining safety. The adult lobsters are capable of defending themselves against the many predators; as such, they stroll around more frequently than the juvenile. The bigger lobsters, travel to the shore during the summer periods to remain in warmer water. Certain Lobsters travel down the coast. The fully grown Lobsters travel an average distance of 19 miles while migrating.  Certain Lobsters migrate down the coastal area, for a distance of 918 miles in a period of 3 1/2 years.

Day by day farming of Lobsters for commercial purposes is gaining popularity and earning much profit in its business. Lobsters are bigger, when compared to the other high prized marine crustaceans. The weight of a matured lobster is from 250 to 400 Grams. The farming is easy, and is profitable to farm lobsters with carp and many species of fish. It is essential to manage the pond, while farming lobsters. More oxygen than usual is necessary in the pond where lobsters are reared and harvested. While choosing a pond for harvesting, make sure of the facilities for frequently changing the water. The varieties of Lobster available are vast. Of the available species, it is highly profitable to farm the Tiger Lobsters Bamboo and Adik-Adik Lobsters. The reason is, these species have faster growth, and demand for them is high and it is dear in the international as well in the local markets. The three species mentioned above are not the same; just like their names, they differ from one another. The legs of the Bamboo Lobsters are striped, with the bamboo appearance; the Adik-Adik Lobsters are of reddish-black color. The legs of the Tiger Lobsters are spotted. Based on the rate of production and the location, it is possible for you to make a selection of the three of them. It is in their ability to breed and the size that lobsters that matter in a sale.. The price for an initial beginner kit of young lobsters begins from $75. Lobsters that are on the verge of breeding costs $20 to $25 for single one.

Homarus Gammarus is a European lobster, which is in high demand, and the experiments concentrated on culturing the European Lobster using re-circulated sea water at land-based locations to obtain plate sized portions is yielding good results.

High density rearing of lobsters in a stack system is now patented, based on which rearing in deep tanks in high intensity is achieving encouraging results. The UK and Irish coasts are seeing a boom in lobsters unlike several parts of the world, where, due to overfishing, lobsters have decreased heavily, which, is not to say that lobster dishes there are any cheaper there than the rest of the world. The British Cod, that were the main predators of lobster larvae, when removed from the ecological system, allowed the lobsters to spawn in abandon, leading to their increased natural population.

Lobsters are either steamed or boiled alive. The cooking time for a pound of lobsters is 7 minutes and for every additional pound it is 3 minutes.

The various lobster dishes are Lobster Thermidor and Lobster Newberg. Besides, it is used in preparing broth, soup, capon Margo and lobster rolls. When you dip the lobster meat in clarified butter, you get a sweetened flavor. The color of the shell of the lobster changes as it is cooked, from blue to orange. The reason is the heat resulting from the cooking, breaks down a protein, named Crustacyanin that holds back the orange tint of the chemical called Astaxanthin. This is seen in the shell too.