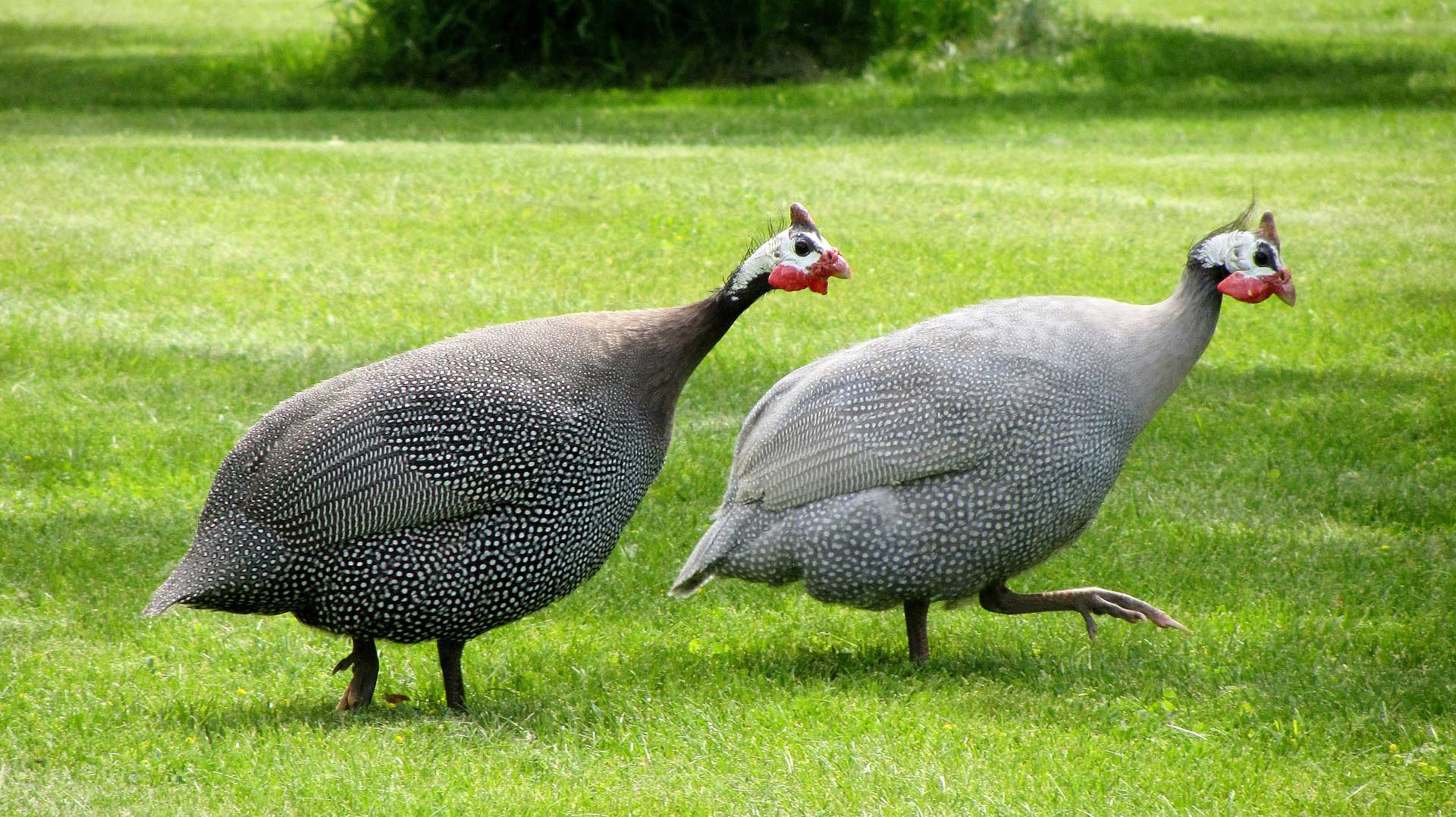 The guinea fowl is the name of a group of chicken like birds that belongs to the Galliformes order. But, while the chicken belongs to the pheasant family, Guineas have their own family, Numididae. These birds are endemic to Africa, and can be seen travelling in gregarious and large flocks. It was introduced to the European regions by the Portuguese explorers belonging to the 15th century. Later, it was introduced in America by the early settlers. In this group, there are seven Guinea fowl species, out of which the most commonly and popularly found species is the “helmeted pearl”. It is the weirdest looking species that exhibits featherless white face, oddly shaped head, polka-dotted gray shaded feathers and wattles of bright red color.

The species of Guinea fowl possess a black or dark gray shaded plumage that also exhibits dense white colored spots over it. These birds belonging to the seed and the insect eating family, look similar to the partridges, but have featherless heads. The species from the Guttera genus have a specific black crest, whereas the vulturine Guinea fowl has a patch of brown shade on the nape. Some species measure about 40 to 71 cm in length, and attains a weight of 700 to 1600 gms. A Guinea Fowl lays eggs, depending on certain factors like the breeding arrangement, climate, temperature, etc. A female Guinea Fowl from a good stock or one that is very carefully raised can also lay up to 100 eggs in a year. They are good breeders that can produce for 2 to 3 years. Some farmers have kept such species that had also provided eggs for 4 to 5 years. When in a flock, these birds lay around 30 eggs at a time, and then start brooding over them. The eggs of Guinea are brown in color. The size of this egg is half of a chicken egg, just about 40g. It has a more rounded shape on the top. The incubation period extends from 26 to 28 days.

The Guinea Fowl group is raised in farms in a similar way as chicken or turkey. The Guinea chicks experience chilling in the first few weeks, hence it should be provided protection till 4 weeks of age. They are considered very fragile; hence the kids die when the mother raises them alone.  If they are brooded on the floor, then enough shavings should be placed.  They are also raised on wire, similar to the chickens. But a cover must be placed over the wire mesh, so that the chicks don’t fall. It is a suitable bird to start farming. It also acts as a yard watch dog, which alerts you if anything strange occurs. It helps to consume the pests and insects around the house and garden premise. It is very inexpensive and easy to grow. It only requires seeds, grasses and insects to live, which helps to reduce the raising cost. The meat of this domesticated Guinea Fowl is very tasty, and somewhat has a flavor of a pheasant or chicken. The young Guinea Fowl has a tastier flesh, whereas the old bird’s flesh is tasty to casserole because it will keep the hard flesh moist. The best is to casserole in red wine along with chestnuts.  It gives enough flesh for two people to eat. It can also be substituted for chicken or turkey recipes.  Except the flavor of gaminess, it can be considered as tasty as the chicken, and will go with herbs, cider, bacons, apple etc.