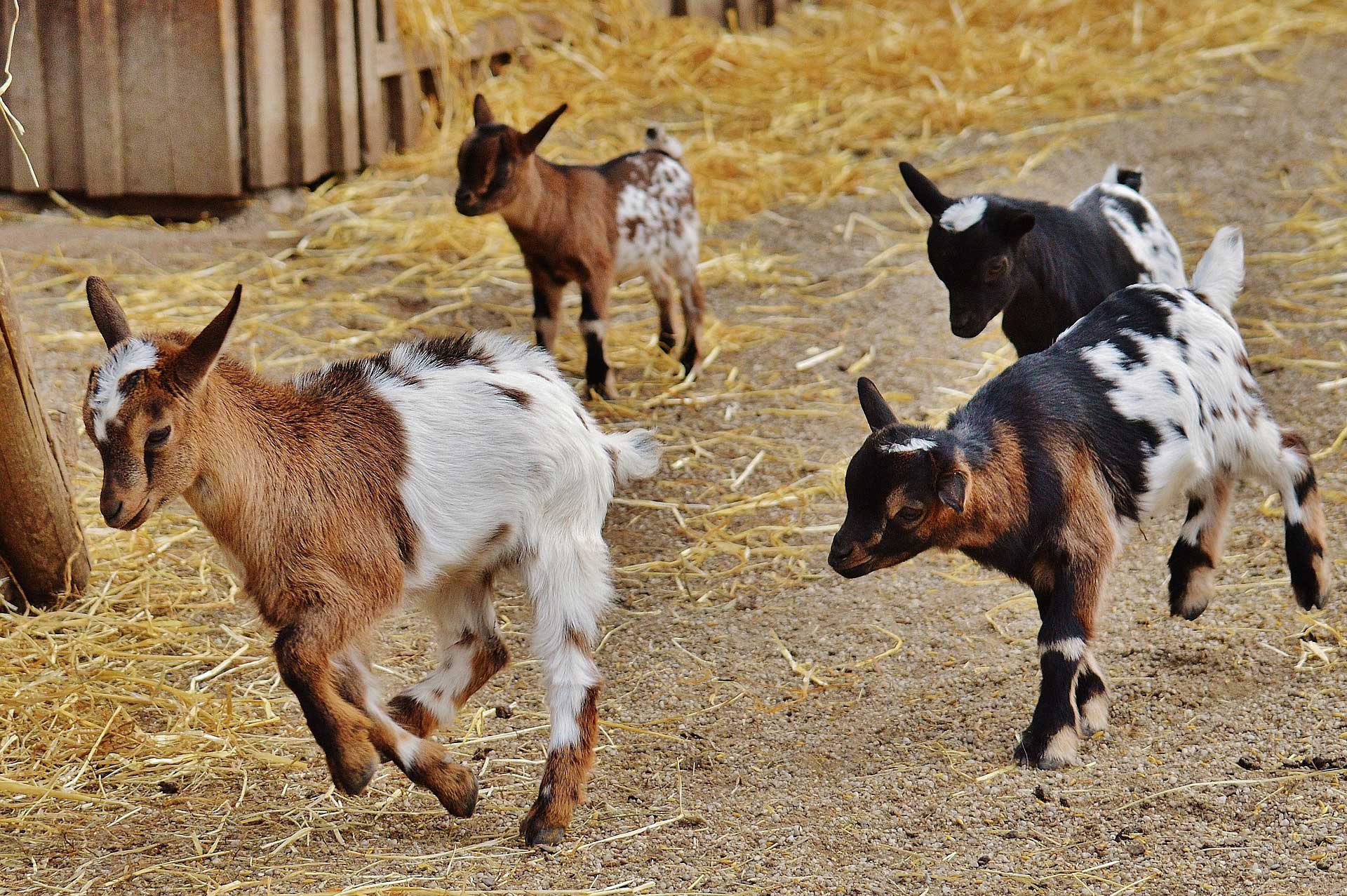 Capra Aegagrus Hircus are the domesticated species of the wild goat found in Eastern Europe and southwest Asia. It belongs to the Bovidae family, and is the close relatives of sheep, as both are from the Caprinae subfamily. There are above 300 different goat breeds. It is considered as one of the ancient domesticated animals, which was commonly bred for its meat, milk, hair or skin. According to the 2011 census by the UN Food and Agriculture Organization, there were above 924 million goats across the world.

Goats are the small livestock animals, as compared to the big ones like horses, cattle or camels, but are larger compared to the poultry, bees, cavies or rabbits. Every breed is different from each other in terms of height and weight. The weight of larger breed bucks is more than 140 kg, whereas the small goat breed is just 20-27 kg. Goats possess two horns that vary in size and shape in different breeds. This animal is known as ruminants, as they possess a stomach with four chambers, similar to the cattle. The four chambers are abomasum, reticulum, rumen and omasum. The female goat is seen with an udder that has only two teats, whereas it is four in cattle. The only exception is the Boer goat that has around eight teats. The pupil of a goat is slit-shaped and horizontal. The contrasting pupil is much visible as their irises are generally pale. This adaptation helps the goat to view at a 320 degree dimension around without any blind spots.

The age of puberty in goats is from 3 to 15 months, which depends on each breed, as well as on their nutritional status. Some breeders purposefully extend the breeding of the goats till they attain 70% weight and size of an adult goat. The estrus cycle takes place in female goats every 21 days and lasts for 2-48 hours. During this period, the doe is usually seen flagging her tail very often. She tries to stay around or beside the buck, becomes vocal in nature and also may show lack of appetite, which eventually reduces the milk production. A buck is able to breed at least 50 does in a single season, but it depends on the overall health and nutritional status. The gestation period is also dissimilar in different breeds, but mostly it does not exceed 150 days. Twins and triplets are very commonly born to the goat. Just before giving birth to a kid, the areas near the hip and tail will be sunken, and she may experience heavy breathing. Other than that, she exhibits restlessness, affection and anxiety. The placenta is usually eaten by the mother goat which gives much nutrition required by her after delivery. It also helps her bleeding to stanch.

Goats are known for eating almost anything like cardboard boxes, tin cans, paper, etc. They are known as browsing animals; hence they feed on anything, but will not gulp any inedible material. They are also very curious in nature, hence the odor of the leftover food in the waste cans or cardboard boxes evokes their curiosity, due to which, they taste everything that resembles a plant or plant matter. They can easily graze on short grass or foliage due to their mobile lips on the upper side and prehensile tongue. They are said to have fastidious feeding habits. They usually avoid soiled food, and mainly depend on fresh vegetation. Studies reveal that goats are aware of the difference between sweet, salty, bitter and sour tastes. They are also known to eat herbs and other aromatic plants, where there is lack of food supply. They require about 8 to 9 hours of browsing, which means to eat leaves of trees and bushes. It forms their main diet, and is said to give essential nutrition. Goats are said to be intelligent, as well as curious animals. They are very social and coordinated in nature. They are quite able to climb any precarious place and hold a balance with their foot. Hence, they are known as the only ruminants that have the capability to climb trees. In a herd, both the male and female goat tries to be dominant in its own category. The dominant female decides the place to graze and all the others follow her. She has much power to choose the prime spot for herself for sleeping and feeding. The male herd too has a single dominant person, who proves his strength by fighting with the other bucks. He remains as the head buck until he dies, or any younger buck defeat him.

Goats are usually considered as hardy animals that can adjust to any kind of climate with little attention and medical care. But there are a number of diseases that can affect them. Most of the diseases affecting them are related to the respiratory organs like foot rot, pneumonia, feed toxicity and pregnancy toxosis. Feed toxicity depends mainly on the location and the breed. It also depends on the different vegetables and fruits from other countries that can be toxic to diverse breeds of goat. The other bacterial and viral diseases that affect them are tuberculosis, foot-and-mouth disease, Caseous lymphadenitis, Mastitis, Caprine Arthritis Encephalitis, Pseudorabies and many more.

Goat farming or animal husbandry breeds goat as livestock. The breeding method changes according to the culture and region. Factors like the housing, feeding, reproduction and others depend on the region, where this creature is raised. In the ancient times, the goats were kept in herds that were often left on the hills to graze, and it is still followed in rural areas. Different breeds of goats are raised, mainly for their meat and milk. Mostly the male breeds are preferred for slaughtering purpose, as the female can be used for producing milk. When these goats get old, then both bucks and does are sent to the slaughter house. In countries like Nepal and India, goats are raised mostly for milk production, especially in houses. Commercial farming is also done largely for meat. The meat of goat is quite famous worldwide, and it is commonly known as mutton. The meat of goat’s kid tastes like the meat of spring lamb. The mutton is quite famous and considered as a special dish in many cuisines. It can be prepared in many ways like baking, stewing, canning, barbecuing, frying, or making curry. It is mainly used on occasions, especially in India. It is said to toughen when given high temperatures, as this meat has low fat content. The most popular meat is the Boer’s meat found in South Africa. This goat was introduced in the 90s to the United States of America, where it turned very popular later.  The Kiko breed found in New Zealand is also mainly used for meat.