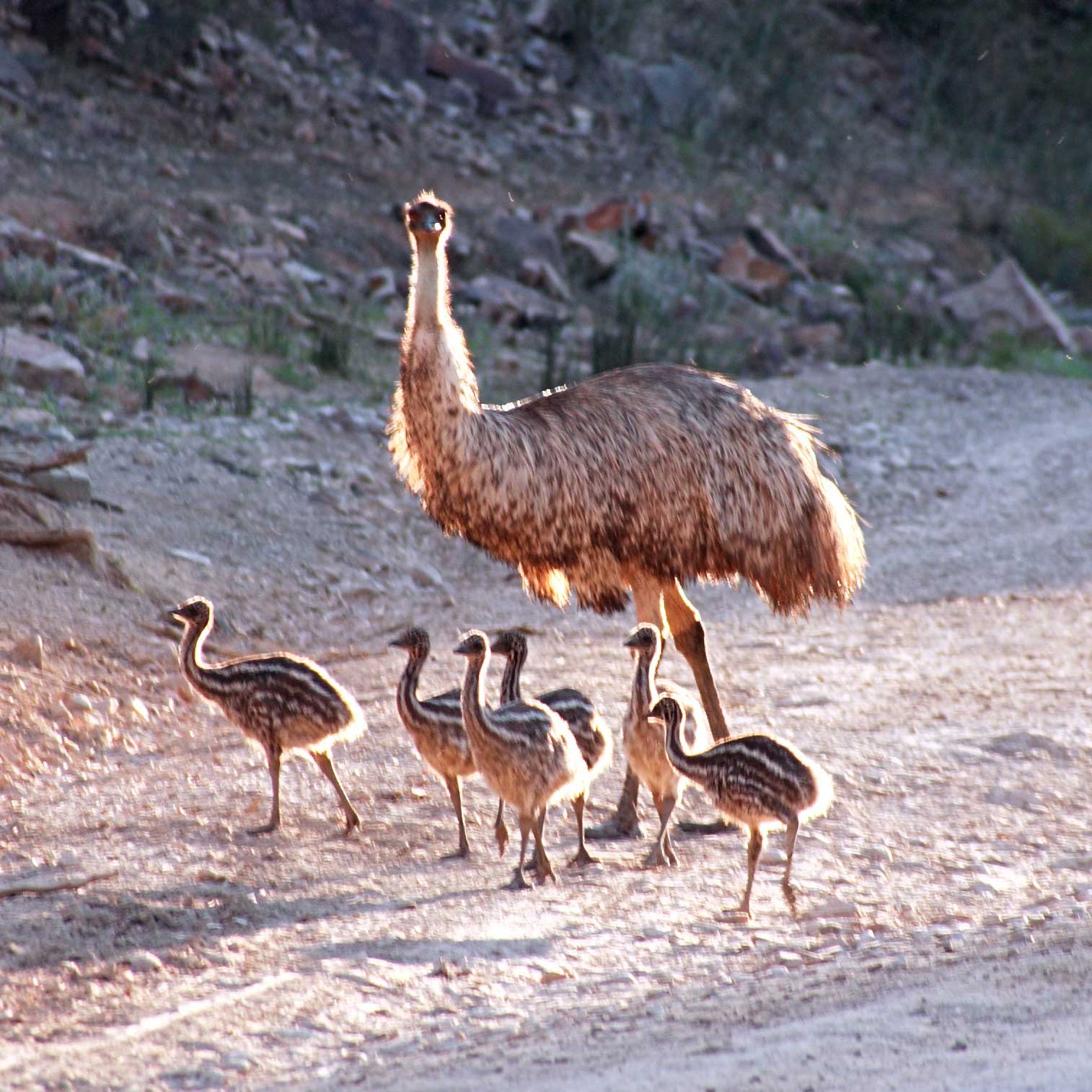 Dromaius Novaehollandiae, also known as Emu is described  as the second largest bird in the world in terms of height, the first being ostrich. This bird is native to Australia, and is considered as the largest native species of bird. It is the only living member in the Dromaius genus. The range of Emu covers the whole Australian mainland. They are Australia’s popular cultural icon that appears on various coins and coat of arms. The features of Emu are also mentioned in the Australian mythology.

Emus are brown colored, soft feathered and flightless birds with long legs and neck. It reaches a height of around 1.9 meters. The body weight of the male bird is around 31.5 kilograms and around 37 kilograms for females. It is because the female Emu is slightly bigger than the male, and has wider rumps. They are capable of traveling long distances, and can run at 50km/h, if required. They feed on a wide range of insects and plants, but can also live without eating for many weeks. They consume water less frequently, but drink large amount of water, whenever the opportunity arises.

Among Emus, breeding period extends from May till June, and the female species fight among themselves to get a mate. Unlike the other birds, here the female Emu indulges in courtship rituals. The plumage of the female Emu turns dark in shade and the hairless skin near the eyes and beak changes into the turquoise blue shade. The female is seen striding around, retracting the head and puffing out feathers. It makes low monosyllabic sounds that resemble drum beats. Once the attention of the male is received, the female circles him. If the male Emu is interested, then he will move towards the female Emu.

Within a season, the female Emus are capable to mate many a times, and produce many egg clutches. In this species, the male Emus carry out the incubation process, and they hardly drink or eat, due to which they looses their weight severely. The eggs take around 8 weeks to hatch, and the little ones are reared by the male Emu. It takes around six months for them to reach the size of a matured Emu. They stay with their parents until the next season of breeding starts. The meat of Emu bird is quite famous for its taste. It is a protein rich meat, and also possesses many nutritional values compared to the other meats. Emu meat of quantity three ounces contains only 110 calories, but has approximately 23 grams of protein, whereas the same quantity of beef meet contains double the calories compared to the Emu meat. Also, the other harmful values like total fat content and saturated fat content are very low, around 1/10 of the proportion found in beef meat. According to the American Heart Association, Emu meat is the best meat to consume as the cholesterol, saturated fat, total fat and sodium content is very less.

The Emu bird started gaining much economic importance, due to which, the Australian Government started domesticating this species of bird that lived in Jungles. In1975, the government provided the necessary conditions to establish big farms for breeding Emus. Later, it also spread to other countries like France, America, India and other countries of Europe. According to the studies and data, there are around 90,000 farms in America that rear Emus. An association for Emu was also established in the year 1993.