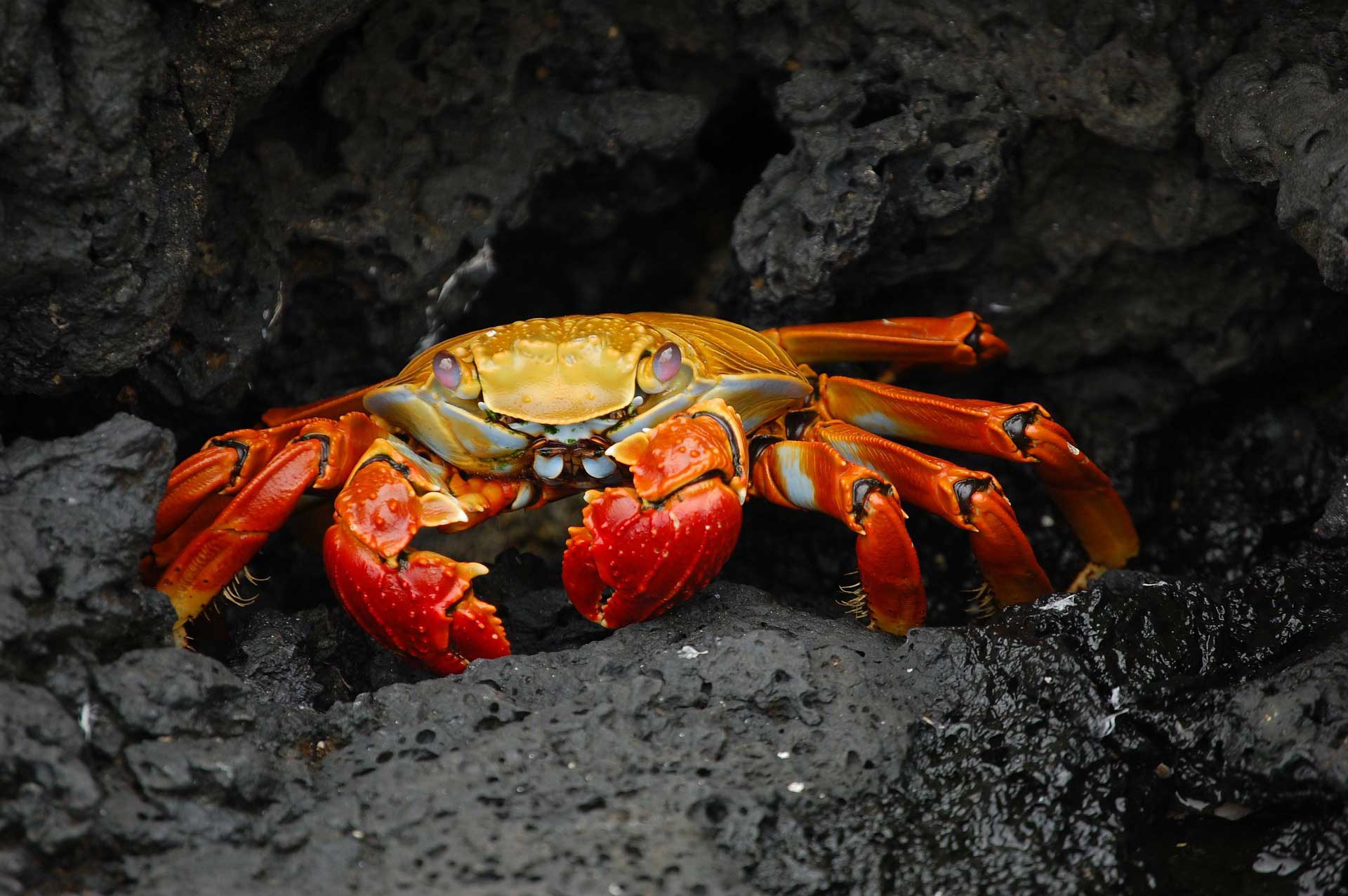 Crabs fall under the infra order called Brachyura; they are an order of the higher crustaceans with five pairs of legs. Their “tail” (abdomen) is normally reduced and bent forward under the thorax. You see them in the oceans, all the world over, on land and in fresh water. In general, they are enclosed in a thick exoskeleton. They possess only one pair of claws. Unlike other animals having names such as King Crab, Hermit Crabs, Horseshoe Crabs, the Porcelain Crabs and Crab Lice are not genuine crabs. Roughly 800 species of the crabs belong to the fresh water type, semi-terrestrial or terrestrial species. We find them in the semi-tropical and tropical regions, all over the world. Earlier, they were considered as a monophyletic group, however, at present, they are considered as representatives of two specific lineages, one of the old world and the other of the new world.

Crabs generally exhibit sexual dimorphism. The claws of the males are normally bigger, a phenomenon, especially obvious with the fiddler crabs, belonging to the Uca genera (Ocypodidae). The male fiddler crabs possess a single claw, which is very big and used in communication, especially for the purpose of attracting a mate. The shape of the pleon (abdomen) is another prominent difference. The form of the abdomen in the majority of the males is triangular and narrow, whereas that of the female is rounded and broader; the reason is females brood fertilized eggs on their abdomen.

Crabs entice a mate via chemical (pheromones) means, by sound, visual means or by vibration. Most of the completely aquatic crabs use pheromones, whereas the semi-terrestrial and terrestrial crabs generally attract the mate by visual signals, just like the fiddler crab males which gesture with their big claws and attract the females. Most of the Brachyuran crabs fertilize internally and mate belly-to-belly. In most of the aquatic species, they mate soon after the female molts and the body is still soft. The sperms are stored by the female for some time prior to fertilizing their eggs. Soon after fertilization occurs, the eggs are discharged into the abdomen of the female, beneath the flap of the tail and attached by a sticky material. In such a way they are safeguarded in the process of embryonic growth. Females possessing eggs are termed “berried”, this is because the eggs look like round berries.

On complete development, the female discharges the freshly hatched larvae in the water, and they merge with the plankton. The discharge takes place based on the tides. The miniature zoea larva swims freely and is able to float by using the water currents. The spine that they possess probably gives them safety against predation by bigger animals. It is essential for most of the zoea species to search for food; however a few of them have sufficient yolk within the eggs to tide over the larval period.

The peculiarity of the Crabs is their sideways movement, (This habit of the crab makes us refer to such movement as “crabwise”). The reason is the communication of the legs creates a sidelong gait which is well-organized. But certain crabs like the Emarginata, Libinia, Raninids and the Mictyris Platycheles, walk frontwards and backwards. Certain crabs like the Matutidae and Portunidae can swim. The hind pair of the walking legs of the Portunidae in particular is flattened into the shape of swimming paddles.

Generally Crabs are agile animals, having complicated patterns of behavior. They are able to communicate by means of waving their pincers or by drumming them. They are prone to aggression with one another and frequently the males quarrel for the females. Here are the chances for the Crabs to pick up a quarrel on rocky seashores, where almost all the crevices and caves are engaged. The Fiddler crabs (Uca genus) dig holes in mud or sand, where they rest, mate, hide, and are safe from their predators.

Crabs belong to the omnivore’s variety, their chief diet consists of algae, According to the species to which they belong, and they take other food such as worms, mollusks, many other crustaceans, detritus bacteria and fungi. Several other crabs have a mixed diet of animals and plants as a result of which their growth becomes faster and they become more fit. But in certain varieties their diet is very special. Few eat plankton, few feeds chiefly on shellfish such as clams and a few even catch and eat fish.

It is a well known fact that crabs work jointly and get food and for their family, they also protect the family. During the season of mating, the male searches for a convenient place for the female to discharge their eggs.

In certain Asian countries such as India, Bangladesh, the Philippines, Thailand, and the like, the Mud crab fetches a high price and there is a good demand in the international market. Crab meat is very delicious and it is imported from several countries the world over, yearly for consumption. Therefore exporting Crabs is a good means of earning foreign currency. Crab farming is highly beneficial, because the labor cost is quite low, the growth of the crabs is very fast and the cost of production too is relatively low.

The life style of the people in the coastal areas is developed by farming crabs on a commercial basis. Crab farming fetches more money with efficient management and care, when compared to that of farming shrimps. As days pass by, crab farming on a small scale basis is gaining popularity.

Mud crabs, most of them belonging to the genus Scylla, are seen in coastal areas, backwaters and estuaries. Two types of mud crabs are popular in small scale farming, and they are, the bigger Green Mud Crab that can grow to a carapace size of about 22 centimeters and weight of about 2 kilograms, characterized by their appendages having polygonal markings, and the smaller Red Claw Mud Crab a burrowing type with a maximum size of about 12 centimeters, without polygonal markings.

Two Systems of Farming Are Identified for the Mud Crabs.

This is a pond based system with an area of 0.2 hectares to 2 hectares.
Build a fence round the pond if it is small, or otherwise, strengthen the banks and the outlets if the pond is bigger.
Collect juvenile crabs weighing around 10 to 100 grams each, and, on an average grow I to three crabs per square meters of water
You can give them a diet of shrimps, fish of low cost, crabs of small size, rotted fish, bird and other animal’s innards. The feed must be at least 5% body weight of the crabs. If, for example, there are 1000 crabs of 200 grams each, feed them 10 kilograms
Verify the average weight of the crabs regularly, to correspondingly alter the feeding rate
The crabs will be ready for the market in 5 to 6 months

In this system, soft shelled crabs are raised in controlled conditions in ponds until their exoskeletons harden. Hard shelled crabs fetch a much higher 300-100 % more value than the soft-shelled variety. In this system, the crabs not only grow faster, but return profits to the farmer much in advance.

You can employ two ways of fattening.

Small well prepared tidal ponds, 1-1.5 meter deep, and 0.2 – 2 hectare area, are ideal for this type of farming.  You normally prepare a pond by sun drying it, first, adding lime at the base and erecting fencing around it, using bamboo to reinforce the inlet areas and then stocking the soft crabs you buy from fishermen. Compartmentalize the crabs in the pond as per their size, and keep the females and males apart to reduce the possibility of cannibalism. You can conduct around 10-12 flattening cycles annually depending on the circumstances. Collect and sell the crabs when they attain 300-500 gram weight in hard-shelled condition.

For this, you have to use floating and netted cages or bamboo cages and apply them in waterways of shallow estuaries. HDPE Netting, Nylon Netting or Bamboo cages of 3meters x 2 meters x 1 meter height will be ideal. Keep the cages in rows and stock 5-10 crabs per square meter of the cage. This method is employed only on a small scale, while commercial production is not only more profitable, but best done by the pond fattening method. In different parts of the world, crab is cooked and eaten in various ways. Certain varieties of crabs are eaten along with the shell, they are the soft-shell crabs; in certain varieties, only the legs or/and claws are eaten. Legs are preferred, particularly where the crabs are big, like the snow crab. Generally in the culture of the East Asian countries, they eat the roe of the female crab. In fertilized crabs, they are yellow or orange in appearance.

The most important  countries where crab is exported  to are France, Japan, Hong Kong, Spain, Canada, the US and Portugal.

The culinary is improved in certain regions by the use of spices. The dishes rich in spices are the chili crab, masala crab, which is consumed in the South East Asia and also in Indonesia. The blue crab is frequently a dish for the regions of Chesapeake Bay along with Old Bay Seasoning. Snow crab legs and Alaskan king crab legs are normally just boiled and garnished with lemon butter and garlic.