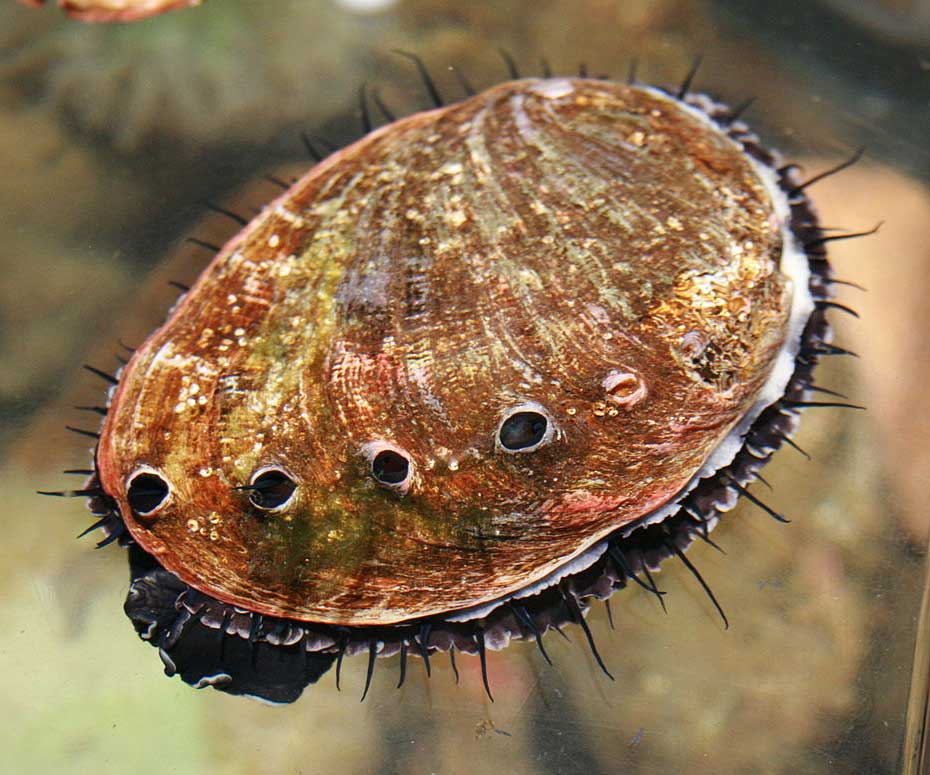 Abalone refers to a group of edible snails residing in the sea. It comprises of both small to big sized snails that are marine Gastropod Molluscs in the Haliotidae family.  The other synonyms are Sea Ears, Ear Shells, Muttons Shells, Muttonfish, Pāua and Ormer. The family Haliotidae consist of only one genus and around 4-5 sub-genera. More than 100 species have been identified worldwide under this genus and sub-genera. Out of this, the species Haliotis Midae is most commonly found and regularly raised in South Africa. It is also found around the regions of Dyer Island.

The most distinct part in the body of an abalone is its shell that comprises of respiratory pores arranged in rows. These shells are popular due to its inner layer with iridescent color. It has a muscular foot with a powerful suction power that helps to attach itself tightly to any hard or rocky surfaces. The shell is attached to the body with a group of shell muscles. The mantle and a sensory organ known as Epipodium extend from the foot and bear tentacles and circles the abalone’s foot. The surface of this Epipodium is pebbly or smooth in texture, whereas its edge is more scalloped or frilly. This distinct projection in their body can be used to identify any abalone species. It has its internal organs well arranged under its shell and near the foot. The other striking organ known as gonad with a crescent shape is mostly cream shaded in males and green or gray color in females. This organ extends towards the rear part of the body and to the opposite side of the pores. An abalone consists of a mouth, two eyes and a pair of enlarged tentacles. It also has a file-like tongue known as radula that helps to scrape any algal material into a size that can be gulped by them.

The chamber of gills is near to the mouth, and situated exactly at the base of the respiratory pores. Water is absorbed by the base part of the shell’s edge, and then discharged from the pores after flowing across the gills. This movement of water helps to carry out the reproductive and waste products out of the body. It is said to be a primitive creature as it does not have a brain structure, but it does have a heart on the body’s left side and a bluish green blood that flows through veins, sinuses and arteries.

Abalone has both the male and female sex, which is easily distinguishable since they attain a size of one inch in length, because at this stage, the gonad starts to develop. The sperms and eggs are released through the pores due to the water current. This method is called broadcast spawning. An abalone of 1.5 inch length has the capacity to spawn a minimum of 10,000 eggs at a single time, whereas the capacity of an 8 inch long abalone is more than 11 million eggs. Spawning depends on many factors like the temperature of the water, day length and similar other factors. The other abalones are also stimulated to spawn due to the presence of sperm and eggs in the water, thereby increasing the fertilization chances.

The larvae hatched from the eggs look microscopic, and are free flowing ones that float for more than a week in the water. Later, the larvae settle down at the bottom and lose their hairs used for swimming, also known as cilia, and then start to develop the shell of an adult. If the habitat is suitable, then they will transform into adulthood. Generally, the mortality rate of larvae is 99%, and hence very few out of those thousands survive, and transformed into an adult abalone.

This abalone hybridization is very common in the habitats, where all types and species of abalone are found. Many species hybridize, and the most common are the white and red abalone with pink.

Abalones are herbivorous in nature, and eats only types of algae. They mainly feed on the marine algae, both in the farm and in the wild. The adult forms mainly feed on the particles flowing in the water current. The most preferred alga is the large brown algae, bull kelp, giant kelp, elk kelp and feather boa kelp. In the commercial farms, good quality food is manufactured and provided to these creatures to keep them healthy, and to attain a good quality meat from them.

Basically, the adult abalone stays in one place, and awaits the food particles to drift by. But, if the food becomes scarce or unavailable for a long period of time, then it may tend to change its location daily. The different color banding visible on the shells of abalone is due to the feeding on different forms of algae.

Abalone farming was started at the end of 1950s in China and Japan. By the period of 1990s, many farmers started to raise abalone for commercial purpose, and found it successful. It was commercially raised, mainly for consumption purpose. Poaching and overfishing has led to the reduction of the wild abalone population, and hence, the main contribution for the consumption of abalone meat is from the commercial farming. The abalone farming is mainly carried out in countries like Korea, China, Japan, Taiwan, Canada, Ireland, Namibia, France, New Zealand, Thailand, Iceland, South Africa, Australia, the United States, Mexico and Chile. Abalone has been considered as a nutritious food for humans since long time across the world. In Latin America, the meat of Abalone is still considered as a delicacy. In the China, this creature is termed as “Bao Yu”, and constitutes an exclusive part of their banquet. Similar to the other luxurious dishes like bird’s nest soup or shark fin soup, abalone is also considered with the same importance in special occasions like weddings and other festivals. Though, once it has been very rarely available, commercial farming has made it more commonly available for consumption. Its popularity increased following the Panama–Pacific International Exposition in the year 1915.

In Japanese cuisine, abalone is used both in the raw and cooked state. Raw abalone meat is mainly included in dishes like Awabi Sushi and sometimes used salted, boiled, steamed, simmered in sauces or they are chopped. In California, the meat of abalone is used mainly to fill pizza, or they are used in the steak form with flour or cracker meal and sometimes with caramelized mango.

In the period of 1920s, when the abalone meat has been very rarely available and much popular, it had a price of around $7 dollars for a portion served in a restaurant, which had increased to $75 in the year 2004.