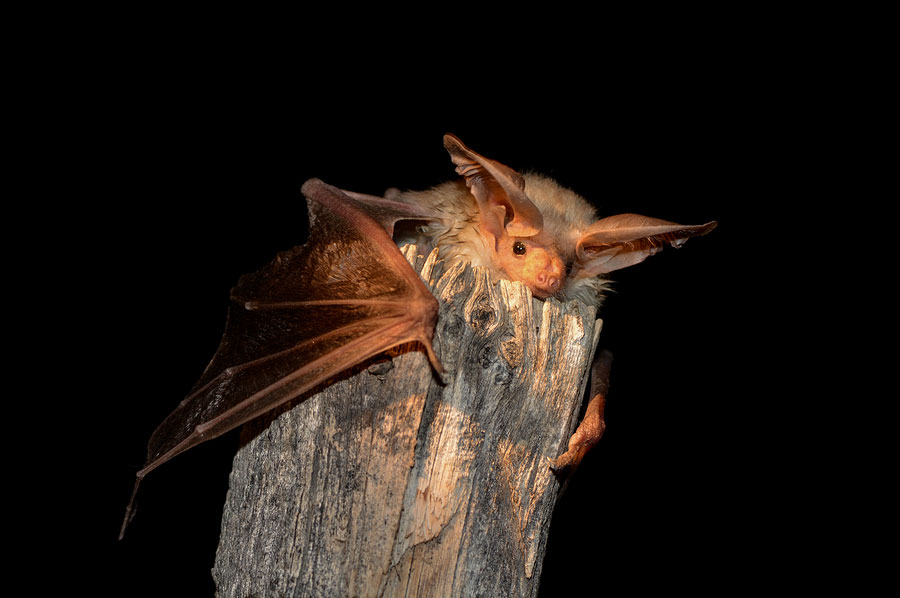 The Pallid Bat (Antrozous Pallidus) is a very large bat. As its name implies, it is pale in color, with yellow and brown tones. Even its ears are large, at two and a half centimeters. They are wide as well, not to mention naked, with nine to eleven lines crossing them in a transversal pattern. There are fairly large spots located between its shoulders, which are also light in color. Its underside is even paler. Glandular ridges surround its nostrils, so its snout is very blunt.

In general, Pallid bats prefer rocky areas, typically in outcrops. They like to roost in the rocky crevices. They also like caves and tunnels, such as those located in mines. However, they are not above choosing more domestic digs either. For example, they are extremely fond of roosting in attics. They also like eaves, whether they are located on a house or a barn. They can sometimes be found nestled just behind signs and inside of hollow trees. Down south, such as in Texas or New Mexico, you can frequently find them in adobe houses, usually those that have been abandoned.

Most bats do, of course, exist in colonies, and the Pallid bat is no exception. However Pallid bats form very small colonies. It is not uncommon for one of their colonies to contain only about twenty bats. The largest usually do not contain more than one hundred Pallid bats. This Pallid Bat was found at the Escalante National Monument

True to form where bats are considered, Pallid bats prefer going out late at night, after it has been dark for a while. The majority of the species is given to migration. All the same, though, sometimes single pallid bats have been known to remain in the United States during the winter months. As you might expect, however, these are mostly the bats that live down in the southern states with warmer winter climates.

Pallid bats are not at all like their other bat brethren when it comes to eating and diet. Quite often, you can find leftovers located beneath the roosts where they choose to feed. Frequently, these leftovers will contain wings and the harder parts of insects. Studies have indicated that Pallid bats have a real taste for Jerusalem cricket, scorpions, and other similar insects that do not fly. Clearly, however, Pallid bats also like their food on the fly, so to speak, and they do eat winged insects as well. For instance, they appear to like moths, froghoppers, June beetles, and even grasshoppers, just to name a few. To find food, they will fly over an area anywhere from fifteen to ninety centimeters over the ground before diving down, grabbing the prey, and taking it off to their preferred feeding roost.

Pallid bats mate during the early summer months. The female of the species carries between one and four embryos in her womb. Surprisingly, twins are very common. The gestation period can last anywhere between fifty-three to seventy-one days. When they are just born, Pallid bat babies are very tiny, weighing in at only three grams or so. They develop quite slowly.