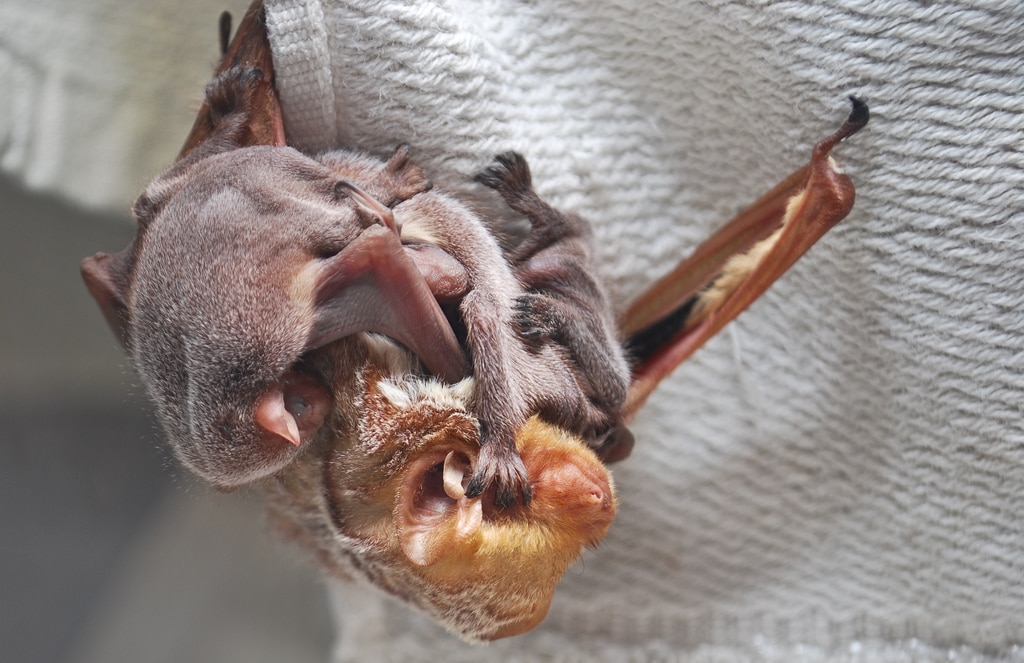 Lasiurus Borealis, the Eastern Red Bat, is just about medium in size and, as the name implies, has a distinct red color (see picture). It has short ears that are broad, rounded at the tips, and slightly furry. It is very difficult to mistake the Eastern Red Bat with any other of its bat brethren. This bat looks a little frosted, due to white tips on its reddish fur  at least in the females. The majority of the males in this species do not have white tips on their fur. As such, they tend to look much more red than the females. Their average length is one hundred and eight millimeters and in general they weigh anywhere between ten and fifteen grams.

Eastern Red Bats prefer to dwell in the forests and, for the most part, they are creatures that enjoy solitude. They are a primarily solitary species of bats. They are not the only solitary species, of course, but unlike most other species in North American they will roost either out in the open or up in trees. Although most bats enjoy the occasional cave or tunnel, the Eastern Red Bat usually do not even consider them as a possible roosting site. They greatly prefer trees, especially the foliage. Down south, they are not above going to roost in a lush hang of Spanish moss. Their love of this and tree foliage is due to the fact that, when concealed in a proper roost, a roosting Eastern Red Bat will look quite a lot like a red leaf. Like most other bats, the Eastern Red Bat migrates, going north in the spring and south in the fall. Typically, they like to spend the winters in the southern portion of the United States, as well as locations south of the border, like Bermuda, Mexico, and the Antilles.

When they feed, they like to go out during the early evening hours. They hunt near to the ground and prefer to do so in orchards and shaded groves. They tend to be territorial in their feeding patterns. Their favorite prey consists of insects that fly at night, namely winged ants, moths, planthoppers and leafhoppers, and any number of different beetles, such as scarabs, ground beetles, and assassin beetles.

The Eastern Red Bat breeds in a number of different locations. Some of the baby bats are born way down south in the United States, such as Texas, while others are actually born way up in the southern portions of Canada. The babies are usually born in the late spring or early summer: May, June, or July. The Eastern Red Bat differs from other bats in how many babies they produce at one time as well. A lot of bats can only carry one to two embryos, but these bats can carry anywhere up to four. Typically, the females carry three on the average.