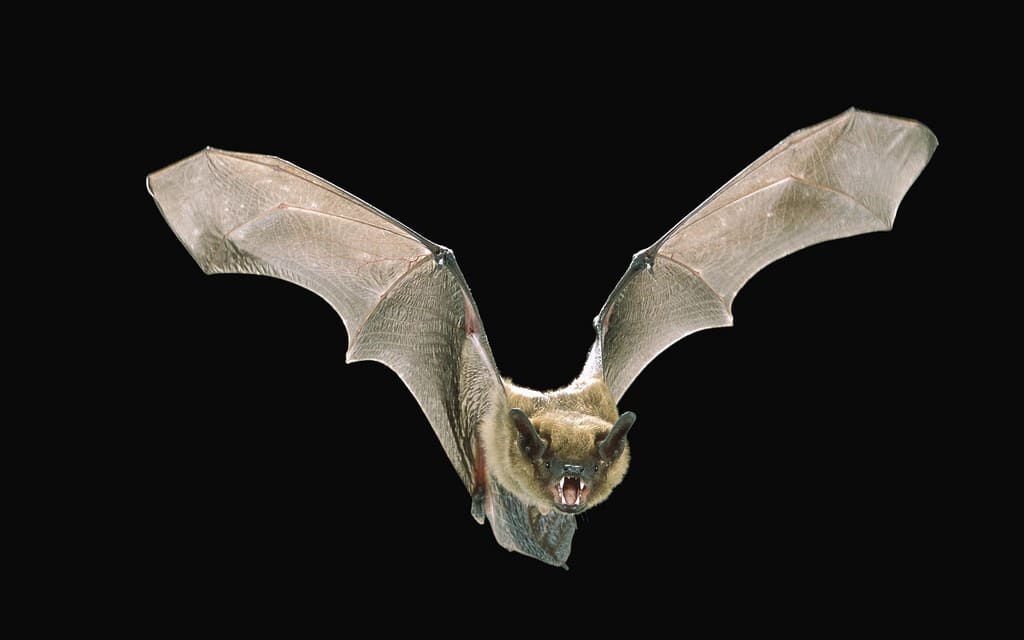 The Big Brown Bat, which is also referred to by its scientific name of Eptesicus Fuscus, can be found in the south of Canada, as well as temperate areas of North American.  They are also indigenous to parts of Central and South America, as well as the West Indies.  They are no less versatile in their specific roosting locations.  You can find the Big Brown Bat in large cities, small towns, and of course in rural locations.  Surprisingly, it is not at all common in areas that have heavy forests.  They prefer a very stable environment and an extremely well insulated habitat, which is necessary for their hibernation.  The Big Brown bat has a stronger, more adaptable constitution than most of its brethren, so it can stand winter climates better.

So what sort of habitat is their favorite? Like many other bats, the Big Brown Bat will frequently take up residence in domestic dwellings (see picture).  Also like other bats, the Big Brown likes barns, silos and even churches.  You can even find these bats roosting in storm drains, sewers, expansion joints in stadiums, and in copper mines too.  Clearly, they are versatile in their choice of home.  Before much of the world was settled, they frequently inhabited hollows in trees, natural caves, and the rocky crevices in ledges, cliffs, and outcrops.  Even today, you can still frequently find Big Brown bat colonies living in trees.  Quite recently, a batch of them was found in caves located in Minnesota, hibernating the winter away. But along with civilization came human habitats and the bats prefer those to their natural habitats.

As you would expect, the Big Brown Bat is a big, brown bat.  They average between one hundred and ten and one hundred and thirty millimeters in length.  Their tails run about half the length of their bodies and their wingspan runs approximately thirteen inches  thats over a foot across!  The females are bigger than the males.  Their heads are big as well, and they have thirty-two sharp, potentially lethal, and very heavy teeth (see picture).  They do indeed look brown but colors can run the gamut between tan with pink undertones to a color like rich, dark chocolate.

As mentioned, the females tend to be longer, a species trait which is known as sexual dimorphism.  The breeding season for the Big Brown Bat is in the fall  later rather than in the earlier months.  The female of this species can carry one to two embryos in her womb at a time and the normal gestation period lasts about sixty days.  At birth, the babies only way about four pounds but they can be weaned anywhere between eighteen days and thirty-five.  They take up to 2 years before they are old enough to breed. These bats eat insects (see picture), so they are known as being insectivorous.  They particularly enjoy eating beetles.  They also enjoy certain types of  flies, moths, winged ants, and even dragonflies.  They typically eat only when the whether is warmer, which means they have to eat a lot to store up for the winter, when they hibernate.